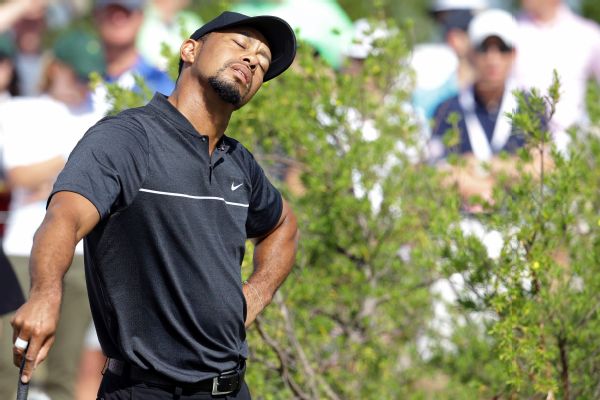 NASSAU, Bahamas -- After a 15-month layoff that included two back surgeries and numerous doubts about his future,Tiger Woods returned to competitive golf Thursday with a flurry of front-nine birdies and a back-nine dose of reality.

It was a mostly positive first round at the Hero World Challenge, where Woods exhibited a golf swing that was under control, a putting touch that helped save a few shots and a short game that should help put aside some of the conjecture associated with previous chipping problems.

But two double-bogeys over his last three holes and several missed drives to the left over the back nine marred what was an otherwise solid effort: 1-over-par 73 at Albany Golf Club that beat just one player in the 18-man field.

"It felt good,'' Woods said after his first competitive round in 466 days. "I felt the feel of the round by the second hole, the tee shot. I can feel the round, and that was nice.

"And once I got into the feel of the round, got off to a nice start, I was 4-under par there for a little bit. Unfortunately, hit the ball in three bushes and had a water ball, so consequently I let a really good round slip away at the end.''

Woods was briefly tied for the lead but ended up in 17th place, beating only Justin Rose -- who has been taking it easy since the Ryder Cup with his own back issues. Woods did reach 4 under through eight holes behind an impressive display of driving, iron play and chipping. He birdied three in a row starting at the sixth, then barely pulled his tee shot on the par-5 ninth. His ball came to rest in a scruffy, sandy area, leading to a bogey after a poor chip shot.

He still turned in at 3-under 33, but he played the remaining 10 holes in 5-over par, with a birdie, two bogeys and two doubles.

"His swing looked good,'' said Patrick Reed, who played with Woods and shot a 72. "When he hit it well, it was really, really good, and when you mishit it, it was kind of ... they weren't very good misses.

"But at the end of the day, to take off as much time as he had and come back and be his first competitive round and to have the kind of spurts that he had throughout the round, it was good to see because there's nothing like hitting balls on the range and practicing and going out and playing some holes. But getting under the gun like that, it was cool to see.''

Woods will rue two bogeys on par 5s (the ninth and 11th) and a double-bogey at the 16th after a perfect drive. At the 18th, he tried to cut too much off the corner -- it seemed a 3-wood would have been plenty of club off the tee -- and his tee shot found the water. That led to another double-bogey.

Woods hit just six of 13 fairways and 11 greens in regulation. He needed just 26 putts. The fairways he missed were all tee shots that went left, either pulled or hitting too much of a draw.

"I just made some mistakes,'' said Woods, 40, who won the last of his 79 PGA Tour titles in 2013. "I tried to hug that left side on 9, tried to get it down that corner and it just stayed up in the bush there, made a mistake. Tugged it up the left side on 11. Tried to hit one really hard and made a mistake there, put it in another bush on my layup.

"I just made some really, if you look at it, some really silly mistakes, mistakes I don't normally make. But I haven't played in a while. Unfortunately, I made those mistakes, I can clean that up. We've got three more days.''

Woods is nine strokes back of tournament leader J.B. Holmes, who shot a 64. But given all the scrutiny of Woods' game and overall lack of preparation, few were going to put much emphasis on how he fares on the tournament that benefits the Tiger Woods Foundation.

Eleven of the top 20 players in the world are entered. Woods came in ranked 898th in the world; he slipped down the rankings due to inactivity. His last tournament was the August 2015 Wyndham Championship, where he tied for 10th. He then had back procedures in September and October of 2015, which led to a lengthy rehab with "no light at the end of the tunnel'' and then a summer in which he skipped all four major championships.

After serving as an assistant captain for the U.S. Ryder Cup team, Woods withdrew from the Safeway Open in October after committing to the event just a few days before. But he prepared for this event and showed plenty of promising signs in practice this week.

"There was plenty of good stuff, plenty to build on,'' said Woods' caddie, Joe LaCava. "And some of what happened can be expected.''

Woods said he felt a bit fatigued afterward, and managing his back is always going to be part of the process for him now. It was also extremely hot here Thursday, more so than any other day this week.

"It felt good to have that adrenaline surging through the system again,'' Woods said. "It's been a long time. To get up there on that first hole and feel it again and then dumb it down to be able to control it and get into my feel where I play my best, that was nice. I got it pretty quick. By the time I got to the second or third hole, I was already in it.''

Tiger's hot start tempered by rough finish
After a strong performance on the front nine, Tiger Woods records two double-bogeys over his last three holes and finishes with a 1-over-par 73 at the Hero World Challenge.