Howard can block trades to 20 teams 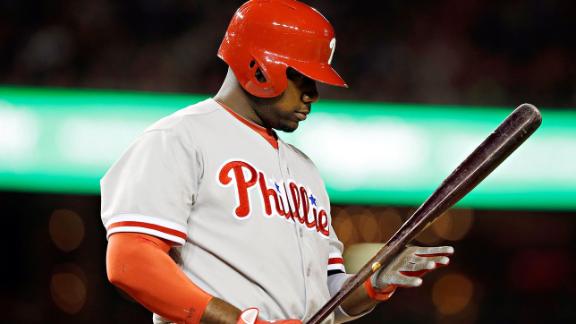 Under the terms of Howard's five-year, $125 million contract with the Phillies, he can block trades to 20 teams. That leaves only nine clubs where Howard can be traded without his permission.

Howard's list appears to be about strategy as much as personal preference. Most of the nine teams where Howard can be traded without his consent either have small payrolls or no need for a first baseman/DH, so the list doesn't appear to provide many promising options for Amaro.

According to a report by MASN's Roch Kubatko, the Phillies recently tried to package Howard with outfielder Marlon Byrd in trade talks with Baltimore, but the discussions went nowhere. The Phillies subsequently dealt Byrd to Cincinnati for minor league pitcher Ben Lively.

The Phillies have made no secret of their desire to trade Howard, who turned 35 in November and will earn $25 million in both 2015 and 2016. The Phillies have a $23 million club option for 2017 with a $10 million buyout, so Howard is guaranteed a minimum of $60 million through the end of his contract.

Amaro already has traded Byrd and fellow veterans Jimmy Rollins and Antonio Bastardo this offseason in response to the Phillies' 73-89 record and last-place finish in the NL East.

During a recent radio appearance on 97.5 The Fanatic in Philadelphia, Amaro indicated that a trade would probably be in the best interests of both Howard and the Phillies.

"We've talked to Ryan,'' Amaro told the radio station. "And I told him that in our situation it would probably bode better for the organization not with him but without him. With that said, if he's with us, then we'll work around him. We'll hope he puts up the kind of numbers that we hope he can and we'll see where it goes from there."