If Barry Bonds isn't a Hall of Famer by the end of the day, it's a failure by the Hall of Fame 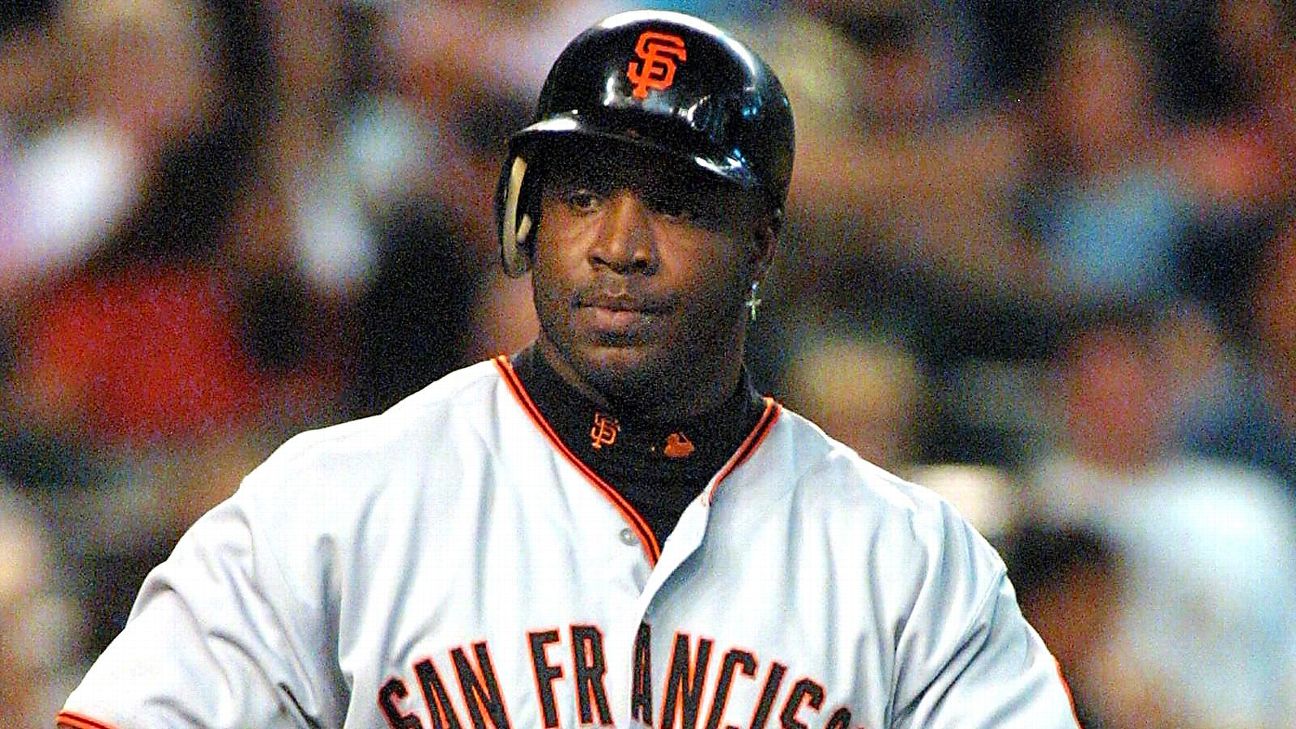 At the entrance to the National Baseball Hall of Fame's plaque gallery, a sign hangs to help guide museumgoers through what they're about to see. The first paragraph talks about how players are in the Hall for "their accomplishments in the game." The next paragraph says other areas of the museum "address the totality of their careers." The final paragraph ties it all together: "The National Baseball Hall of Fame and Museum's mission is to Preserve History, which is what we seek to do throughout the Museum."

If indeed that is the Hall's mission, today is nothing less than an abject failure. Barry Bonds, arguably the greatest hitter in baseball history, inarguably worthy of induction, did not reach the 75% threshold in his final year on the writers' ballot. For the past nine years, at least one-third of the baseball writers who adjudicate such matters have found Bonds' use of performance-enhancing drugs to be disqualifying, and the revelation of Tuesday's vote is not expected to render any different judgment. He's not the only one, but Bonds' rejection, in particular, epitomizes how all these decades later, baseball is still bungling the PED issue, valuing a lazy, ahistorical moral referendum over the preservation of history.


It's difficult to pinpoint what's most frustrating. Perhaps it's that there already are players in the Hall accused of using PEDs. Or that the commissioner whose tenure encompassed the entirety of the steroid era, Bud Selig, is himself enshrined. Or that generations of players before Bonds, including manifold Hall of Famers, popped amphetamines as part of their pregame routine. Or that others honored with bronze renderings include multiple racists, domestic abusers and even a player who last year resigned from the Hall's board of directors after a woman levied credible sexual misconduct allegations.

Really, maybe it's just as simple as the guy with the most home runs ever should be in the museum that exists to tell baseball's story.

The campaign against Bonds has spanned decades, involving malfunctions of fairness and logic across multiple cohorts.

It starts with Major League Baseball and the blind eye that Selig, his office and the game's stewards turned toward PEDs. From there came the duplicity of riding the steroid wave to new stadiums and bigger TV deals and exponential revenue growth while villainizing the very people who fueled it. Mark McGwire and Sammy Sosa and everyone else hauled before Congress made for great scapegoats, but the treatment of Bonds by the league has extended well beyond that. Selig fumed that Bonds was breaking the home run record of the eminent Henry Aaron, all but affixing an asterisk next to Bonds' final total of 762 and single-season record 73. Following the 2007 season, when Bonds, at age 43, remained one of the best hitters on the planet, not a single team offered him a contract. Even though an arbitrator ruled it wasn't collusion, it clearly was something: Baseball telling Bonds he wasn't welcome.

The message traveled to Cooperstown, where that same year, McGwire's candidacy forced the Hall of Fame to reckon with the question that would dominate the next 15 years: Will voters honor PED users? Among the writers who decide such things, there was confusion. What did the Hall want? Though the institution never lobbies for or against players, it could have offered some sort of guidance on players who had used PEDs. Did the so-called "character clause" -- which tells Hall voters to consider a player's "character" as one of the six attributes when considering worthiness -- apply to the use of PEDs? Or should writers take into account that these players existed in an environment where cheating was extremely prevalent?

It was a moment at which the Hall could have embraced and taken the right stand -- that as ugly as this history is, not telling its full story would amount to whitewashing this seminal moment in the game. Instead, the Hall absconded from its leadership duties -- and punted. "We are telling the story of the steroid era just the way we tell the story of any era in baseball, and we tell the story in its simple truth," said Jane Forbes Clark, the longtime chairman of the Hall, a decade later, in 2017. "And that's how the museum is going to deal with it."

The simple truth is that Barry Bonds is the story of the steroid era. He is a player whose physical gifts knew no limits -- and whose desire for something beyond greatness took him to a place he never needed to go. His greed mirrored the league's: the ceaseless pursuit of bigger, better, more. This is the history that demands to be told, and there is no better place to tell it than in the plaque room at the Hall of Fame.


There should be no running from it, no denying it -- not if you're a museum. Yet the closest thing writers who wanted some clarity on how to handle PED users have ever gotten from the Hall came in a November 2017 email written by Joe Morgan and blasted out to voters by the Hall. "The Hall of Fame Is Special" read the subject line, and from there, Morgan vomited out more than 1,000 words of anti-PED propaganda. "Steroid users don't belong here," Morgan wrote, even though he knew they were there already.

Six years before that, when Bonds was drawing in 36.2% of the vote, Clark had said: "I think the writers are doing a very good job." By the time of Morgan's email, that number had jumped to 53.8%, and the threat of him and Roger Clemens making the Hall was starting to feel like maybe it could happen.

The Baseball Writers' Association of America ensured that it won't on its watch. Even as support jumped to 61.8% in 2021, nearly two in five writers who cast their ballots looked at Bonds not as the most fearsome hitter any of them had ever seen but as the league and Hall presented him: a big, anthropomorphized needle filled with icky yuck-yuck juice.

We should be able to acknowledge that Bonds is a cheater, bemoan his actions and argue persuasively that he belongs in Cooperstown anyway. Even those who take the Hall of Fame seriously enough that they believe by excluding Bonds they're protecting it are obligated to acknowledge that history, the museum's mission, can be complicated and disappointing and sad.

Messing with history is a dangerous game, especially coming from a group entrusted with writing it. But that's what the BBWAA did today, and it passes the onus on to ... the Hall. In December, it will convene its Today's Game era committee, which is tasked with voting on anyone who played from 1988 to 2017 and was overlooked by the writers. This group of 16 electors, comprising Hall of Famers, executives and media members, voted for Selig to be inducted in 2017 and two years later selected Harold Baines, who did not have Hall of Fame numbers but did have enough friends on the committee to wind up in Cooperstown.

Bonds should be on the ballot, though if Morgan's letter is any indication, his candidacy is dead on arrival. Getting 12 of 16 votes from era committees is difficult enough without being a cause célbre. His name will remain on the ballot -- and his fate in the hands of the Today's Game committee -- ad infinitum.

We can spend all the time in the world wishing it were less complicated, straightforward, black and white, a hero's journey. That doesn't always happen. All these decades later, Shoeless Joe Jackson and Pete Rose remain pariahs; and with Bonds, Clemens and Curt Schilling, the Hall is uninviting three more -- the former two for using PEDs, the latter for saying heinous things.


Unlike Jackson and Rose, Bonds is not banned. Those who see this whole process and find it abhorrent can continue to stump for Bonds, to suggest that perhaps it isn't in the best interest of the museum that exists to tell baseball history to essentially ignore someone so imperative to its mission. After all this time, Clark was right: The simple truth is evident.

The National Baseball Hall of Fame needs to induct Barry Bonds. There are so many simple solutions, ones that would satisfy the Hall's stated mission and recognize that it's possible to celebrate the player Bonds was while bemoaning the choices he made. All it takes is the right words on the plaque. And since the Hall won't do it this year, it seemed like the proper time to take a crack.

That is Barry Bonds, and that is how you Preserve History. 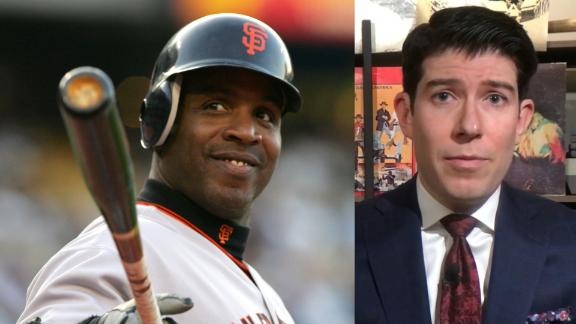 Passan: Bonds not getting HOF nod is 'a true shame'
Jeff Passan explains why Barry Bonds should be elected to the Baseball Hall of Fame. 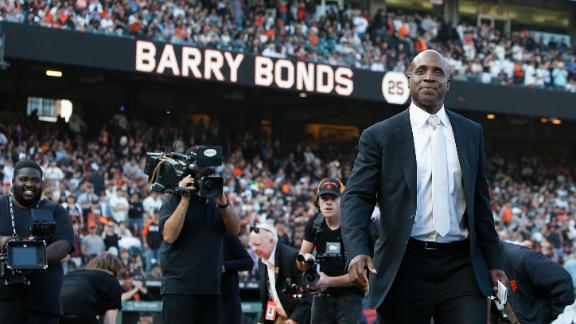