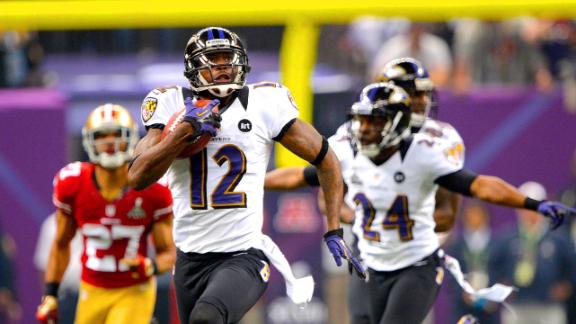 The San Diego Chargers and free-agent wide receiver Jacoby Jones have agreed to a two-year deal, the team announced.

"One of our offseason goals was to improve our special teams, specifically upgrading our return game," Chargers general manager Tom Telesco said. "We feel Jacoby brings a dynamic aspect to our kick and punt returns that we need, and he also has solid experience playing wide receiver."

The Baltimore Ravens cut Jones in February following a difficult season for the former Super Bowl hero. A year earlier, he had re-signed with the team on a four-year, $12 million deal.

Jones, 30, dropped five passes as a receiver and muffed two punts in 2014, and the Ravens decided to avoid paying his $2.5 million salary for the 2015 season by cutting him.

Despite his struggles, Jones was one of two players to rank in the top 10 last season in both kickoff and punt returns. (Cincinnati's Adam Jones was the other.) Jacoby Jones finished second in the NFL in kickoff returns (30.6-yard average) and returned a kickoff 108 yards for a touchdown at Pittsburgh.

Jones made little impact as a receiver last season, catching his fewest passes (nine) since 2008. He dropped too many passes and quickly lost his job as the No. 3 receiver.

It was only two years ago when Jones helped the Ravens to a Super Bowl title. He caught a 56-yard touchdown pass and scored on an 108-yard kickoff return in the Ravens' 34-31 victory over the San Francisco 49ers. Earlier in that title run, he caught a 70-yard touchdown pass with 44 seconds left against the Denver Broncos that helped force overtime in a 38-35 divisional-round victory that sent the Ravens to the AFC Championship Game.