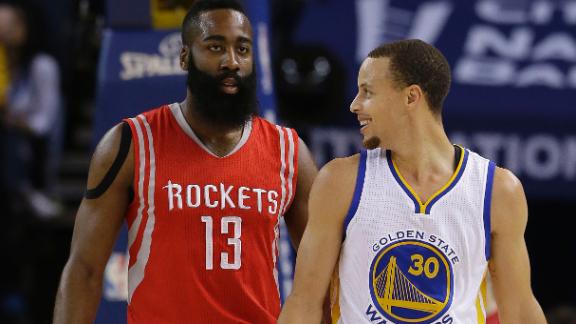 HOUSTON -- Rockets guard James Harden, the NBA's leading scorer, said if it was his choice, he would win the MVP award.


He isn't taking anything away from Golden State Warriors guard Stephen Curry, it's just that Harden feels his numbers are good. Very good.


"Yeah, I think I've done enough; that's not my main focus," Harden said Friday morning before the Rockets' 104-103 loss to the San Antonio Spurs. "It would be a blessing and a great honor, something that I've dreamed of as a kid. I think every kid dreams that, of being the MVP of the NBA."


Harden, who doesn't want family, friends and teammates talking about the MVP, said earlier this week that he didn't care if he won the award or the scoring title because his concentration is helping the Rockets make a deep playoff run.


He entered Friday night averaging 27.6 points, 6.9 assists and 5.9 rebounds per game this season. Harden leads the NBA with 10 40-point games and 34 30-point games, and he's tied with two 50-point games -- including a 51-point outburst against Sacramento on April 1.


"My name being mentioned in the conversation is a blessing and it's an honor," said Harden, who was held relatively in check by the Spurs, shooting 5-of-19 from the field en route to 16 points. "If I had to choose one, then that's who I would choose. But I'm not worried about it. I'm focused on winning and doing the right thing to get my team ready for the playoffs."


Curry scored 45 points in Golden State's victory over Portland on Thursday, prompting Warriors coach Steve Kerr to stump for his player to win the award.


"There's nothing left to say," Kerr said. "Except that he's the MVP."


Count the Clippers'Blake Griffin, however, as one who believes that Harden should win.


"Not taking anything away from Steph [Curry], I just think James has done so much with less," Griffin said Friday. "He's had a lot of guys injured, and they're sitting at No. 2. You can't go wrong with either one. If Steph gets it, he deserves it. I think James deserves it, too."


Clippers guard Jamal Crawford said he wouldn't mind seeing some history made with the MVP award this season, which is the closest race he can ever remember seeing.


"It's unbelievable. It really is. I don't know which way I would vote," Crawford said. "There's never been a co-MVP before, but if there was ever a first time, it would be this time."


Arash Markazi of ESPN.com contributed to this report.