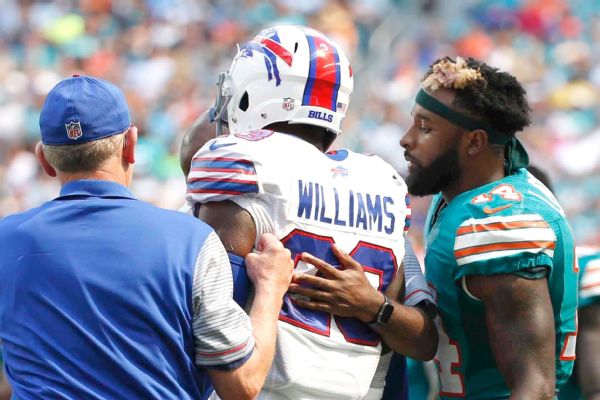 MIAMI GARDENS, Fla. -- Jarvis Landry apologized for his block that injured Aaron Williamson Sunday. Landry said he wished he could take it back and offered little defense when asked if the hit was dirty.

"Call it what you want," Landry said. "It's football."

The NFL is certain to look at the play closely. Officials flagged the Miami Dolphins receiver Sunday for unnecessary roughness, and some of Williams' Buffalo Bills teammates thought the block was worse than that.

Williams missed the second half with a head and neck injury, and he went to a hospital for an MRI before flying back to Buffalo with the team. The veteran safety missed most of last season because of a neck injury that required surgery and threatened his career.

On Sunday, he was reinjured on a running play in which Landry led with his left shoulder, launched into Williams and hit him head high. Williams was flattened and then squirmed in pain. He remained on his back before he slowly rose and was led to the locker room.

As Williams woozily walked off the field, Landry approached him.

"I apologized," Landry said. "I just told him to get better. You never want to see that happen to anybody. ... If I could take that hit back, I would. It's a guy's livelihood."

"I hope it wasn't cheap," Ryan said. "I know Landry. I have a ton of respect for that kid. I wouldn't think he'd do that. I hope that wasn't the case."

"I don't know if it was legal or not, but I know he is out there just trying to play physical," Alexander said. "I don't know him to be a dirty player, but you don't like to see those types of hits, especially losing that type of caliber of player for our defense. It definitely hurts us. The NFL will look at it and determine whether or not it was a legal hit."

Bills center Eric Wood said he felt like the hit warranted a fine.

"I didn't see it. I heard about it, and I thought 'that's garbage,'" he said, according to The Buffalo News. "Who knows if he knows he's had prior neck injuries, but we'll see if he gets fined more for that than the guys dancing."

Landry had an eventful day. He made five catches for 78 yards and caught a 2-point conversion pass during Miami's comeback for a 28-25 victory.

Before the hit on Williams, Landry was flagged for taunting. He said he drew that penalty because he spun the ball after a reception in front of the Bills' bench.

"I didn't know that was a penalty," he said.