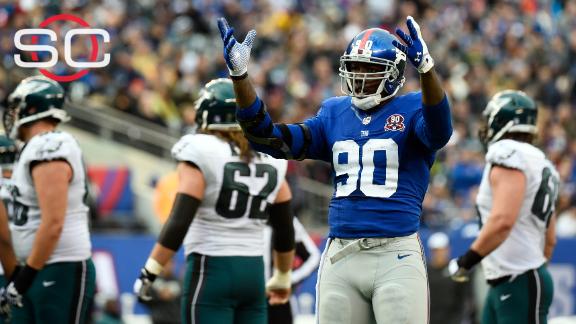 The New York Giants on Tuesday reached an agreement with Jason Pierre-Paul on a contract for the remainder of this season, bringing resolution to an ordeal that began when the defensive end severely damaged his hand in a July 4 fireworks accident.

Sources with knowledge of the situation said Pierre-Paul's deal is heavy on incentives tied to how much of the remainder of this season he is able to play. Because he has not practiced with the team since last season (he skipped the offseason program to protest the team's not signing him to a long-term contract), the Giants aren't yet ready to put him on the field. They have a two-game roster exemption for him, and they hope he can get into shape to play by Week 10 or Week 12. The Giants have a bye in Week 11.

"I'm very excited to be back," Pierre-Paul said in a statement released by the team. "I'm getting ready to do what I have to do. I've been training down in South Florida with my trainer. Every day, I got up at 7:30 and lifted weights. I've been doing what I have to do to stay in football shape."

Pierre-Paul addressed his signing on Instagram with a photo that appeared to show him inking the deal:

The Giants designated Pierre-Paul their franchise player in March, which meant he would have had to play on a one-year, $14.813 million deal or not play at all. Before he signed that tender, Pierre-Paul lost his right index finger and suffered burns and other damage to other parts of his hand due to the fireworks accident.

Because of the injuries and questions about how much conditioning he has been able to do, the Giants have concerns about whether Pierre-Paul can be the player he was. As such, they weren't interested in bringing him back at the franchise price, even though that would have been prorated and they wouldn't have had to pay him for games missed.

A Sept. 7 medical exam left the Giants skeptical about Pierre-Paul's chances of playing this year, but he returned Monday for a follow-up exam that proved more encouraging. Following that, the Giants entered into negotiations with Pierre-Paul's representatives and the sides reached an agreement late Tuesday.

"We all are excited to see Jason," general manager Jerry Reese said in the team's statement. "He has worked very hard to get himself back into position to join the team and work toward getting on the playing field on Sundays."

Finally under contract for the first time this year, Pierre-Paul will be able to rehab, work out and practice at the Giants' team facility starting Wednesday. It is unclear how much he'll be able to practice at first, but this was the step needed before he could play again.

"It is just good to have Jason back in our building," coach Tom Coughlin said in the team's statement. "You can feel his energy and his desire to overcome what he has had to endure since July. His spirit is undeniable, and he is anxious to get to work with [defensive line coach] Robert Nunn and Spags [defensive coordinator Steve Spagnuolo], as well as our medical and strength and conditioning people."

Pierre-Paul was the Giants' 2010 first-round draft pick. He had 16.5 sacks in the 2011 season that culminated in the team's victory in Super Bowl XLVI. He struggled with injuries and inconsistency in the three years that followed, and even though he finished 2014 with 12.5 sacks, the Giants wanted to see more before committing to him long term, so they designated him the franchise player.

The Giants hold the right to franchise Pierre-Paul again next year, but they could also sign him to a long-term deal or let him leave as an unrestricted free agent after this season. That decision will be based on how he plays -- assuming he is able to play -- in the final few games of this season.

"I'm just here to help the team out," Pierre-Paul said. "I'm blessed to play the game, and I'm excited about the opportunity to play again."