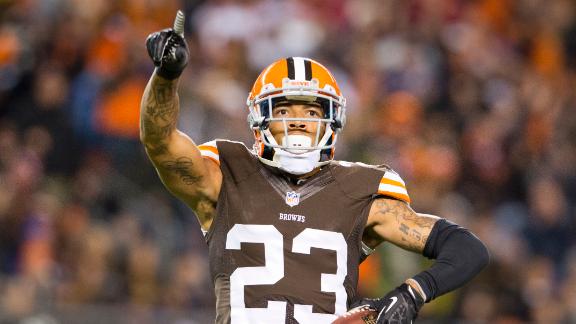 A total of $45 million is guaranteed. Of that total, $23 million is fully guaranteed, a league source told ESPN NFL Insider Adam Schefter.

Haden tweeted out the terms of the deal, including a photo of him signing his extension.

Proud 2 announce that i signed a 5year extension with the browns! 68M with 45 guaranteed! #trulyBleesed!! #GoBrowns pic.twitter.com/v1nem15Y2Q

Although Haden received more guaranteed money than Sherman, his contract is for a year longer, meaning Sherman's agreement is still bigger when it comes to guaranteed new money.

- Richard Sherman (@RSherman_25) May 13, 2014Another corner who may be in line to receive big money is Arizona's Patrick Peterson, who said Monday he believes he's worth more than what Sherman received. Peterson and the Cardinals are in the early stages of negotiating an extension to the All-Pro's rookie contract.

"This is a great day for both Joe Haden and the Cleveland Browns,"  general manager Ray Farmer said. "Joe's a good, young player who's made a commitment to our organization, and he's somebody with whom we want to move forward in order to advance our football team.

"He's a great person. He's the right guy to both build with and build around as we attempt to become an elite football team. He's a true professional. When we talk about identifying talent, building through the draft, developing solid players and retaining them, Joe Haden's at the top of the list. I'm excited. Our team is excited."

Haden, selected with the seventh overall pick out of Florida in 2010, is coming off his first Pro Bowl appearance.  The 5-foot-11, 195-pounder has appeared in 57 games, registering 13 interceptions, 68 passes defensed, three forced fumbles and two sacks.

First-year Browns coach Mike Pettine said getting a Haden deal done was a big move for the franchise.

"It's important for us," Pettine said. "To extend our core players and continue to grow with guys that represent everything we want this team to be: tough, hard-working and passionate. Joe obviously loves his teammates, and he loves this city. I know he wants to keep growing and improving as a player.

"That's what we need, and that's what we want. These are the types of players we want to build around, that will help us grow and win consistently."