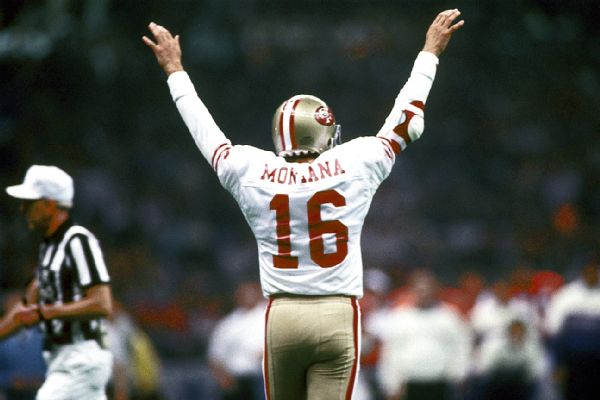 Joe Montana had one request as he received a ceremonial sign for a street that will be named after him where Candlestick Park once stood.

That the street also honor the wide receiver who caught the 49ers legend's most famous pass.

"I would like to share this," Montana said at the two-hour event at San Francisco's City Hall. "I would ask that you change this to Montana-Clark Drive."

The iconic image of Dwight Clark reaching up to catch Montana's throw -- a play known in NFL lore as The Catch -- in the waning moments of the 1982 NFC Championship Game was one of several memorable sports moments at the 49ers' former stadium.

The site where Candlestick Park once stood is being converted into a mixed-use development project complete with streets named after some of the greats who played there, which was also the home of MLB'sSan Francisco Giants.

"We're all in this together, and we'll find ways to win," Montana said of the team's old mantra. "...On and off the field, everybody tried to help everybody else in any way they possibly could."

An image of The Catch will be featured in a public mural at the development project.

Clark, who revealed in March that he has been diagnosed with the condition known as Lou Gehrig's disease, recalled how Montana would sail the ball or throw it at Clark's feet whenever they practiced the route.

The ball's placement on the actual play was perfect, prompting Montana to lobby to call it The Throw.

Said Clark to his friend in mock protest: "Give me my one play!"

Among the other former 49ers who will have streets named for them: defensive back Ronnie Lott, longtime owner Edward J. DeBartolo, receiver Jerry Rice and coach Bill Walsh, who died in 2007. His sign, Bill Walsh Street, was presented to his widow, Geri.

Former Giants players -- Willie Mays, Juan Marichal, Orlando Cepeda and Barry Bonds -- also will have streets in their honor. Willie McCovey will have a park named after him. McCovey's 231 home runs at Candlestick Park were the most by any batter in a stadium infamous for its blustery wind.

"I enjoyed Candlestick. I was one of the few players who enjoyed playing there," McCovey said.

"I always figured if I got something named after me, it would be Carmen Policy Alley, where you put your garbage," Policy jokingly said. "To have it actually say Avenue -- it's pretty special."