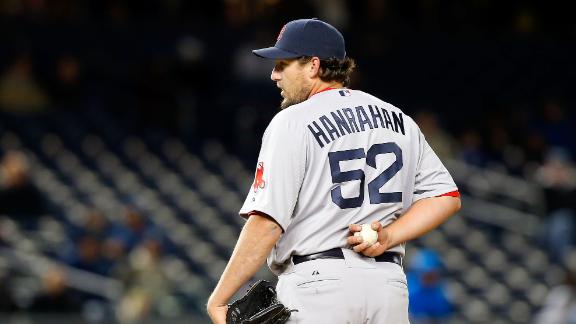 ESPN
By Jerry Crasnick
The Detroit Tigers made another move to upgrade their bullpen, agreeing on a one-year contract with free-agent reliever Joel Hanrahan, general manager Dave Dombrowski announced Friday.

Hanrahan, 32, is 22-18 with a 3.85 ERA and 100 saves in seven big league seasons with Washington, Pittsburgh and Boston. The right-hander saved a total of 76 games for the Pirates in 2011 and 2012 and made back-to-back National League All-Star teams.

He underwent Tommy John surgery on his right elbow in May 2013 and missed most of the season with the Red Sox. He recently held a showcase in Florida for teams, and the Yankees, Mets, Rangers, Red Sox and Rockies were among those to express interest.

The Tigers placed Hanrahan on the 15-day disabled list and will make a corresponding move later Friday to open a spot on the 40-man roster. Hanrahan will receive a base salary of $1 million with a chance to earn an additional $2 million in incentives, a source confirmed.

Dombrowski said Hanrahan will begin a rehab assignment at Detroit's extended spring program in Lakeland, Florida, and could throw to hitters as soon as next week. He declined to pinpoint when Hanrahan might pitch for Detroit.

"We're willing to take our time in this situation because we realize we need to be careful with him coming back from Tommy John surgery,'' Dombrowski said. "He's still in spring training mode. But we think this situation is well worth the gamble for us. We think he'll help stabilize the back end of the bullpen when he's ready.''

Although agent Larry Reynolds estimated that Hanrahan could be back in the majors in five to eight weeks, he added that "it's up to Joel and the medical folks."

Hanrahan, speaking on a conference call, said he received a strong recruiting pitch to sign with Detroit from his good friend and Tigers outfielder, Torii Hunter. While he's encouraged by his progress in his comeback from elbow surgery, he also declined to speculate on when he'll be ready to join the Tigers.

"I don't want to put a time frame on it and I don't think Dave does,'' Hanrahan said. "I don't think anybody is saying, 'You've got to be back on June 1.' I haven't faced a hitter yet. I haven't bounced back from throwing in a game, so it's a situation that will come day by day.

The Tigers signed six-time All-Star Joe Nathan and former Yankees reliever Joba Chamberlain during the offseason in an effort to improve the bullpen, but the relief corps has been a major problem for first-year manager Brad Ausmus in the early going.