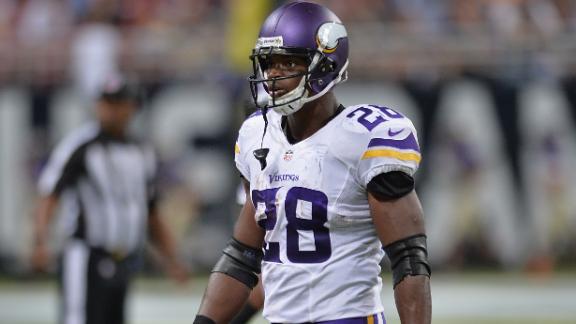 Dotyissued his order Thursday, less than three weeks after hearing oral arguments. The ruling sends the case back for further proceedings consistent with the rules of the collective bargaining agreement.

The league had suspended Peterson through at least April 15 under its personal conduct policy for his role in a child abuse scandal that shook the league. Doty said in his 16-page ruling that Henderson "simply disregarded the law of the shop and in doing so failed to meet his duty" under the CBA.

NFL spokesman Brian McCarthy said in a statement that the league disagrees with Doty's decision and will appeal.

"We believe strongly that Judge Doty's order is incorrect and fundamentally at odds with well-established legal precedent governing the district court's role in reviewing arbitration decisions," McCarthy said. "As a result, we have filed a notice of appeal to have the ruling reviewed by the Eighth Circuit Court of Appeals."

McCarthy said that Peterson would be placed back on commissioner Roger Goodell's exempt list rather than being immediately reinstated, "pending further proceedings by appeals officer Harold Henderson or a determination by the Eighth Circuit Court."

McCarthy added,"The commissioner's exempt list permits a player and team to communicate."McCarthy also said players on the exempt list can be traded, released or have contracts restructured after the start of the league year on March 10.

The Vikings released a statement saying they would welcome Peterson back to the team once his situation is resolved.

"Adrian Peterson is an important member of the Minnesota Vikings, and our focus remains on welcoming him back when he is able to rejoin our organization," the statement read. "Today's ruling leaves Adrian's status under the control of the NFL, the NFLPA and the legal system, and we will have no further comment at this time."

NFL Players Association executive director DeMaurice Smith said in a statement that Doty's decision was a "victory for the rule of law, due process and fairness."

The crux of the issue was the application of the enhanced personal conduct policy, increasing a suspension for players involved with domestic violence from two games to six games. Because that was implemented after the injuries occurred to Peterson's son, delivered by a wooden switch that Peterson was using for discipline, the union contended that the prior standard of punishment should apply.

"Our collective bargaining agreement has rules for implementation of the personal conduct policy and when those rules are violated, our union always stands up to protect our players' rights," Smith said. "This is yet another example why neutral arbitration is good for our players, good for the owners and good for our game."

Doty's courtroom has long been a ground zero of sorts for NFL labor matters, and his ruling pattern has favored the union more often than not.

The increased penalty for domestic violence arose from the furor over the league's handling of former Baltimore Ravens running back Ray Rice, who was seen on surveillance video knocking out the woman who's now his wife with a punch in an elevator.

Rice was initially suspended for two games before Goodell declared the ban indefinite. The arbitrator who heard Rice's appeal, former U.S. District Judge Barbara Jones, ruled that Goodell's decision was "arbitrary" and an "abuse of discretion."

Despite the NFL's argument that the ruling by Jones was irrelevant to Henderson's, Doty disagreed.

"The court finds no valid basis to distinguish this case from the Rice matter," Doty said.

Now there's the matter of Peterson's future with the Vikings.

He is under contract through 2017, carrying a $15 million salary cap hit for 2015, and several high-ranking Vikings officials have said definitively they want him to return. General manager Rick Spielman said last week he expects Peterson to be back. But Peterson has expressed some uneasiness, telling ESPN in a recent interview he felt betrayed by the organization during the process of Goodell placing him on paid leave while the child abuse case played out in court in Texas.

There also was uncertainty as to Peterson's future with the Vikings after his agent, Ben Dogra, had to be separated from Vikings vice president Rob Brzezinskiduring a heated exchange at the NFL scouting combine last week, sources told ESPN.

The running back is scheduled to earn a base salary of $12.75 million in 2015 and count $15.4 million against the Vikings' salary cap.

Peterson would again be the league's highest-paid running back if he returned under his current contract, and in a December interview with ESPN, he said he didn't believe he should take a pay cut in 2015. He added that he saw himself being a better player in 2015 after getting tackled just 21 times in 2014.

The market opens with the new league year March 10, at which time the Vikings could trade Peterson if they so decide. If they cut him, they'd owe him no more money and take only a $2.4 million hit to their salary cap.

Ben Goessling of ESPN.com and The Associated Press contributed to this report.

Judge Rules In Favor Of Peterson, NFL To Appeal
Adam Schefter discusses a federal judge's ruling for Adrian Peterson, and what comes next with the NFL's decision to appeal.

Judge Rules Against NFL In Peterson's Appeal
ESPN Vikings reporter Ben Goessling discusses the news that a federal judge has ruled against the NFL in Adrian Peterson's appeal, and the appeal of his suspension now goes back to the arbitration process for a decision.

Can Relationship Between Vikings, Peterson Be Saved?
Louis Riddick and Herm Edwards discuss how they would mend the relationship between the Vikings and Adrian Peterson.