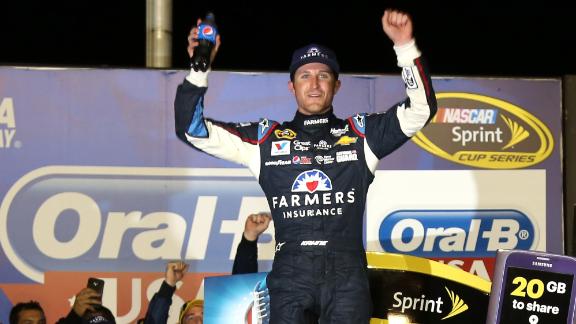 HAMPTON, Ga. -- Kasey Kahne's "downer" year received an important boost when he overcame his struggles with restarts with a big power move when he needed it the most.

Kahne charged past Matt Kenseth and Denny Hamlin in a two-lap shootout to win the NASCAR Sprint Cup race at Atlanta Motor Speedway on Sunday night.

Kahne's first win of the season earned him a spot in the Chase for the Sprint Cup.

"I struggle with restarts a lot and that's big," Kahne said. "That's one of the things you have to be good at. It worked really well tonight."

Meanwhile, Tony Stewart's much-anticipated return to racing ended a little more than halfway through the race.

Stewart hit the wall for the second time after his right front tire blew out on Lap 172, ending his night with a 41st-place finish.

Kahne took his third career win in Atlanta and his first win of the season.

"We've had kind of a downer year at times," Kahne said.

Kenseth, who finished second, also qualified for the Chase on points. He began the second restart in first place, but couldn't stop the charge from Kahne.

"I was able to get alongside him and get a good run down the back stretch," Kenseth said. "... I got back to the gas as soon as I could. I just didn't have enough muscle to clear him."

It was Stewart's first race since the sprint car he was driving struck and killed 20-year-old Kevin Ward Jr. in an Aug. 9 race at a dirt track in upstate New York. The fatal wreck is still under investigation.

With only two laps remaining and Kahne holding a solid lead over Kevin Harvick, Martin Truex Jr. and Kyle Busch collided, forcing a caution flag and the first shootout. Harvick, who led 195 laps, had contact with Joey Logano in heavy traffic and hit the wall on the restart, bringing another caution flag and a second shootout.

Kahne, who had four fresh tires, started behind Kenseth and Hamlin on the final restart.

"I felt better about the first restart because the outside lane was really slick and I hardly spun the tires," Kenseth said. "I felt really good about that. The second one I didn't feel nearly as good about. (Kahne) was behind me. They had so much speed. They drove right up between me and Denny."

Harvick, who also won the Nationwide Series race on Saturday night, started from the pole and led the first 80 laps, but was denied his attempt for a weekend sweep.

Stewart's problems started when he went into the wall earlier in the race following a collision with Kyle Busch.

Kenseth began the night fifth in the points race, but was not yet locked into the Chase because he had no wins. Kenseth needed to finish seventh or better to secure his place in the playoffs.

After leading the final 159 laps of his dominant Nationwide series win on Saturday night, Harvick resumed his mastery of the Atlanta Motor Speedway track. Starting from his series-leading sixth pole of the season, Harvick led the first 80 laps, giving him a combined 239 consecutive laps led at the track over two races.

Hamlin passed Harvick for the lead after Jeff Gordon, who had been second, blew a tire and slid into the wall on turn 3 on the 78th lap, forcing a yellow flag.

Stewart started 12th and opened strong, moving up to sixth in the first five laps. Driving high on the track, three-wide at times, he made two more passes to move to fourth a few laps later. He fell back to 12th before his first big setback. Busch, attempting to move to the top of the track, cut in front of Stewart, forcing Stewart into the wall.

After two visits to pit row for repairs, Stewart didn't last long. Only 50 laps later, he hit the wall on turn 2 after his right front tire blew. This time he drove his more heavily damaged car to the garage, and his race was over.

Brad Keselowski was fourth when a collision with Josh Wise ended his night with 28 laps remaining. 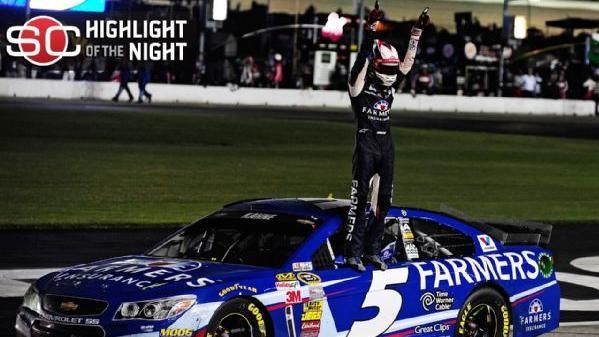 Kasey Kahne Wins At Atlanta
SportsCenter Highlight of the Night: Kasey Kahne picked up his first victory of the season with a win in Atlanta.