KD disputes idea Warriors are better without him 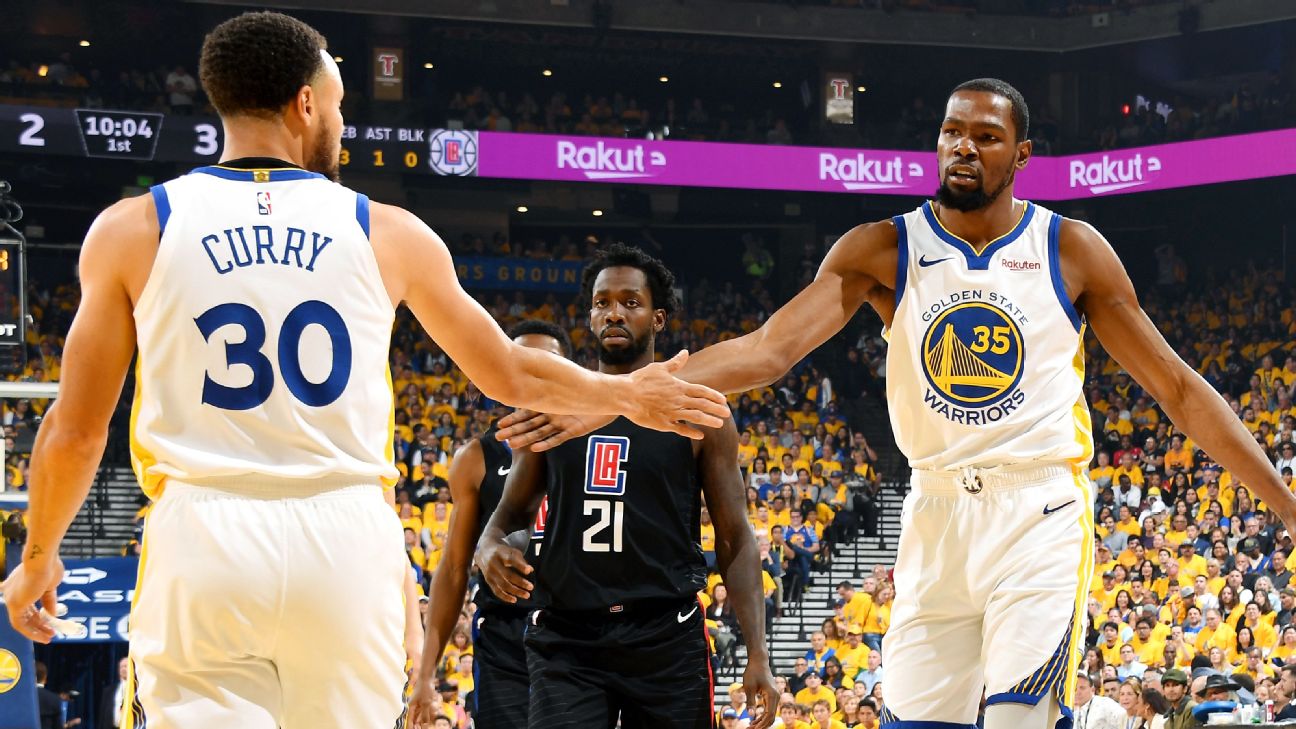 OAKLAND, Calif. --Golden State Warriors superstar Kevin Durant said he is "doing better every day" but acknowledged that he isn't sure when he'll be able to return as he continues to recover from a strained right calf.

Speaking to reporters for the first time since he suffered the injury on May 8, Durant also addressed the idea that the team plays better without him -- "that's not facts" -- and the way some still don't see him as part of the Warriors' collective group.

"It's been that way since I got here," said Durant, who seemed engaged and optimistic about his return to the court at some point in the near future. "It's been that way since I got here -- 'It's the Warriors and KD.' I understand that, and I felt like my teammates and the organization know exactly what I've done here off and on the court to become a part of this culture, stamp my flag in this culture and this organization. ... I know what I bring to the team, but I also know a lot of people on the outside don't like to see us together, and I get it."

Notably, Durant corrected a reporter when asked how "their" play has been, in regard to how his teammates have picked up the slack in his absence -- responding with, "Our play?"

Durant said he has noticed the storylines about both media and fans wondering whether the Warriors are better without him, despite teammates and coaches repeatedly saying how much they want him back.

"It's hard to get away from that because I watch the game, and you watch the lead-up to the games, and that's all everybody is talking about," Durant said. "My perspective is just, like, I want to focus on rehab, but I also want to be a fan of my teammates. I want to enjoy my teammates from a different view. A lot of those guys sit in a chair and cheer for the rest of the guys, the starting guys, and now I get an opportunity to do the same thing. I turn on the TV, and since I can't travel with the team, all I hear is the noise.

"As a player, I think about that -- I'm just like, that's not true. That's not facts when it comes from a basketball perspective. The competitive side of me -- I also like to talk basketball as well -- so if you're going to say something like that, I'm going to engage in it. So it's all fun, it's all cool, but I know the real."

"I feel like for the last three years, everybody has taken their shots and trying to nitpick or break us down or drive a wedge in our team chemistry or our togetherness -- whatever the case is," Curry said. "And even this year, it's even been amplified even more with [Durant's] free-agency stuff. And nobody can say anything without it getting scrutinized or criticized, or nobody can be happy when people are playing well. That's the part, to me, that's the most surprising. If it's KD playing well, it's, 'Oh, they're playing a different style, and it's not as fun to watch,' or when he's out, and we're winning games, it's, 'Oh, are we better, more fun?' Whatever the question is, we hear it all the time."

The Warriors said Thursday that it is "unlikely" that Durant will be ready for Game 1 of the Finals on May 30 against either the Milwaukee Bucks or the Toronto Raptors. The Warriors remain vague on a target date for his return because Durant has yet to be cleared for on-court work, and nobody is certain how he'll respond once he clears the next hurdle in the rehab process.

Even so, Durant said he feels he is making progress on an injury that he admits is "worse" than those he has had in the past.

"I'm just taking it a second at a time," Durant said. "Every rep we do in the weight room, I just try to focus on that rep and not try to think too far down the line. 'Cause I don't really know too much about this injury. I'm leaving it the hands of the team doctors. I trust the direction they're trying to put me in." 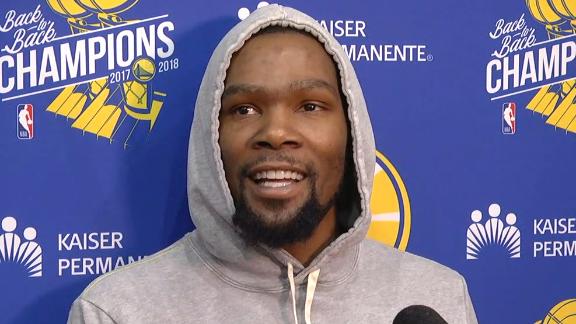 Durant responds to critics who say Warriors don't need him
Kevin Durant opens up about how he feels about talks of the Warriors not needing him to win a championship. 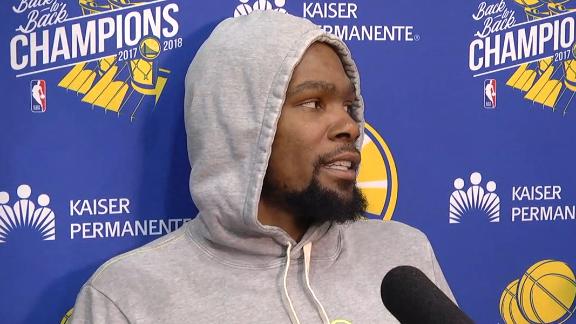 Durant corrects a questioning reporter
When Kevin Durant is asked to comment about his Warriors teammates' play with him sidelined, he corrects the reporter's use of "their," implying that he is still part of the team even though he is not playing.
Report a correction or typo
Related topics:
sportsespngolden state warriorskevin durantnba
Copyright © 2022 ESPN Internet Ventures. All rights reserved.
TOP STORIES
Ticket restriction removed for Bay Area fans to attend 49ers-Rams game
Woman killed in 'targeted ambush' at her birthday party in SoCal
Health experts believe Bay Area has already reached omicron peak
EXCLUSIVE: Woman shoved to ground in Oakland's Chinatown speaks out
No COVID safety deal reached between OUSD, teacher's union
Funeral held for Alameda Co. sheriff's recruit killed on I-580
After the omicron wave, what's next for the COVID pandemic?
Show More
COVID-19 updates: Conditions 'ideal' for more variants WHO warns
Amy Schneider details historic 'Jeopardy' run on 'GMA': VIDEO
4 wounded in shooting in Germany; gunman dead
North Bay anti-vaccine activists protest mandates
Justices to hear challenge to race in college admissions
More TOP STORIES News