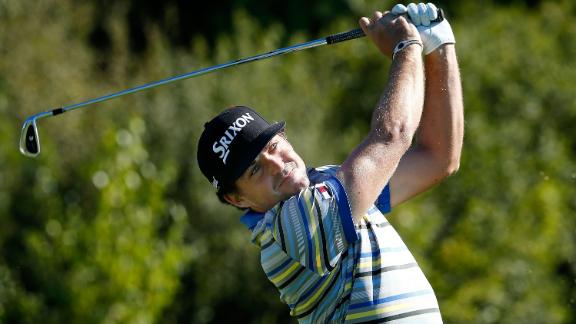 NORTON, Mass. -- In the final tournament before Ryder Cup teams are set, Keegan Bradley did his best Friday to make an impression in the Deutsche Bank Championship.

So did Webb Simpson.

Bradley played bogey-free in a gentle breeze at the TPC Boston for a 6-under 65, giving him the lead among early starters in the second FedEx Cup playoff event. Simpson, who also would need to be a captain's pick, and Jason Day of Australia were one shot behind.

This is one week during the playoffs that $10 million doesn't seem nearly as important as a chance to play for free.

U.S. captain Tom Watson and European captain Paul McGinley announce their three wild-card selections Tuesday. Bradley made his debut in 2012 and is desperate to get back on another team.

Over the years, several players needing a pick have said they're only thinking about good golf, not whether they will be selected. Bradley isn't like that.

This isn't just about the Americans.

European qualifying ends this week in Italy, and the players most likely to be picked are in Boston. That includes Ian Poulter, though he likely is a lock to be a pick considering the damage he has inflicted on Americans in recent Ryder Cups. Poulter shot a 67. Luke Donald showed some form with a 69.

"They obviously are saying it for a reason," Poulter said. "When you've delivered for a team like that and you've done it often, they want you there for a reason."

Poulter is having such a mediocre season that he could get eliminated from the FedEx Cup playoff if the Englishman doesn't move from No. 91 into the top 70 who advance to the third playoff event next week in Denver.

"I just want to play golf," Poulter said. "It's been a (bad) year, and I want to turn it around right now."

Donald cannot qualify for the team, though he is hopeful of a pick.

"I keep asking myself one question that Paul should ask," Donald said. "Who would you rather have on Sunday trying to win a point? Obviously, I have a lot of experience and I hope that's going to count for a lot. It's also wise to pick on form, and my form hasn't been the best."

The Ryder Cup has been a strong focus during the early stages of the FedEx Cup team. Hunter Mahan got into the picture in a big way last week by winning The Barclays. He didn't fare so well on Friday, opening with a 73.

For others, it's all about the FedEx Cup for now because they're on the team.

British Open and PGA champion Rory McIlroy, coming off a week in which he was never seriously in contention and tied for 22nd at The Barclays, birdied three of his opening four holes and was on the cusp of leading until dropping too many shots. He had a 70.

Jordan Spieth started his day with a double bogey and then had to make a 10-foot par putt on his second hole. He settled down after that, added four birdies and an eagle and was at 67.

Phil Mickelson debated not coming to Boston because of playing so much in such a short stretch away from home. He looked like he was lost with two bogeys, a double bogey and a triple bogey -- along with two birdies -- in his opening seven holes. Mickelson was close to the bottom of the leaderboard as he finished his round.

Bradley was never in big trouble. He drove it long and straight, and that goes a long way on the TPC Boston. Bradley played with Mickelson in three matches at Medinah in the last Ryder Cup, and they never lost. Bradley also played a practice round at Gleneagles with Watson before the British Open.

"I think if I go out and shoot good scores, yeah, I think I'm in good shape," Bradley said. "But there's so many great players that aren't on this team. I don't take anything for granted. I don't think I'm a lock by any means."