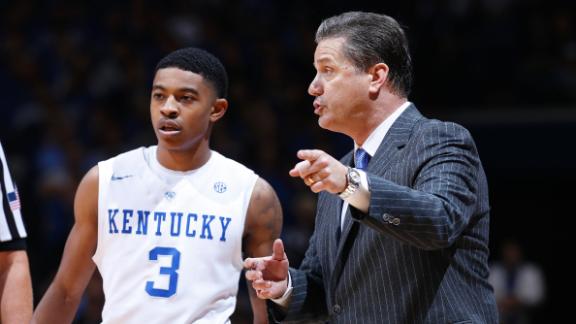 The entire starting five for Kentucky is expected to declare for the NBA draft. But in Las Vegas, Kentucky remains one of the teams to beat in 2016.

On Tuesday, the William Hill sportsbook opened the Wildcats as 8-1 favorites to win next year's NCAA tournament. North Carolina is second at 9-1, followed by Virginia at 10-1.


The Westgate SuperBook made Kentucky, North Carolina and Virginia all 10-1 co-favorites, followed by Maryland and Villanova at 12-1.


Kentucky coach John Calipari said Monday he expects five to seven of his players to declare for the NBA draft, including each of the five starters in the Wildcats' semifinal loss to Wisconsin: Willie Cauley-Stein, Karl-Anthony Towns, Trey Lyles, and Aaron and Andrew Harrison. Key reserves Dakari Johnson and Devin Booker also could make the leap.


Kentucky and North Carolina are the only teams with single-digit odds at William Hill. The Tar Heels had only four seniors on this year's roster, none of whom played in the Sweet 16 loss to Wisconsin. Star guard Marcus Paige and forward Brice Johnson are considered the team's most NBA-ready prospects, but both are expected to return.


Duke, after winning its fifth national championship, likely will lose freshman stars Jahlil Okafor and Justise Winslow to the NBA, along with senior guard Quinn Cook.


The 2016 Final Four will be held at NRG Stadium in Houston.