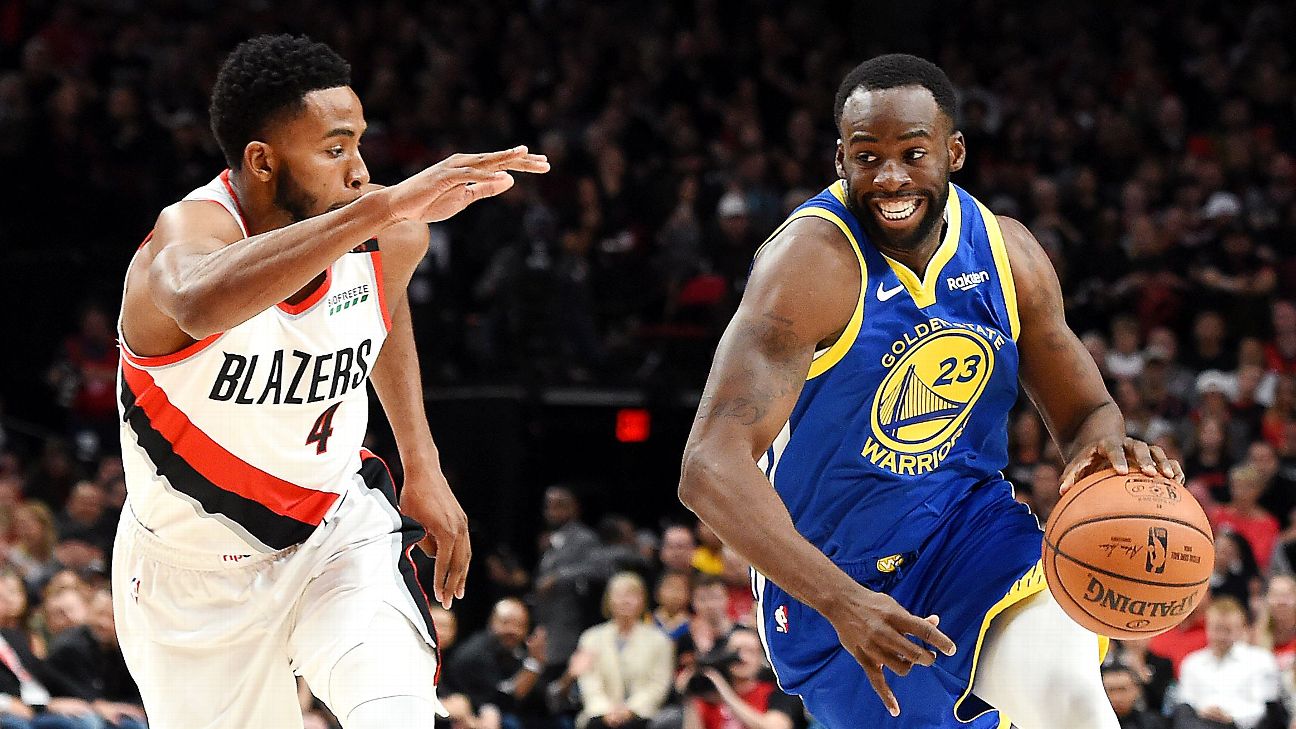 PORTLAND, Ore. -- Golden State Warriors power forward Draymond Green racked up his seventh career postseason triple-double during a 110-99 Game 3 win over the Portland Trail Blazers in the Western Conference finals on Saturday night. Green scored 20 points, grabbed 13 rebounds, dished out 12 assists, made four steals and blocked a shot in one of the most complete all-around games of his career.

"I don't even know what to say about Draymond," Warriors coach Steve Kerr said. "He was like a wrecking ball out there. He was just destroying everything in his path. The pace that he was generating was incredible, and it just seemed like he never got tired. ... It's one of the best games I've ever seen Draymond play."

Green set the tone for a Warriors team that fell into an 18-point hole in the first half and was down 14 with 8:08 left in the third quarter. His ability to push the tempo and get the rest of his teammates to feed off his energy propelled the Warriors to a victory that leaves them just one win shy of earning their fifth straight NBA Finals appearance, something that hasn't been done since the 1960s Boston Celtics.

"I mean, his stat line's ridiculous," Warriors swingman Klay Thompson said. "Four steals, doing it on both ends, plus-16. But it's nothing new. I've seen him do it for seven years. ... He makes us go, especially when we push that pace. I'm proud of Dray, and he's not satisfied."

Green, who has long been considered the emotional engine of the Warriors during their dynastic run over the past five years, made an interesting acknowledgement on Saturday night regarding just how important it has been for him to keep that emotional fire in check over the past few weeks.

"My teammates always tell me, 'We follow your body language,'" Green said.

After picking up four technical fouls early in the postseason, Green said he was able to refocus on avoiding confrontations with officials. Seven technical fouls in the postseason earn an automatic one-game suspension, something Green knows he can't afford, especially as the Warriors try to continue winning without injured stars Kevin Durant (calf) and DeMarcus Cousins (quad).

"I think it definitely helps the energy of the guys," Green said of keeping his negative interactions with the officials in check. "I still like to pick and choose my spots. Sometimes I may take a tech, but that's more mindful than just getting a tech. Sometimes I know like, 'All right, I need an energy burst, maybe I'll take one.'

"But sometimes I'm not mindful and I'll get a tech, and that will just kill the energy of our team. I've been really focused and locked in on that, and I realized I got to a point where I was doing more crying than playing. I'm sure it was disgusting to watch because I felt disgusting playing that way, and I just wanted to lock back in on the game."

Green credited his mom, Mary Babers-Green, and his fiancée, Hazel Renee, with being able to help him direct his energy elsewhere on the floor instead of getting in combative arguments with the officials.

"I understand that officials aren't perfect, and I still have conversations with them now when they miss a call, but it's completely different conversations," he said. "You know, my mom has been really big [in helping me]. My fiancée has been really big [with] just talking to me about that and just telling me to stay locked in on the game. I also have some little ones at the house that's enjoying watching me play. I don't necessarily want them to see that. So just try to be more mindful of it."

It's a change Kerr has been happy to see.

"He's playing with force," Kerr said. "He's playing with discipline, he's playing under control. He's not letting anything bother him -- officiating, bad shots, turnovers -- he's just moving on to the next play. So from that standpoint, it's as good as he's ever been."

Green's impact on every aspect of the game has been felt by every player on the floor. Saturday's first half marked the fourth time this postseason that Green had at least 10 points, 5 rebounds and 5 assists in a single half, the most by any player, according to ESPN Stats & Information research.

"Watching him on defense, I mean, it's incredible," Blazers big man Meyers Leonard said. "His reads, his communication, his weakside defense, blocking shots, steals -- it's pretty impressive. Not only that, but he's a playmaker on the other end, as well. He knows who to get the ball and when to get them the ball. ... He's a winner. I mean, point blank, he gets it done. He brings it every single night."

Now Green and the Warriors hope they can keep their momentum going and close out the Blazers on Monday night. To do so, Warriors star Stephen Curry and the rest of his teammates are banking on Green continuing to play at a high level.

"It's like he's got eight eyeballs," Curry said. "He sees everything and kind of knows what to say at the right time. ... He's just observant of everything and has just a high basketball IQ. That's just, obviously, his experience, but the fact that he's so versatile that he can do a lot of different stuff and knows how to help a team win." 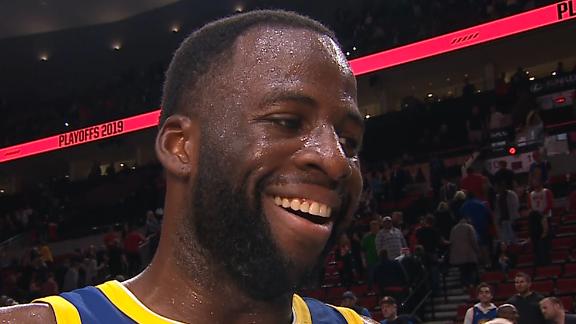