Kevin Durant progressing in rehab, but no timetable for return

ESPN
By Chris Haynes
OAKLAND, Calif. --Golden State Warriors forward Kevin Durant doesn't know when he might return to the court, but he sounded like a player confident that he'll be back sooner than expected.

On Wednesday, Durant addressed the media for the first time since suffering a grade 2 MCL sprain in his left knee in last week's road loss to the Washington Wizards.

He spoke optimistically during his 10-minute news conference.

"I feel better," he said. "It's only been a week, so I'm just trying to take my time. Take it one day at a time and just get better. That's the name of the game for me right now. Just keep grinding every single day and keep gaining strength in the rest of my body and hopefully my knee heals pretty quick."

Durant walked toward the podium with a black knee brace on and with the assistance of crutches. Before he spoke to members of the media, he was seen in the locker room prior to Wednesday night's game against the Boston Celtics walking without crutches, but with a noticeable limp.

"It could be a lot worse, man," Durant said. "A lot of things could have happened. It could be a lot worse. I hurt my knee and a lot of guys go through this throughout the season. A lot of injuries. It's nothing for anybody to be concerned about. I got a boo-boo paying basketball. It is what it is. So I'm OK. My spirits are good, my family is good, I'm doing what I love to do every single day, so it's all right ... it's a process I'm looking forward to getting through."

When teammate Zaza Pachulia inadvertently plowed his head into Durant's knee, the one-time MVP said he didn't quite know the severity of what occurred upon impact.

"Guys fell on my leg before," he said. "Not as bad, but this time I knew it was a little different when I ran up and down the court. When I got to the back, it stiffened up real quick. So it was a pain I've never felt before. But I knew I've been through this before. No matter what is was, no matter what the doctor said, what the MRI, the scan said -- I knew I'd be ready for this journey to just get back. No matter what, I was going to conquer it and work extremely hard every single day to try to get back on the court."

Upon an initial examination of his knee in Washington D.C., sources told ESPN that the results came back as a fractured tibia. After further testing, a somber evening turned hopeful.

"It was a crucial 30 minutes where I thought that I'd have to go through this long rehab to get back on the court, and then I got a call that said it wasn't as bad, so that kind of eased my mind a little bit," he said. "But like I said, either way, I knew it was something I had to conquer, I knew I had to work extremely hard to get back. I still do no matter what; I've been through it before. It's the reason why I'm here now because I work extremely hard. It's nothing different. It's just trying to get my knee right, get my body right, and hopefully I'll be back to play soon."

Durant's daily routine consists of lifting weights, increasing his range of motion in his leg, and shooting shots from a wheelchair. Warriors coach Steve Kerr said he hopes Durant can play in a couple of regular-season games before the playoffs roll around.

"I'm not even trying to put a date on [my return]," Durant said. "It's just however I feel. I'm just setting goals every single day. Straightening my leg out -- that was a big goal of mine throughout this week and I was able to accomplish that and get some range of motion as I bent my leg. So that was key for me. So I'm just try to set these goals day by day. I'll get back to playing, I'll worry about that whenever I feel good. But I'm just taking it one day at a time."

With each passing day, it appears the Warriors are closer and closer to having their small forward back in the lineup before first-round playoff action.

"I'm getting better day by day," Durant said, "and I'll be out there as soon as I'm ready to play." 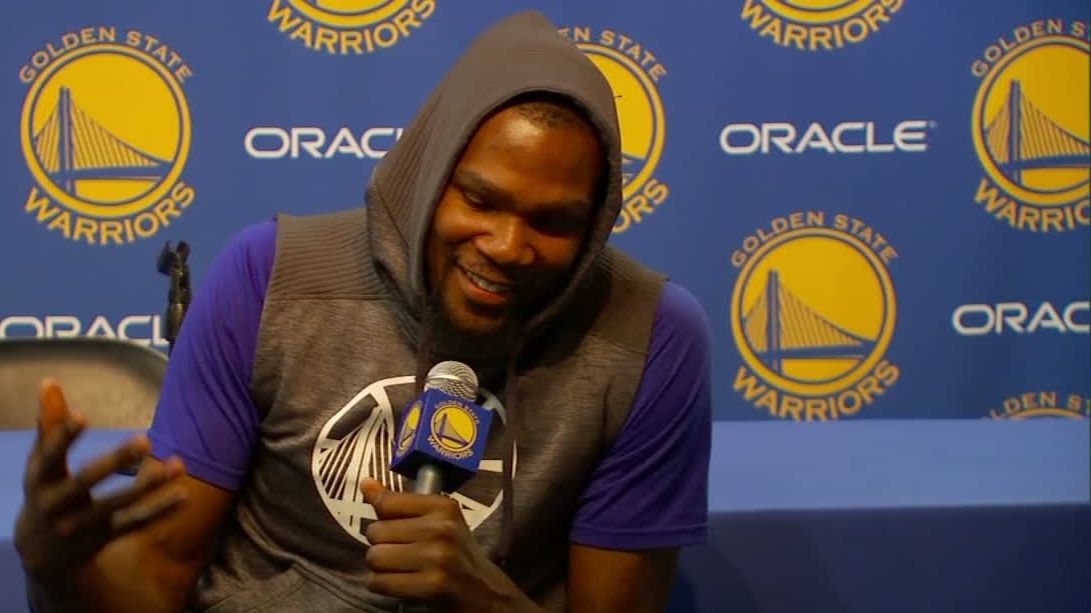