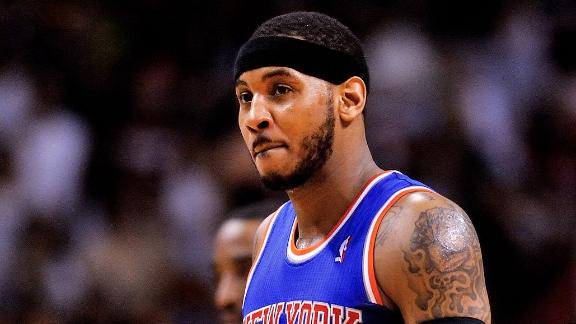 ESPN
By Chris Broussard and Ian Begley
The New York Knicks met with free agent Carmelo Anthony in Los Angeles on Thursday after he spent more than two hours with the Los Angeles Lakers earlier in the day, sources told ESPN.com.

The Knicks have always told Anthony that they would give him the max contract and reiterated that in their Thursday meeting, although the offer was verbal, not formal, a source said.

Anthony did not give the Knicks an answer or a timetable on his decision Thursday night, a source said. He will take the long weekend to think things through, the source said.

The Lakers' contingent was originally supposed to include star Kobe Bryant, but the guard was not present because the time of the meeting was moved and Bryant was not able to make it back to California from a European vacation in time, sources told ESPN.com's Ramona Shelburne.

Anthony left the Lakers' practice facility after a 2 1/2-hour meeting to hear their pitch as to why he is the right man to become the next face of the franchise but declined to comment on the meeting.

Bryant intended to meet with Anthony after the star forward's meeting with the Knicks, a league source told ESPN.com.

When asked by reporters after the Lakers' pitch whether he was meeting with Bryant later Thursday night, Anthony said, "We'll see."

Anthony has met with the Chicago Bulls, Dallas Mavericks and Houston Rockets already this week.

Among the contingent meeting with Anthony at the Toyota Center were Dwight Howard and guard James Harden, owner Les Alexander, general manager Daryl Morey and coach Kevin McHale. Hall of Famer Clyde Drexler also was there to help with Houston's pitch.

Anthony's meeting in Dallas took place at the mansion of Mavericks owner Mark Cuban, according to a source, and lasted more than two hours. It was attended by Cuban, star forward Dirk Nowitzki, coach Rick Carlisle and president of basketball operations Donnie Nelson, sources told ESPN.

Derrick Rose, who had previously said he wouldn't help recruit Anthony, was part of the Bulls' pitch meeting Tuesday. A source described the meetings, which included appearances from Joakim Noah, Taj Gibson and Rose, as "good" to ESPNChicago.com's Nick Friedell.

Chicago's rising interest in Pau Gasol, sources told ESPN.com's Marc Stein and Ramona Shelburne, is indeed a reflection of the Bulls' concern that -- despite their recruiting efforts Tuesday when Anthony came to town -- they will be unable to pry the All-Star forward away from the Knicks.