Kyler Murray owns his future in a truly historic sense

10 and a half hours away dropping everything at a moment's notice to come see you. It is leverage and, even more, the desire to use it. It is the ability to say absolutely nothing and still be saying everything. And in the case of Kyler Murray, who has not seen a single pitch in professional baseball, who has not thrown a single pass in professional football, and who nevertheless has MLB and the NFL frothing over the notion of him choosing their sport, power may be best illustrated by his capacity to make it seem that what he's doing isn't utterly singular.
In recent weeks, as the MLB Players Association brainstormed before a bargaining session with the league, the union considered asking for dual-sport athletes entering the MLB draft to be eligible for major league contracts, rather than minor league deals subject to a capped amount of spending. In other words: The MLBPA wants a Kyler Murray Rule before it even knows if Kyler Murray is going to play baseball.

This is what Murray does. He gets people dreaming. He has barely played baseball, and the Oakland A's believed in him enough to choose him with the ninth pick in the 2018 draft and guarantee him $4.66 million. Listed by Oklahoma at 5-foot-10, he is shorter than any quarterback in the NFL, and teams are lining up to choose him in the first round anyway. He is a walking (and running and throwing and swinging) curio, the evolutionary offspring of Bo and Deion, the answer to a question nobody ever bothered asking because it seemed too far-fetched: What if there were someone good enough to play quarterback in the NFL and start in center field in MLB?

Since his Heisman coronation this winter, Murray has mostly stayed mum. As his football season at Oklahoma progressed, though, his rock-solid commitment to baseball wavered: "I can't put it into words, but I'm just thankful" became "As of now, that's the plan" became "It's never bad to have options."

Whatever his decision, the process was always going to play out differently from that of almost any other rookie in the history of sports. Murray owns his future. And to understand why that's so important to him, one simply needs to look at the past.

of 1982, on an awful Rookie ball team in Pikeville, Kentucky, an 18-year-old from Dallas named Kevin Murray hit .161 over a homerless 124 at-bats. He was miserable, even with the $35,000 signing bonus the Brewers gave him after taking him in the 11th round of the draft. When the season was over, he decided he wanted to play football.

Texas A&M loved him. Murray joined the team in spring ball, intent on quitting baseball, at which point the Brewers filed a federal lawsuit seeking an injunction to prevent him from playing football. His baseball contract said no football, and the Brewers argued he was in breach of it.

Eventually, Murray won the right to play, and he started for three seasons at A&M, setting a season record for passing yards and winning 25 games, then a program record for a QB, before entering the NFL draft in 1987. Nineteen quarterbacks were among the 335 players selected. Whether it was because he was a black quarterback or because an ankle injury scared off teams, Murray's name was not called.

This is the foundation on which he advises his son, Kyler, and it's why control is at the heart of Kyler's story. He and his family -- father Kevin, mother Missy and his uncle Calvin, a former MLB player and today an employee of agent Scott Boras -- understand this dynamic more than anyone: The athlete is the game, not vice versa. He should brandish the power. He should be able to remind baseball that football is always there, and he should tell football that baseball is a possibility. He should do both without fear that either will do what it did to Kevin Murray.

Kyler's options today would be beyond his father's wildest dreams. He is due to arrive at spring training for the A's on Feb. 15. If he doesn't arrive by March 1, he'll be asked to return six-sevenths of the $1.5 million the A's have paid him -- and he'll lose out on the $3.16 million he's still owed. Even in that case, Murray would be put on Oakland's restricted list, meaning that if he doesn't go where he'd like in the NFL draft on April 25, he'd have the ability to negotiate another deal with the team.

Already the posturing has started: If football wants Murray, he could ask his new team to pay extra for forgoing baseball. If baseball wants Murray, it'll likely need to convert his minor league contract into a major league deal and guarantee him the sort of money he'd make as a first-round NFL pick.

Make no mistake: As much as this is a leverage play, Murray does love baseball. The problem? As one source who knows him well says, "He really loves playing quarterback." So when it came time for MLB to make its sales pitch, the league understood Kyler's history -- and played right to it.

conference room in Dallas on Jan. 13, Murray sat with his parents, his uncle, Boras, A's owner John Fisher, general manager David Forst and assistant GM Billy Owens. They were listening to someone who understood the allure of playing baseball and football.

Billy Beane was supposed to go to Stanford, where coaches had designs on him playing outfield and eventually taking over at quarterback once John Elway went to the NFL. Beane instead signed with the Mets. When his playing career flopped, he fell into a two-decade run as one of the sport's most creative and influential executives, and his latest magic trick was to try to persuade Murray to leave football behind.

To baseball -- not just the A's but the sport writ large -- beating the NFL for Murray would be a coup. Baseball lacks stars. It fails to ensnare the best athletes. Murray is both. And so as Kevin Murray started asking questions about where Kyler fit into the grand scheme of the game, in jumped Barbara McHugh, MLB's senior vice president of marketing. MLB believed the sell to Murray was important enough to bring her in from London, where she was preparing for this summer's Yankees-Red Sox series.

She showed the room the "Let the Kids Play" ad that featured Ken Griffey Jr. and baseball's best young talent. She tried to sell the idea that baseball, whose trouble marketing its players is one of its most acute concerns, could help increase Murray's profile and footprint. Fisher, the owner, emphasized Oakland's in-the-works stadium and commitment to winning. Overall, baseball used the meeting to convince Murray that it would not treat him like it treated his father.

On and on it went, for three hours, ending with thanks and appreciation and no clearer sense of what, exactly, Murray wanted.

weeks of silence, Murray emerged leading up to the Super Bowl in a number of public appearances for sponsors. The timing was unfortunate. There was one question to answer, and he had less than zero desire to answer it. When Dan Patrick tried to pin Murray down on his radio show, wondering if he'd hold a pro day at Oklahoma or go to the NFL combine (it has since been reported that he would), the exchange had all the awkwardness of a sixth-grade dance.

"Are you gonna do a pro day?" Patrick said.

Murray laughed. He looked toward his father. He looked back at Patrick.

"That would imply that I was going to play football," Murray replied.

"Ooh, you knew that. OK," Patrick said. "So you're ready to go to do that." Pause. "Wait. Are you going to spring training?"

Murray flared his left hand to signal he didn't know.

"Wait. You don't know?" Patrick said. "Dad, is he going to spring training? Another no comment here."

Patrick inhaled a cleansing breath. "You know, these microphones are on right now?"

"I'm getting pretty good at answering these questions," Murray said.

"No, you're not answering them," Patrick said.

Exactly. When there's a choice and everyone wants a piece of it -- the brands, the marketing nexus, the scoop hunters, the hangers-on, the social media gadflies -- the easiest thing to do is offer nothing.

The game, Murray said without saying anything, will be played on his terms. 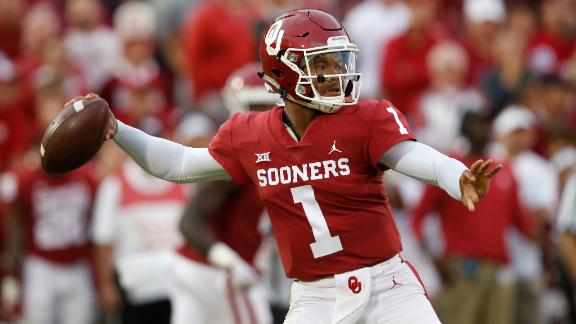