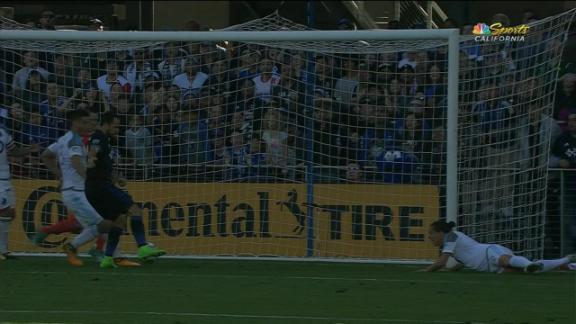 Montreal will receive defendersJukka Raitala and Raheem Edwards, whom LAFC selected with its final two picks in the draft from Columbus and Toronto, respectively.

Ciman, 32, was named MLS defender of the year in 2015 and helped Belgium qualify for the World Cup this year.

"Laurent is a top defender who provides leadership and great distribution," LAFC coach Bob Bradley said in a statement. "His experience in the league and with the Belgian national team will be invaluable as we build our club."

Raitala, 29, is a Finland international who started 20 games for Columbus last season as well as the first leg of the Eastern Conference final against Toronto.

Edwards, 22, will leave his native Toronto after providing one goal and six assists in 21 appearances for the MLS Cup champions last season, commonly as a second-half substitute. But he'll be able to stay in Canada after the Ciman trade.

"There's two parts to what happens today," Bradley told ESPN FC after the Ciman trade. "There's the part of picking some players -- some with experience, some young talent -- that you feel good to work with and put out on the field.

"And then you pick players that you think have value that make for good discussions moving forward. Today is a step in the process towards building a team."

Bradley suggested Miller, Blessing and Urena all have a future with LAFC as he shapes the roster around the three prominent players the team has already acquired: Mexico forward Carlos Vela, Egypt defender Omar Gaber and U.S. defender Walker Zimmerman, who joined on Sunday in a trade with FC Dallas.

Miller, 24, spent the past two years stuck behind Stefan Frei with the Sounders, playing in one MLS game each season, but he could now get his chance to start on a regular basis. The Sounders had exercised his 2018 contract option hours before the draft.

"I think Tyler is a young, talented goalkeeper, good size, and so for me I think it fits that you've got somebody who is very motivated to step in," Bradley said. "We are obviously high on what we see."

Blessing, 20, scored three goals while making 16 starts for Sporting KC in his first season in MLS, after being the top scorer in theGhana Premier League in 2016.

"In his first season in the league, [Blessing] showed that he can do certain things that can make a difference," Bradley said. "He can go by people on the dribble, he can play different roles up front. If you look back at the U.S. Open Cup run and final, he's a talented, young player."

Urena gained some notoriety in September when he scored twice as Costa Rica beat the United States in a key World Cup qualifier. The 27-year-old scored five goals in 25 appearances for San Jose in his first MLS season, including a dramatic stoppage-time winner in the final regular season game that put the Earthquakes in the playoffs.

"[Ureña] is a presence up front," Bradley said. "He's fast, he can get behind people, he works hard, and he's been very important for Costa Rica. I think that when you get Marco in the right situation that he can be a consistent goal scorer.

"At club level so far, people point to the fact that he hasn't been as productive as you want from a No. 9. But he gets chances, and he's scores some very good goals. We look forward to working with him."

MLS teams were allowed to protect 11 players from their squad, in addition to homegrown and Generation Adidas players on their first contracts. LAFC could only pick one player from a team.

Not selected was Seattle Sounders captainOsvaldo Alonso, who on Sunday tweeted his unhappiness at being left unprotected for the draft.

"I hate it when people use you for what they want," Alonso wrote. "Then they just push you aside like [you're] nothing. But they keep you close just in case they need you for something."

With the conclusion of the draft, the league's free agency period officially opened for playerswho were at least 28 years old during the 2017 season and have at least eight years of MLS service.