LeBron James on future with Cavaliers: 'No idea at this point' 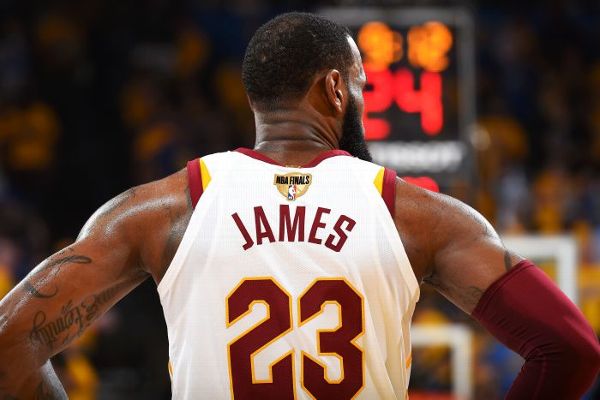 CLEVELAND -- After being swept out of the NBA Finals by the Golden State Warriors with a 108-85 Game 4 loss, LeBron James says he has "no idea at this point" if Friday was the last game he'll ever play with the Cleveland Cavaliers.

"The one thing that I've always done is considered, obviously, my family," James said after putting up 23 points, eight assists and seven rebounds while playing through a right hand injury. "Understanding especially where my boys are at this point in their age. They were a lot younger the last time I made a decision like this four years ago. I've got a teenage boy, a pre-teen and a little girl that wasn't around as well. So sitting down and considering everything, my family is a huge part of whatever I'll decide to do in my career, and it will continue to be that. So I don't have an answer for you right now as far as that."

Indeed, the first people James greeted when he walked off the court after Game 4 was over were his 13-year-old son, LeBron Jr. and 10-year-old son, Bryce before making his way to the locker room where he sat still, slumped in his chair with a towel over his face, in the immediate aftermath of his sixth loss in nine career trips to the Finals.

James has to inform the Cavs whether he intends to opt out of the final year of his contract with the team by 11:59 p.m. on June 29th. Should be opt out and become an unrestricted free agent, Cleveland can outbid any other suitor by offering him a five-year "supermax" contract worth approximately $209 million. Other organizations can pitch James starting on July 1, but the Cavs don't have to wait since he is already on their team.

Sources close to James told ESPN that no conversations with Cleveland's brass about the four-time MVP's future with the franchise had occurred as of Friday night.

In terms of James' strategy, there are no plans right now for the three-time champion other than spending time with his family, sources close to James told ESPN. He will inform his advisors when he is ready to talk about his potential options.

James has changed teams during free agency twice in his career: First in 2010 when he left Cleveland to join the Miami Heat, leading to four Finals trips and two rings and the second time in 2014 when he returned to the Cavs, resulting in four more Finals appearances and an additional ring.

"I came back because I felt like I had some unfinished business," James said of his 2014 decision, which he characterized as the easier of the two major changes he made. "To be able to be a part of a championship team two years ago with the team that we had and in the fashion that we had is something I will always remember. Honestly, I think we'll all remember that. It ended a drought for Cleveland of 50-plus years, so I think we'll all remember that in sports history."

There is no working list of teams that James is considering at this point, sources close to James told ESPN. In fact, his agent, Rich Paul, purposely delayed having that conversation until after the season was over as to not take any focus of the Cavs' quest for a championship.

While James mentioned his family as an important factor in what he will ultimately decide, he reiterated the weight that the chance of winning additional championships will have.

In James' 15th season, he played all 82 games for the first time in his career and averaged 27.5 points (his most since 2009-10), tied a career high with 8.6 rebounds per game and set a career high with 9.1 assists per game while shooting 54.2 percent from the field. He followed that up in the playoffs by averaging 34 points, 9.1 rebounds and 9 assists while shooting 53.9 percent.

James shared what his priorities were when he relocated for the first time from Cleveland to Miami.

"When you feel like you're really good at your craft, I think it's always great to be able to be around other great minds as well and other great ballplayers, in my instance, and other great just, I think, studies of the game itself," James continued. "That's never changed. Even when I came here in '14, I wanted to try to surround myself and surround this franchise with great minds and guys that actually think outside the box of the game and not just go out and play it."

Cavs coach Tyronn Lue said, "I hope he stays," when asked about James' future, adding: "After a game like that, I'm not in any position to talk about that. I just appreciate what he's done for us this season. That's all I can really speak about."

Cleveland forward Kevin Love also lobbied for James to be in Cleveland.

"Obviously, I'd love to play with LeBron the rest of my career, but that will be a choice that he makes," Love said.

James said at this stage of his career it is "uncomfortable" to start a team from scratch, which could be the scenario he finds himself at training camp next fall. Then again, James basically had an entirely new team to figure out after the Cavs overhauled their roster in February, and he managed to make it back to the Finals.

"Being a part of the start-fresh mode is something that you definitely don't want to be a part of," James added. "It has its pros and it definitely has its cons."

Much like James carried the Cavs with eight 40-plus point games during the 2018 playoffs, setting a record for most 40-point games in a single postseason, he said that for as much input he will seek in the coming weeks, the decision will be his alone to make.

"When I decide what I'm going to do with my future, my family and the folks that have been with me for the last, you know, 20 years, pretty much, will have a say-so," James said. "Then it ultimately will come down to me, and so we'll see what happens."