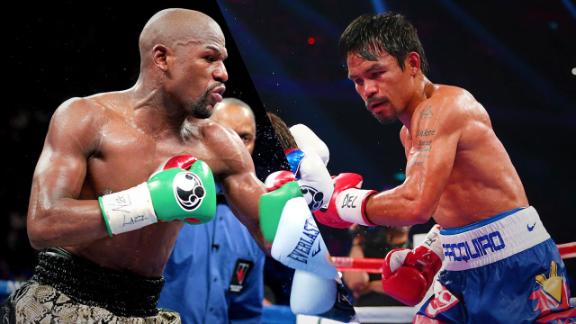 Manny Pacquiao is already doing some light training in the Philippines in preparation for his mega pay-per-view showdown with fellow welterweight champion Floyd Mayweather Jr. on May 2 at the MGM Grand in Las Vegas, but the excitement and hoopla in Pacquiao's home country over the long-awaited fight finally being made has been intense.

That is why Pacquiao, who was not expected to come to the United States until March 8 to begin the serious part of his training camp at trainer Freddie Roach's Wild Card Boxing Club in Hollywood, California, is planning to arrive a week ahead of time.

"Manny called me and said it's been so crazy in the Philippines that he is going to come over here early and probably start at Wild Card on March 2," Roach told ESPN.com on Thursday. "Having him early is really nice for me. We'll have Justin Fortune doing strength work with him, and then we'll begin the boxing part and start sparring."

Roach will not be at the gym for the first several days after Pacquiao's arrival because he is going to Macau on Friday. Roach will be with two-time Chinese Olympic gold medalist Zou Shiming (6-0, 1 KO) for his bid to win a flyweight world title from Thailand's Amnat Ruenroeng (14-0, 5 KOs) on March 7 at the Cotai Arena.

With Pacquiao coming to camp early, Roach initially told him he was going to stay in California and have assistant Marvin Somodio, who has been training Shiming in Shanghai, finish camp and run the corner.

However, Roach said that Pacquiao "insisted that I go help Shiming. Manny said, 'I can train for a few days by myself and with the staff.'"

So Somodio will fly from China to Los Angeles to oversee the first few days of Pacquiao's camp at Wild Card.

"Manny told me I should be with Zou because he knows how important this fight is for him," Roach said. "The thing is, Manny is that type of guy. He cares about other people. He knows Shiming has a better chance to win if I'm there with him."

According to Roach and Pacquiao promoter Top Rank, the kickoff news conference for Mayweather-Pacquiao is expected to take place shortly after Roach returns from China -- likely March 10 or 11 in Los Angeles, where Mayweather and Pacquiao will meet head to head for the only time during the promotion.

As big as the fight is -- expected to easily shatter every boxing revenue record -- there will not be a multicity promotional tour. Instead, there will be one kickoff news conference and then one a few days before the fight in Las Vegas.

Roach, voted this week as trainer of the year by the Boxing Writers Association of America for a record seventh time, has been pushing for this fight for ages and learned that it was official Friday along with everyone else. He said he was at his gym when he saw the breaking news on ESPN.

"I'm very happy, and I'm very confident we will win the fight," Roach said. "I have a good game plan for Manny, and I've altered the game plan some over the last five to six years since this fight has been something everyone wanted to see. I've made adjustments to it since both guys are a little older. I'm watching tape on their last two fights each.

"They're not the same as they were five years ago, but it's a winnable fight for us if we fight the right fight. This is the biggest fight of my life. There's a lot of pressure, but I'm not going to be nervous. Pressure is good. I want to perform, and I want my fighter to do the best he can."

Roach said he understood why Pacquiao is the underdog in the fight.

"We just need to have the right strategy to beat this solid fighter," Roach said. "Mayweather is a slick guy, and he is not the easiest guy in the world to fight. He's undefeated for a reason. He's very smart. The thing is we have to attack him a lot and have that ring generalship, and Manny has to work on cutting off the ring. Everything will come together. Manny and me have already been talking about the strategy. Once he gets here, he knows what I want from him."

Roach said he already has two sparring partners lined up for Pacquiao in 21-year-old pros Kenneth Sims Jr. (5-0, 2 KOs), a junior welterweight and former amateur standout from Chicago, and Rashidi Ellis (13-0, 10 KOs), a welterweight out of Lynn, Massachusetts, both of whom he said have worked out at Wild Card and caught his eye.

"They arrive on March 8," Roach said. "I'm very impressed with their talent. I know they're young guys, but they're good. They have that Mayweather look a little bit. I have four other guys in mind for later on in camp.

"There's a lot riding on this fight. It's a big one. It's exciting. People are congratulating me that we got the fight. I said, 'Don't congratulate me now. Congratulate me when we win it.'"

Making The Rounds: Mayweather-Pacquiao Is On
Jim Basquil, Brian Campbell and Dan Rafael compare how each Floyd Mayweather Jr. and Manny Pacquiao did against common opponents and how big this fight can be for the sport of boxing moving forward.

Making The Rounds: Details Behind Floyd-Manny
Jim Basquil and Dan Rafael discuss the details that made the Floyd Mayweather Jr. and Manny Pacquiao superfight a reality.

Basketball To Thank For Superfight?
Showtime Sports executive VP and general manager Stephen Espinoza discusses how important that meeting between Floyd Mayweather Jr. and Manny Pacquiao at a Miami Heat game was to making their May 2 fight a reality.