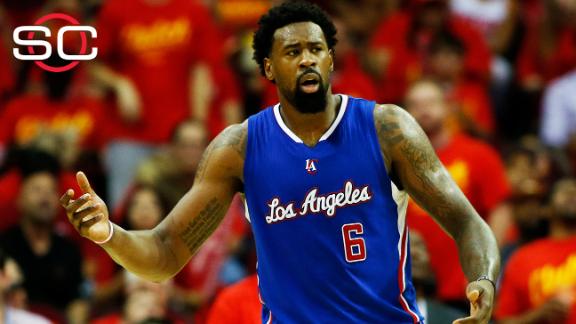 DALLAS -- Mark Cuban started to address the Dallas Mavericks' dire situation Thursday after DeAndre Jordan's stunning decision to renege on his verbal commitment and re-sign with the Los Angeles Clippers.

"There's nothing you can do about it," Cuban said Thursday when asked about the ordeal at a Presidential Leadership Scholars graduation ceremony at SMU. "You think for a second, 'Is there anything I could change?

"You think for another second, 'What have I learned so I can do it differently next time?' And then you move forward and say, 'What are our options?'"

Earlier Thursday, Cuban said that Jordan still hasn't contacted him about the matter.

"I don't think the time is right to say anything beyond the facts that he never responded to me at all yesterday. Not once," Cuban wrote Thursday morning in a Cyber Dust message to fans that never mentioned Jordan by name. "To this minute I have not heard anything from him since Tuesday night.

"More importantly, I specifically told [Wesley Matthews] that I would not hold him to his commitment if he wanted to go elsewhere. I can't print his exact response, but suffice to say he is excited to play for our Mavs:) Wes Matthews is exactly the kind of player we want in a Mavs uniform and our fans will love him

The Mavs secured a verbal commitment from Jordan on Friday, when Cuban and Dallas small forward and lead recruiter Chandler Parsons visited the third-team All-NBA center at his suburban Los Angeles home the morning after his meeting with the Clippers.

Matthews, a shooting guard who had several discussions with Parsons and Jordan about the trio playing together, committed to the Mavs the previous night with the belief that Jordan would also be coming to Dallas. Matthews will sign a four-year deal worth more than $50 million.

Jordan had second thoughts about his decision on Monday and reached out to Clippers coach and team president Doc Rivers, sources told ESPN's Marc Stein and Ramona Shelburne.

Rivers and a Clippers contingent that included owner Steve Ballmer and players Chris Paul, Blake Griffin, J.J. Redick and Paul Pierce visited Jordan at his Houston home on Wednesday to secure his commitment to return to L.A., with most of the group staying at the house until the moment the NBA moratorium ended and the center could sign his four-year max contract.

Two NBA general managers who weren't involved in the saga wonder if Jordan's turnabout will spark leaguewide change in how the offseason moratorium -- and really, free-agent talks in general -- get handled going forward.

"It's a weird way to do business where agents will tell you we've signed a guy and we can't comment," Brooklyn GM Billy King told reporters Thursday. "And so I think from both sides I think everybody realizes it's something that has to be looked at.

"In all the years I've been I guess doing this job or been in the league, I've never seen it. And I think it's only going to get worse. ... So I think as a league we have to look at it and maybe start the signing, everything starts the same time when the moratorium ends rather than starting July 1."

Added Orlando GM Rob Hennigan: "The rules have been the rules for a while now. I don't think this is the first time that something like this has happened. But that doesn't mean that it shouldn't be looked at."

In a statement released Thursday, the National Basketball Players Association urged caution for both players and teams during the moratorium.

"The moratorium period exists for both players and teams to thoughtfully weigh and consider options before signing any contracts," the statement said. "And while we fully support the opportunity to review options, we also acknowledge that there is risk to both players and teams for the other party to change his mind during discussions. We all walk into these conversations understanding that as with any business contract, it's not a deal until the paper is signed."

DeAndre Jordan misled by agent?
Chris Broussard and Amin Elhassan discuss DeAndre Jordan's relationship with his agent, Dan Fegan, who sources say was excluded from the Clippers' early-evening meeting with Jordan, and allegations of manipulation.

How the Jordan deal went down
Chris Broussard details how the Clippers persuaded DeAndre Jordan to spurn the Mavericks and re-sign with Los Angeles.