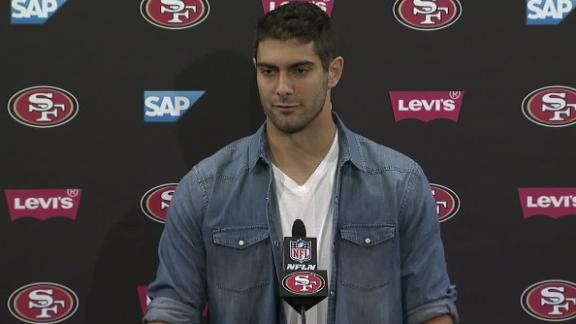 SANTA CLARA, Calif. -- In a year of heartache, San Francisco 49ers wide receiver Marquise Goodwin has persevered and put together the best season of his career.

Following Sunday's 25-23 win against the Tennessee Titans, Goodwin revealed that earlier this week his biological father died. That loss came just five weeks after he and his wife lost their unborn son because of pregnancy complications.

"I've been dealing with a lot," Goodwin said. "I'm blessed. I'm thankful for the opportunity. God has shown me so much in this season. I had a lot going on this year losing my baby, and I just recently lost my biological father this week. It's just been a lot, but I really didn't let the outside negative energy affect how I play, how I approach this game or how I come to work each day. I just kind of stayed positive and kept my mind fresh, and I relied on God to bring me through all of the situations that I've been through."

Much like when Goodwin and his wife lost their baby on Nov. 12, Goodwin followed a personal loss with a strong performance on the field. He finished Sunday's win with 10 catches for 114 yards, including the 14-yard grab that helped set up kickerRobbie Gould's game-winning field goal as time expired.

"Marquise has been unbelievable," 49ers coach Kyle Shanahan said. "I think he's made a huge jump throughout this year. We put a lot of pressure on 'Quise going into this year. He had never started before, and we brought him here to do that for us. He had some up-and-down times at the beginning. By no means would I say he played bad, but he just wasn't as consistent. He's fought through that and, anytime you see guys who go out there and they get the pressure of starting, all of them are going to have some successes and some failures. It's just, how do they respond to it?

"I've been real impressed with 'Quise because as you guys can all see in this second half of the year, especially withPierre [Garcon]down, he's really taken a lot on his shoulders. He's been through a lot, and he's responded well. You guys see it on the field. We see it in practice throughout the week. He's turned into a true pro, and he's playing like a legit starter."

Goodwin has been a key to the Niners' recent three-game win streak, emerging as quarterbackJimmy Garoppolo's favorite target since he became the starter.

In those three games, Goodwin has 24 receptions for 319 yards, catching 73 percent of the passes thrown his way. That recent surge has Goodwin sporting career highs in receptions (51) and yards (897) and within striking distance of his first 1,000-yard season in the NFL.

"'Quise is one of the first guys that came up when I first got here and said hi to me and introduced himself," Garoppolo said. "He's just a hard worker. You really got to tip your hat to that. The extra time that we put in -- not even just with him, but with all the skill position players -- the extra meetings we have, the stuff in practice, the extra routes, it's starting to pay off now."

Goodwin's recent surge also came after a rough start in which he had some costly drops at the beginning of the season. But those struggles paled in comparison to the recent personal losses that he has overcome.

"In the league, you just have drops," Goodwin said. "If you've never played football or if you haven't played in the league especially, you really don't know how hard it is to make every play. You can't really let it affect you. I haven't let it affect me at all. I remain who I am. I keep my faith in God knowing he'll bring me through whatever circumstance that I'm in."