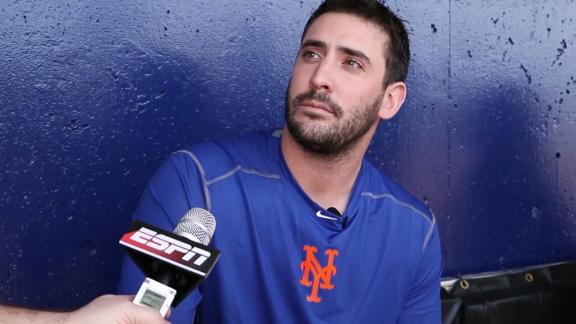 ESPN
By Adam Rubin
PORT ST. LUCIE, Fla. -- Matt Harvey is the first among the heralded young pitchers with the New York Mets to be eligible for free agency. And upon arriving at camp Monday, Harvey did not rule out a long-term extension with the organization.

"I think whatever comes up is going to come up," said Harvey, who is under control through the 2018 season. "I've never shied away from it. I've never said I wouldn't consider it. But I haven't heard anything considering that."

General manager Sandy Alderson indicated earlier this month that there were no current talks about extensions. But Alderson suggested the topic could come up during spring training if mutual interest existed.

Harvey, as a first-time arbitration-eligible player, is due to earn $4.325 million this season.

Agent Scott Boras essentially said Monday that there is no reason to be dismissive of a potential contract extension for Harvey before knowing what is being offered.

"Expectations of an extension are like dinner invitations," Boras told ESPN.com. "They are always politely considered until you know the restaurant."

Harvey, 26, went 13-8 with a 2.71 ERA in 29 regular-season starts last season. Despite a hullabaloo over his innings count, he ultimately logged 216 innings -- including the postseason -- in his first season back from Tommy John surgery.

"It's obviously the first time I've ever done that. That's kind of a milestone you want to reach as a starting pitcher is the 200-inning mark," Harvey said.

Harvey underwent Tommy John surgery on Oct. 22, 2013. That allowed him to have a 15-month rehab process before returning to competitive pitching -- longer than the 12-month process that had become standard around baseball.

It worked out so well for Harvey that the Mets plan to delay Wheeler's return from Tommy John surgery until around July 1. Wheeler underwent the ligament-replacement procedure last spring training.

"When it comes to rest time with the surgery, I think taking a little bit of extra time doesn't hurt," Harvey said.

Pitchers typically perform better in their second year back from Tommy John surgery compared with their first season back. For example, Adam Wainwright had a 3.94 ERA with the St. Louis Cardinals in 2012. He then posted a 2.94 ERA the next year.

If Harvey can duplicate that progress as he puts more distance between himself and the elbow procedure, the result could be remarkable. Harvey's 2.71 ERA ranked sixth in the National League last season.

"Obviously you don't have a crystal ball and can't really predict what the ERA and all of those things look like," Harvey said. "But my body feels great. My arm feels great. I think all of us, as a staff and as a whole organization, feel great about this year."

Of course, Harvey's last appearance for the Mets ended in disappointment. With the Mets leading 2-0 in Game 5 of the World Series, Harvey convinced manager Terry Collins to send him back out for the ninth inning at Citi Field. Harvey proceeded to walk leadoff batter Lorenzo Cain. Collins stuck with Harvey at that point, and Harvey surrendered a run-scoring double to Eric Hosmer. Harvey ultimately was charged with two runs courtesy of Jeurys Familia's blown save in what became a 12-inning loss that eliminated the Mets.

"A lot of people wish they could go back and do things differently or whatnot," Harvey said. "As a whole, I felt great in Game 5. There's a lot of things that we learned as a whole. If everybody knew the outcome going in, I think a lot of people would change things. It's a fresh year, a new year."

Would Harvey consider a long-term deal with Mets?
Matt Harvey weighs in on whether he would consider a long-term deal with the Mets. He discusses whether his second season back from Tommy John surgery could be better than his first, and taking the ball for the ninth inning of Game 5 of the World Series.
Related topics:
sportsespnmatt harveyjacob degromsteven matznoah syndergaarddark night of gothamnew york metsjeurys familiazack wheelermlb
Copyright © 2020 ESPN Internet Ventures. All rights reserved.
More Videos
From CNN Newsource affiliates
TOP STORIES
Residents fed up with crime in SJ neighborhood, demand change
Bay Area Democrats weigh in on latest debate