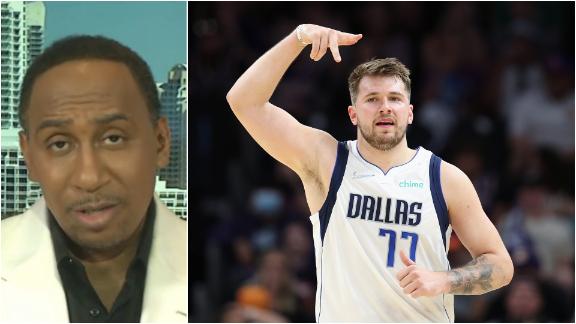 SAN FRANCISCO -- - Many months ago and well before he returned to the court from an injury absence of more than 2 1/2 years, Klay Thompson made a bold proclamation: "It's championship or bust."

Thompson, Stephen Curry and the Golden State Warriors are one step closer to having a chance to make good on those words as they prepare to tip off Game 1 of the Western Conference finals against the Dallas Mavericks on Wednesday night.


"I love the moments. I love the pressure. I love playing basketball at the highest level," Thompson said.

He certainly looks like his old self this postseason after returning in January. Thompson had been sidelined since the 2019 NBA Finals, when he tore the ACL in his left knee during the deciding Game 6 against champion Toronto and had surgery. He was working his way back when he tore his right Achilles tendon and underwent another operation.

Thompson can't wait to lead the Warriors into the best-of-seven series against the surprising fourth-seeded Mavericks, who took down top-seeded Phoenix 123-90 in the deciding seventh game of their series Sunday.

"They're obviously playing at a really high level. They have a lot of guys that have shined this playoff run," Curry said.

A year ago, Giannis Antetokounmpo had his breakthrough moment on the playoff stage leading Milwaukee to a title, and now this might be Luka Doncic's time to do so for Dallas.

"Honestly, I never expected to be here. I'm living my best life. This is a dream," Doncic said Tuesday. "Before Game 7, I was thinking this might be my last game of the NBA season. But I wasn't ready. I wanted to play basketball. Tomorrow, another basketball game that I will enjoy."

Warriors coach Steve Kerr, whose Warriors reached five straight NBA Finals from 2015-19, knows what his team is up against.

"He's a really unique player and clearly one of the very best players in the league. I think the ability to shoot the step-back 3 and also get to the rim and pass the ball so well makes him a really difficult cover," Kerr said.

Doncic and Mavs great Dirk Nowitzki, who led Dallas to the 2011 title, shared a moment on the court in Phoenix after Game 7. At 24, the big German was a year older than Doncic when he reached the West finals for the first time with the Mavericks in 2003. Dallas lost to San Antonio in six games and Nowitzki missed the last three with a knee injury.

Nowitzki played with Doncic when the Slovenian was a rookie in 2018-19, then retired after a record 21 seasons with the same franchise and took two years off before becoming a team consultant.

"He was just happy," Doncic said of their conversation Sunday. "I think he gives everybody on this team a lot of confidence when you see Dirk sitting courtside. I think everybody really appreciates him because Dirk is Dirk. He's been through everything. He's been a champion so he knows it."


It's also a breakthrough of sorts for the Mavs' Jason Kidd, who is in his first season as coach of the team he helped win a title as point guard. Kidd led Brooklyn to the second round as a rookie coach in 2013-14, the season after the Hall of Famer retired as a player. Kidd couldn't get Milwaukee out of the first round in two tries over three seasons. He was fired during his fourth season with the Bucks.

The Dallas defense certainly presents a challenge for the Warriors' high-powered offense.

The Suns shot at least 50% in their first eight playoff games before Dallas held Phoenix under that mark the final five games. The Suns shot 24% in the first half of Game 7 while falling behind by 30.

Dallas was second to Boston in fewest points allowed per game during the regular season, the highest finish in franchise history. The Celtics finished at 104.5 and the Mavs at 104.7.

The teams haven't met in the playoffs since coach Don Nelson's "We Believe" Warriors team of 2007 led by Baron Davis upset the top-seeded Mavericks in six games - stunning Nowitzki and Co. in one of the biggest shockers in NBA history after Dallas had lost in the 2006 NBA Finals to the Heat.

Golden State ended a franchise-worst 12-year playoff drought that season and won a best-of-seven series for the first time in 31 years.

The Warriors became only the third eighth seed to upset the No. 1 and the first since the opening round went from best-of-five to the current format. The Denver Nuggets (1994) and the New York Knicks (1999) were the other teams.

"I just remember the energy, I didn't really know much about Dub Nation at the time or what was going on out here in the Bay," Curry said. "I was at Davidson. You could just tell how electric the building was coming through the TV."


Kerr insisted he wouldn't discuss turnovers with the Warriors this time, saying he's using "the opposite theory" straight out of sitcom "Seinfeld."

"It's been the No. 1 key on our board for about 72 straight games so there's no point. I think if I don't say anything then we're going to take care of the ball," Kerr said.

The Warriors committed 19.2 turnovers per game over the six contests against the Grizzlies in the conference semifinals, including one with 24 and another with 22.

Kerr acknowledged a near mishap of his own while watching the sloppy play in the Game 6 clincher Friday night while at home with COVID-19.

"The beer mug that I was drinking my beer out of was close to being shattered after a few of those turnovers," he said with a smile.

Golden State forward Otto Porter Jr. was listed as probable for Game 1 after he missed Game 6 versus Memphis with soreness in his right foot.

Guard Gary Payton II hadn't been ruled out to return at some point this round from a broken left elbow he suffered when he crashed to the floor after a hard foul by Dillon Brooks that earned the Memphis forward a Flagrant 2 foul, ejection and one-game suspension.