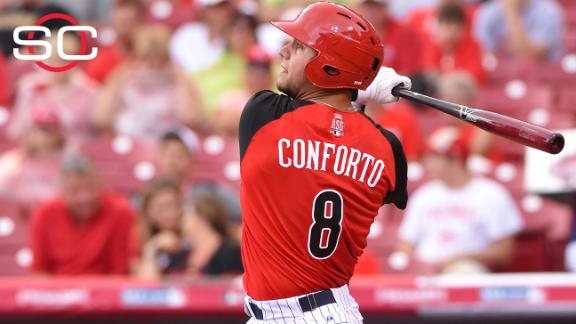 NEW YORK -- Michael Conforto had joined Double-A teammates for a weightlifting session in Trenton, New Jersey, on Friday morning when Binghamton manager Pedro Lopez approached the New York Mets prospect while grinning and on the phone.

While lying on the ground doing hamstring exercises, Conforto received word of his promotion to the majors. He replaces outfielder Michael Cuddyer, who landed on the disabled list with a bone bruise in his left knee.

Conforto, who is wearing No. 30, became the 1,000th player to appear for the Mets in the franchise's 54-year history. He went 0-for-3 with an RBI groundout, batted seventh and played left field in Friday's 7-2 loss to the Los Angeles Dodgers at Citi Field.

The 22-year-old has appeared in only 45 games at the Double-A level, but he was hitting .312 with five homers and 26 RBIs in 173 at-bats. Known as a gap hitter with good strike zone judgment, scouts compare him to fellow lefty hitters Yonder Alonso and Todd Hollandsworth.

The 2014 Pac-12 Player of the Year at Oregon State, Conforto was selected 10th overall by the Mets last year. He became the first position player in franchise history selected in the opening two rounds to reach the majors the year after being drafted.

"Last year around this time, I was just getting started in Brooklyn," Conforto said, referring to the Mets' New York-Penn League affiliate. "At that point, it seemed a little bit far away. Going through the minor leagues and experiencing everything, I felt myself feeling like it was more real and let myself get a little bit excited.

Manager Terry Collins said Conforto will not play every day, although he will not be in a straight platoon, either. In fact, Conforto's major league debut came against Ian Thomas, a southpaw.

Collins met with Conforto on Friday afternoon and cautioned him not to try to be a "savior."

The Mets entered Friday's game with an MLB-worst .233 team batting average. Only the Chicago White Sox had scored fewer runs.

The duration of Conforto's stay at the major league level will be contingent upon multiple factors, Alderson said. Those factors include whether the Mets acquire an outfielder before the July 31 non-waiver trade deadline, Conforto's performance and the length of Cuddyer's absence.

Cuddyer tried running on a treadmill at the Hospital for Special Surgery on Friday morning, but medication has not alleviated the discomfort and inflammation linked to the bone bruise below his left kneecap.

Alderson said Conforto's promotion might have occurred at some point anyway to upgrade the offense, but Cuddyer's injury made it logical now.

"Because it's tied to a disablement, this is not something where there's necessarily an expectation he's going to be here the rest of the season," Alderson said.

The GM added that the decision to promote Conforto is not an indication the Mets will be less active at the trade deadline.

"This is not indicative of how aggressive or less aggressive we're going to be," Alderson said. "This is somewhat independent."

Alderson on Thursday had suggested that even highly regarded prospects tend to have an adjustment period to the majors. He noted that the quick start to Kyle Schwarber's major league career with the Chicago Cubs is the exception rather than the norm.

Still, Alderson suggested that Conforto has the makeup to withstand any early struggles.

"He's very mature," he said. "He has handled a lot of things very well, including the recent attention that he's received from the media."

Said Conforto: "I haven't played in big league games. So really there's no way for me to really know if I'm ready."

Conforto had heard the recent chatter about him. As the calls for his promotion escalated, Conforto went 0-for-5 with a strikeout for Binghamton against the New York Yankees' Eastern League affiliate Thursday night.

"I had some words from my dad and my mom just to try to block it out and put the blinders on and just play the game," he said. "I won't say it was easy, but I had to do it. I had a job in the minor leagues and had to go out there and learn as much as I could while I was there. It was difficult, but it's the name of the game. I mean, we're here in New York. That's what you've got to do."