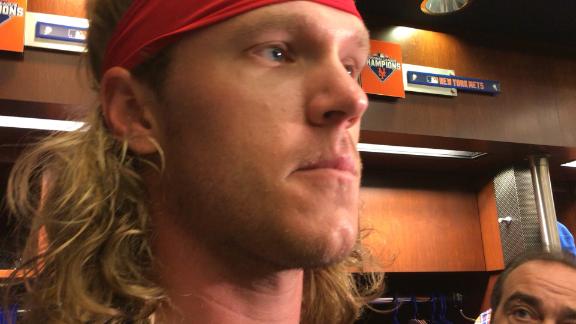 Syndergaard's fastballs registered as low as 91 mph in his final inning, which alarmed manager Terry Collins. Syndergaard was pulled midway through an at-bat by Jayson Werth.

"I think it's just that time of the year -- my first full season in the big leagues," Syndergaard said. "I've thrown a lot of pitches. I've thrown a lot of innings so far. I just think it's a little bit of fatigue. There's no pain. There's no discomfort in my elbow regarding the spur. I felt like I could still go out there and pitch through that. It really boils down to a little shoulder fatigue."

Syndergaard has a bone spur in the back of his pitching elbow and is being treated with anti-inflammatory medication.

He suggested after Friday night's game that he didn't need an MRI because he had no pain.

"I've had two MRIs so far [this season], and all of them have come back with a very healthy ligament," Syndergaard said. "There's no pain. So I see no reason to get an MRI. I got checked out after the game, once I got pulled out. There was no concern from the doctors."

Said Collins: "He just said his arm went dead. It just got tired on him, and his stuff went away."

Both players will not be available to participate in Tuesday's All-Star Game.

"It's disappointing, but hopefully there will be a lot more," Syndergaard said.

Juan Lagares entered the game for Cespedes, and rookie Seth Lugo took over on the mound for Syndergaard.

With only two games remaining until the All-Star break, Collins suggested the Mets probably would play short-handed for the remainder of the weekend and see how Cespedes is doing after the All-Star break in a week. Cespedes said he had a similar injury in spring training in 2015 with the Detroit Tigers and was unavailable for only four or five days.

"Hopefully it doesn't translate into me going on the 15-day DL," Cespedes said through an interpreter.

Said Collins: "When you've got strains, that's an issue, especially when you're as strong as he is."

"I guess it's part of the game," Collins said about the rash of injuries. "I've never had it in such mass before to where every day it's hard to walk into this [interview] room because the conversation is about who got hurt tonight. As you guys know, I'm a little tired of talking about it. It's my job to talk about it. But I'm running out of things to say. And we're running out of bodies.

"We're just going to have to keep going. I've told you before: No one in baseball feels sorry for us. And so we'll just have to suck it up and come in tomorrow and get ready to play with the bodies we have available."