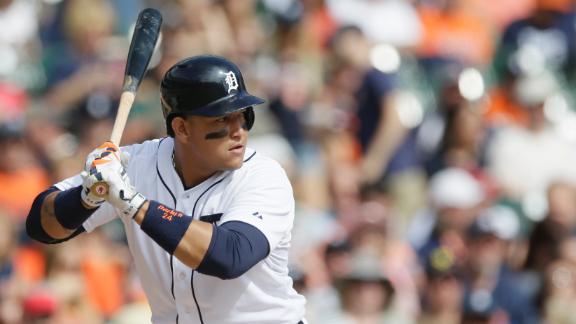 Miguel Cabrera is putting his money where his mouth is.

The Detroit Tigers first baseman opted against signing the paperwork necessary to make him eligible for his playoff bonus, USA Today Sports reported.

According to the newspaper, Cabrera was sitting at his locker Wednesday when teammate Max Scherzer came around collecting signatures from the team.

Designated hitterVictor Martinez, who had just signed the paperwork, had a conversation with Cabrera in Spanish. Cabrera maintained his position, concluding by saying: "I just want the ring."

Scherzer, who also had tried to talk with Cabrera, finally shrugged and walked away. "OK, more for us," he said.

A full share of the postseason bonus for players on last year's World Series-winning Boston Red Soxteam was worth $307,000. Portions of the bonus also are allocated to support staff such as clubhouse attendants.

Cabrera signed a 10-year contract worth nearly $292 million with the Tigers last offseason. He has won two straight MVP awards -- but just one World Series ring, back in 2003.

The Tigers open their 2014 playoff hunt Thursday against theBaltimore Oriolesin the ALDS.

Preparing For Pitchers
Doug Glanville talks about how hitters can prepare for a pitcher they haven't faced in a while.