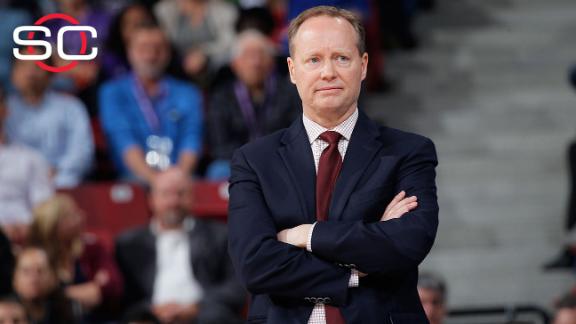 ATLANTA -- Mike Budenholzer was named the NBA Coach of the Year on Tuesday after guiding the Atlanta Hawks to the league's second-best record and the No. 1 seed in the Eastern Conference playoffs.


Budenholzer received 67 out of a possible 130 first-place votes and 513 overall points, finishing ahead of Golden State Warriorscoach Steve Kerr (471 points).

The Hawks went 60-22 this season, their second under Budenholzer, finishing with their best regular-season record in franchise history.


A longtime assistant in San Antonio who started as a video coordinator under Spurs coach Gregg Popovich, Budenholzer learned that he won the award when he received a phone call from Popovich on Monday morning.


Budenholzer thanked his mentor in an acceptance speech Tuesday afternoon at Philips Arena.


Popovich was happy that his former assistant received the award and said he had a chance to talk to him on Tuesday.


"I'm thrilled for him, obviously. He's a wonderful person, heck of a coach, and it's great that people noticed and understood what a good job he did. I'm sure he doesn't even know which way to turn, but he's a happy camper for sure," he said.


"I'm proud and happy for him; the job he's done in his second year to kind of turn that team into what he wanted it to be, and to be on the top of the East with the best record is a great accomplishment," he said.


Budenholzer credited his roster of players and staff of assistant coaches with the success of the season.


"We have an incredible group, and every day the work and the commitment that they put in is very special," Budenholzer said. "It makes me want to get better so that I can keep pace with them, the pace with which they work, the effort with which they put in to improve. It forces me to keep up with them and to keep getting better myself."

The son of a high school basketball coach, Budenholzer became emotional when he recognized his father, Vince.


"He was a high school coach in Holbrook, Arizona, forever, winning a lot of games, winning a state championship with my brothers, giving me a love for the game," Budenholzer said. "My dad, he taught me a lot about life and basketball, and I was thinking about him and how important competing is."


Budenholzer has installed a motion offense -- inspired by the Spurs -- that has the Hawks ranked second in the league in assist rate. Hawks players have repeatedly cited the unselfishness that the system encourages with their performance on the floor, and took the occasion of the award to salute Budenholzer.


"The way that we run our offense and everything, it's because of what he does," Al Horford said following the announcement of the award. "We take after his personality with the way that we play. We're just all really happy for him. It's a great day today."


Budenholzer has also served as the Hawks' senior executive in basketball operations since September, when general manager Danny Ferry took a leave of absence. In his speech, Budenholzer expressed his gratitude to Ferry for hiring him following the 2012-13 season.


After a 7-6 start, the Hawks built momentum in December and into the new year. They set a franchise record with a 19-game winning streak and in January became the first NBA team to go 17-0 in a calendar month.


The streak brought a commanding lead in the East, and Atlanta finished seven games ahead of the overwhelming preseason favorites, LeBron James and the Cavaliers.


Kerr, who coached the Warriors to a league-best 67-15 record in his first season, received 56 first-place votes.


ESPN.com's Michael C. Wright and The Associated Press contributed to this report.