NBA playoffs 2022: The Dallas Mavericks are building a familiar formula around Luka Doncic 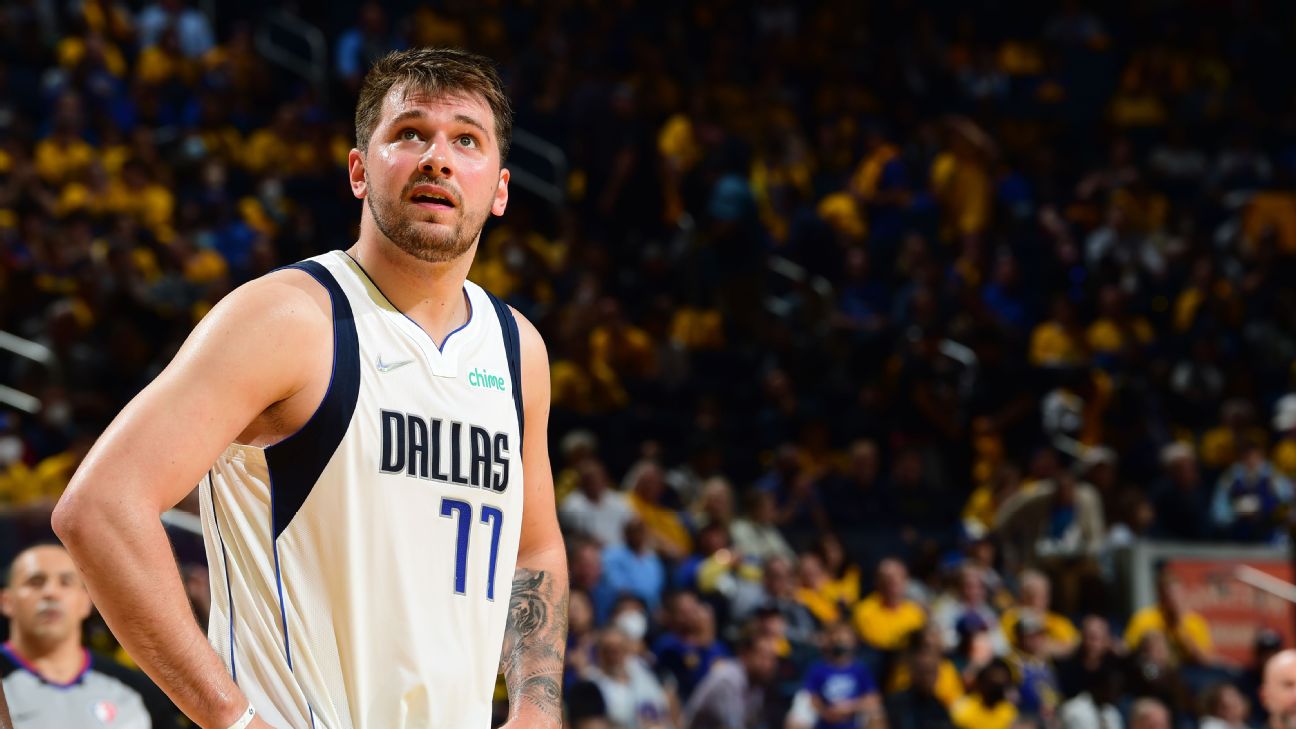 NOBODY IN THE Dallas Mavericks' front office exchanged high-fives after details were finalized on the deal made minutes before the Feb. 10 trade deadline. The consensus in the room was that moving on from big man Kristaps Porzingis was in the best interest of the franchise, but it wasn't a cause for celebration.

Porzingis, after all, had been acquired in a blockbuster deal two years earlier to pair with Luka Doncic as the franchise's foundational pieces. Porzingis was supposed to be the co-star the Mavericks and their 23-year-old superstar needed to help form a long-term contender.


But Dallas, led by new general manager Nico Harrison and first-year coach Jason Kidd, eventually came to the realization that Porzingis, when he wasn't injured, provided clutter for Doncic instead of the space he needed to operate. The team determined Porzingis wasn't a fit alongside Doncic, and he wasn't going to be the ticket to one in a trade.

So the Mavs broke Porzingis' maximum salary into two smaller ones the Washington Wizards wanted to shed, bringing Spencer Dinwiddie and Davis Bertans to Dallas, citing flexibility and depth as reasons the trade made sense. Dallas didn't anticipate taking a step back because of the trade -- the Mavs had a better record without Porzingis than with him -- and hoped Dinwiddie and Bertans would benefit from a change of scenery and provide scoring punch to the bench, but it certainly wasn't considered to be a win-now move.

Mostly, it signified a return to square one in the team's yearslong search for a star sidekick for Doncic. And it introduced another question: Did the Mavs need to follow the modern NBA trend of having multiple stars to contend?

"You always want talent to win championships," Kidd said after Dallas defeated the LA Clippers behind a career-high 51 points from Doncic on the night of the trade deadline. "As we go through this journey, we'll see if we come across a No. 2 guy.

"It could be the team that we have where there is no real second star. You've just got guys who play roles at a very high level. And you've seen teams win championships that way, too."

The last title team to fit that mold? The 2010-11 Mavericks, when a 38-year-old Kidd was one of several role players who complemented Dirk Nowitzki so well.

"You had one superstar and the rest were burgers," Kidd said that night with a smile, using Nowitzki's favorite playful insult that became a term of endearment.

Now, in the wake of a surprising run to the Western Conference finals that ended with a gentleman's sweep against the Golden State Warriors, the Mavs' brain trust must determine how these playoffs should influence the process of constructing a championship roster around their prodigy. Winning two rounds and eliminating the No. 1-seeded Phoenix Suns gives some credence to the belief that the Mavs can contend with a lone superstar.

"This year, we made a huge step, maybe a couple of steps," Doncic said after the Mavs were eliminated with a 120-110 loss in Thursday's Game 5. "Obviously, there is a lot to do, but we made a huge step and I think we're on a great, great path."

JALEN BRUNSON'S FIRST reaction to the Porzingis trade was to figure out whether he was part of it. There had been rampant discussion around the league that the Mavs would attempt to get value for Brunson in the trade market instead of leaping into the luxury tax by re-signing him as an unrestricted free agent this summer.

The price to do so has since gone up significantly after the 25-year-old guard played a major role in Dallas' playoff run. He averaged 21.6 points per game in the postseason, highlighted by 41- and 31-point performances in a pair of first-round victories over the Utah Jazz while Doncic sat out because of a strained calf.

Mavs governor Mark Cuban, who last dipped into the luxury tax for that title team 11 years ago, has been adamant he will pay what it takes to keep Brunson in Dallas. If not, the Mavs wouldn't have any salary-cap room to sign a replacement for their second-highest scorer.


"The whole co-star talk, I don't really think about it. It is what it is," Brunson told ESPN. "It can be anyone any given night. Obviously, I want to put my team in position to win, but having that mindset of being the co-star is going to give me expectations that I don't really need personally. I want to be a significant piece on a championship team."

Brunson, a 2018 second-round pick who has grown comfortable playing on or off the ball, is one of a few homegrown developmental success stories who have adapted to become great fits with the ball-dominant Doncic. Dorian Finney-Smith and Maxi Kleber, in particular, have developed into excellent 3-and-D players whose moods don't waver depending on how often they touch the ball on offense. Reggie Bullock, who was signed with the midlevel exception, is a similar type of player and part of the Mavs' core.

Doncic has led the league in usage rate the past two seasons -- he bumped it to historic highs this postseason -- and gets targeted defensively by opponents, both because that's often the best way to attack the Dallas defense and a method for wearing down a superstar who has had to play his way into shape the past two seasons.

It's a must for the Mavs to surround Doncic with role players who provide him space offensively and protection defensively. If anything, the Mavs had to rely too much on Bullock and Finney-Smith, who rank first and second in the league in minutes this postseason. They're asked to take on the toughest defensive assignments every game, and they have to fight off fatigue from playing 40-plus minutes to make open shots to keep the Mavs' offense humming.

The return of a healthy Tim Hardaway Jr., who missed much of the season and the entire playoff run due to left foot surgery, would provide more scoring punch. But dependable wing depth -- in the form of a shooter who is a solid defender -- is a need entering the summer.

So is an upgrade at center, where Kleber played the majority of the minutes in the playoffs despite being a backup to Dwight Powell.

"They're one player away," an Eastern Conference executive told ESPN, suggesting the Mavs could win a title as soon as next season if they figured out a way to add an impact center -- in the mold of 2010-11 Tyson Chandler -- who could be a primary Doncic pick-and-roll partner, rebounder and rim protector.

It's an opinion shared by several other rival coaches, scouts and executives who have recently discussed Dallas' outlook with ESPN.

Cuban also believes this kind of roster construction -- with some upgrades -- can set the Mavs up to be long-term contenders.

"We see what we need," Cuban said in the wake of the Warriors' closeout win. "When one of their guys is getting 17, 18 rebounds a night, it kind of tells the story. That's one of the things that we'll try to fix."

The players on the Mavs' roster don't believe drastic moves need to be made for the franchise to win a championship.

"We've definitely got enough in this locker room to do something special," Finney-Smith told ESPN during the conference finals. "We're here. We're a top-four team in the NBA. You can try to find another star, but you never know how that's going to mesh with Luka or the other personnel. It's an adjustment to play with somebody like Luka, too, and I feel like [Brunson] adjusted well and [Dinwiddie], too.

CUBAN HAS LONG made pursuing a star a priority. It's why he didn't keep an aging roster intact after the franchise's lone title, opting to instead create salary-cap space in hopes of signing Chris Paul or Dwight Howard or other big names who didn't end up in Dallas -- or, in the case of Deron Williams, signed with the Mavs after his star had faded.

It's why the Mavs pushed their chips to the middle to trade for Porzingis midway through Doncic's rookie season. Dallas also had pipe dreams of pairing Doncic with Giannis Antetokounmpo, but those evaporated when Antetokounmpo signed a contract extension with the Milwaukee Bucks and then led his franchise to a championship last season.

It's also one reason why Cuban hired Harrison, the former longtime Nike executive who has strong relationships with players and agents throughout the league, as the Mavs' new general manager last summer.

However, at this point, the Mavs don't have a clear path to even making a pitch for another star. Dallas wasted the flexibility of having Doncic on a rookie contract, failing to make a splash in free agency over the past few years, and his supermax extension kicks in this summer. They also still owe a 2023 first-round pick to the New York Knicks, limiting their assets in the trade market.

The Mavs could benefit at some point from the NBA trend of disgruntled stars forcing their way to certain contenders via trade. Doncic has certainly proven that he lives in the league's elite stratosphere. But he doesn't have deep-rooted relationships with stars from around the league, typically formed as teenagers and/or on Team USA. And Doncic's playing style might not be attractive to other stars accustomed to frequently having the ball in their hands.

These Mavs, meanwhile, emerged as contenders with Doncic and a cast of high-caliber complementary pieces who embraced their roles. They live in Luka's world and have learned to thrive in it.

"The main challenge is probably ego," Brunson said. "When a person has the ball in his hands for that long, people can get upset. People want the ball or people say they need a rhythm. I learned how I need to play without a rhythm. I don't need a rhythm. It's Luka Doncic. S---'s not changing. It's Luka Doncic. I've come to the conclusion that he's an amazing player, he's going to do a lot great things and this organization is going to build around him. I've grown into the mindset of, how can I fit that mold? How can I be successful in my role or in whatever role they want me to be in?

"Certain guys have that aura about them. It's not whatever they say goes, but it's revolving around them - and rightfully so."

As far as Cuban is concerned, the Mavs "without question" established an identity in the first season of Kidd's tenure that gives the franchise a chance to grow into champions.

"Hard-playing, physical, multitalented," Cuban said, listing off the distinctive traits of players on the Dallas roster. He continued, "Being able to complement Luka, knowing how to play with Luka. That probably is No. 1." 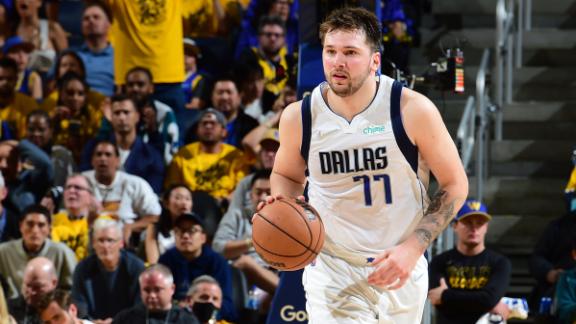