Next up: Pegulas need NFL approval 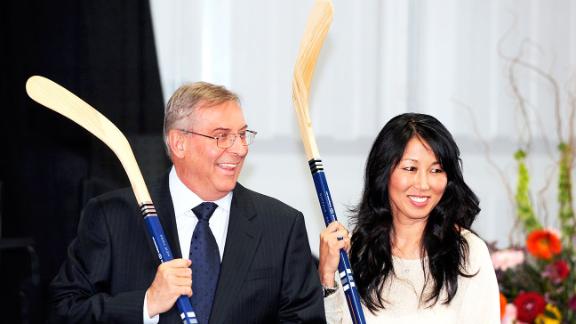 And with that, it seems as if Bills fans can breathe a sigh of relief, as the Pegulas stressedtheir intention to keep the Bills in Buffalo in a statement posted on the Sabres' website.

"Our interest in owning the Bills has everything to do with the people of Western New York and our passion for football. We have knowledgeable, dedicated fans here and along with our ownership of the Buffalo Sabres, it is gratifying to reassure these great fans that two franchises so important to our region are both here to stay."

The definitive agreement calls for the Pegula family to acquire all of the interest in the Bills franchise from the trust of late owner Ralph Wilson, according to a statement from the Bills. Now, NFL owners must approve the sale. The Bills and the Pegulas intend to submit the agreement for that approval at the owners meeting on Oct. 8.

"This is a very important day in the history of the Buffalo Bills franchise," Bills controlling owner Mary Wilson said in the statement. "Ralph brought professional football to Buffalo in 1959 and it was his life's passion. He loved his team and he cherished the fans and his legacy will remain for all-time. Ralph would have been pleased with the sale of the team to the Terry Pegula family, who has been so committed to Buffalo and the Western New York region.

"I sincerely wish Terry and Kim Pegula all the best with the Buffalo Bills and I'm happy for all Bills fans. Our hope is that this great franchise brings them as much excitement and joy as it did for Ralph and that they bring home a Super Bowl championship for Bills fans everywhere. Go Bills!"

The development comes a day after the Pegulas were among at least three prospective ownership groups to submit binding bids to purchase the team.

The other groups to submit bids were one led by New York City real estate mogul Donald Trump and a Toronto group fronted by rocker Jon Bon Jovi.

The Pegulas have been regarded as front-runners to buy the Bills since first expressing interest in May. They made Buffalo their adopted home after buying the Sabres in 2011. They have a net worth of more than $3.5 billion and the support of local business leaders and public officials because of their commitment to keep the Bills in western New York.

In addition to approval from three-quarters of the league's 31 other owners, the Pegulas will also have to go through an extensive background check by an NFL-contracted security firm.

Under NFL ownership rules, the Pegulas are allowed to own both the Bills and the Sabres because the franchises are in the same market.

The Bills were up for sale after Wilson, a Hall of Famer who founded the franchise, died in March. The franchise was last valued by Forbes at $935 million. But the sale price is expected to exceed $1 billion because NFL franchises rarely go on the block.

The Cleveland Browns were sold for close to $1.05 billion two years ago. The Miami Dolphins sold for an NFL-record $1.1 billion in 2009, but that deal also included their stadium.

U.S. Sen. Charles Schumer has been involved with the sale process to ensure the Bills stay in New York. Last week, Schumer expressed support of the Pegulas to at least 10 NFL owners.

During a stop in Buffalo on Monday, Schumer said he had conversations that day with both Terry Pegula and NFL commissioner Roger Goodell.

"We talked about the lay of the land," Schumer said. "I'm not going to get into details, but I believe that [Pegula] is enthusiastic about owning and keeping the Bills in Buffalo for generations."

Under a lease agreement reached in December 2012 with New York State and Erie County, the Bills are essentially bound to Ralph Wilson Stadium through the end of the 2019 season. There is a one-time out clause that would allow the team to break the agreement for just under $28.4 million in 2020.

The Pegulas have built a privately financed $172 million downtown hockey-entertainment complex called HarborCenter. Two people familiar with discussions have told the Associated Press the Pegulas have had discussions regarding the building of a downtown football stadium.

Trump maintained his interest and had the deep pockets to buy the Bills, but he lost out once the price rose beyond what he considered reasonable.

Bon Jovi's group failed to address wide concern about plans to potentially relocate the franchise to Canada. The Toronto group was rounded out by Larry Tanenbaum, chairman of Maple Leaf Sports and Entertainment, and the Rogers family, which controls Rogers Communications.

In a letter to The Buffalo News last month, Bon Jovi outlined his objective "to carry on the legacy of Ralph Wilson and make the Bills successful in Buffalo." At no point, however, did he mention his Toronto partners or state a long-term commitment to keeping the team in Buffalo. The backlash grew so large that numerous Buffalo radio stations and bars stopped playing Bon Jovi's songs.

Information from ESPN NFL Insider Adam Schefter and The Associated Press is included in this report.