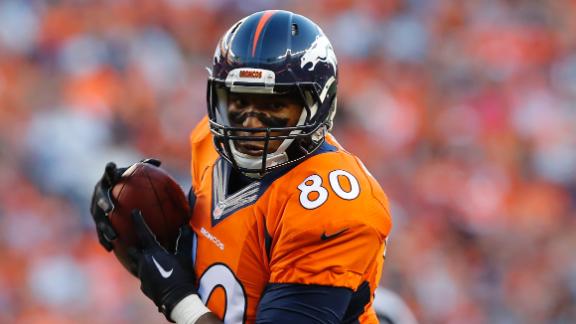 ESPN
By Josh Weinfuss
TEMPE, Ariz. -- A day after his star defensive lineman was sidelined with an MCL strain because of a chop-block, Arizona Cardinals coach Bruce Arians said he believes Denver's illegal hit on Calais Campbell was deliberate.

"You'll never convince me it wasn't premeditated," Arians said Monday. "The one guy set him up."

Broncos coach John Fox denied the hit by tight end Julius Thomas, who was flagged in the third quarter for chop-blocking Campbell, was intentional. Even though he suffered no structural damage, Campbell could miss up to three weeks.

"Cut-blocking is allowed in the National Football League. It is utilized by everybody in the league, but you cannot have the tackle engage and cut block at the same time," Fox said Monday. "But that in no way was intentional, never been coached by me or anybody on my staff or any player we have on our football team. ... I believe that's our first chop-block called in our tenure here in our four years. It was a look we had not seen much of."

Denver's most recent chop-block penalty was in 2010, a year before Fox arrived.

After Sunday's 41-20 loss, Arians said it was the dirtiest play he's seen in 37 years of coaching. A day later, he said he hasn't seen a lower chop-block in a while and hasn't ever seen the hit executed like Denver did Sunday. His frustration continued to show during his Monday news conference. He believes Thomas should be benched until Campbell returns, though he knows that won't happen.

"The main thing is there was no intention for anybody to be hurt on the play, and hopefully he'll be back soon," Thomas said.

On Monday morning, the NFL said the officiating crew in Denver made the right call.

On the play, Campbell was rushing off the right edge, and Broncos left tackle Ryan Clady stood in a pass block stance but had yet to make contact with Campbell. At the snap, Thomas, who was lined up next to Clady, dove into Campbell's knees for the chop, which caused the injury and forced Campbell to miss most of the second half.

"The play was penalized because it was an illegal chop-block, a violation of Rule 12, Section 2, Article 3 items c) and d)," NFL spokesman Michael Signora said. "The officials threw the flag for the 'reverse chop.' Thomas blocked Campbell 'in the area of the thigh or lower,' as specified by rule, and Clady engaged Campbell high 'simultaneously or immediately after the block' by Thomas, resulting in the penalty.

Signora said a decision to fine Thomas could come later this week.

Fox said he spoke to Arians after the game.

"Calais was lined up at end, and he spends most of his time down inside. It was a three-man rush that we didn't communicate as well as we'd like," Fox said. "I never like to see any player injured ... it costs us a 77-yard touchdown, so we're not coaching that."

Cardinals linebacker Larry Foote believed the chop-block was planned, given how Thomas continued his route after the hit. Foote said when he talked to Thomas on the field, Thomas said he thought it was a run play.

"Everybody -- current players, ex-players -- should be disgusted with that play," Foote said. "I heard commentators trying to mock B.A., but show me a play that's dirtier? There's nothing that's going to be dirtier. Maybe you can match it, but [it] ain't going to be more dirty. I'm waiting to see what the league does because that looked like Karate Kid -- 'Sweep the leg, Johnny.' It was ugly. That's a black eye to football. Period. Even their players know it."

Foote doesn't feel a fine is enough of a punishment.

"That hurt the shield," Foote said. "They talking about protect the shield. That ain't protecting the shield if you just going to slap a little fine on them."

The Cardinals lost seven players to injury in Sunday's loss, and one of them -- starting outside linebacker Matt Shaughnessy -- will go on injured reserve designated to return. Shaughnessy, who has knee cartilage damage, cannot play in a game for eight weeks, which means he could come back for the final four games of the season.

ESPN.com Broncos reporter Jeff Legwold and The Associated Press contributed to this report.