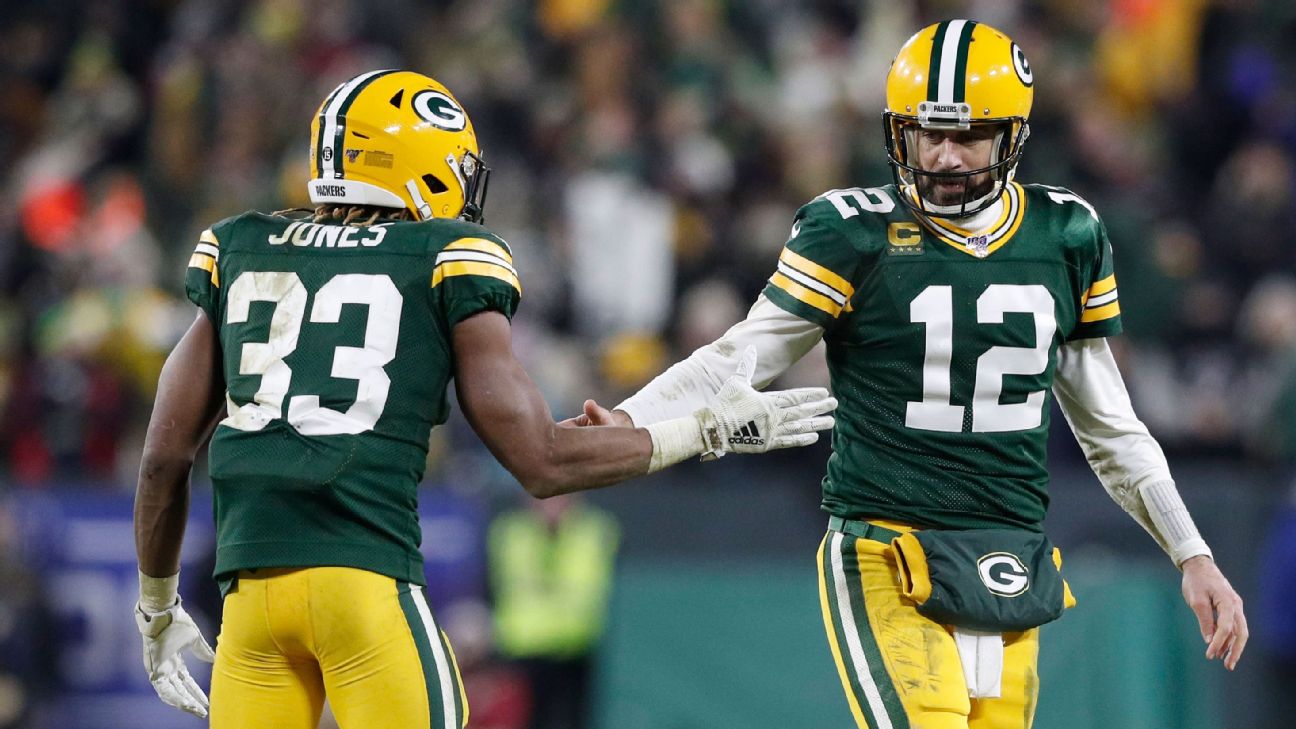 The conference championships of the NFL playoffs have arrived, and we're previewing Sunday's pair of games: Titans-Chiefs in the AFC, and Packers-49ers in the NFC. Our NFL Nation reporters bring us the keys to every game, a bold prediction for each matchup and final score predictions.

Additionally, ESPN Stats & Information provides a stat to know for each game, and the Football Power Index (FPI) goes inside the numbers with a matchup rating (on a scale of 1 to 100) and a game projection. NFL analyst Matt Bowen identifies a key matchup to watch, ESPN Chalk's Mackenzie Kraemer hands out helpful nuggets, and national NFL writer Kevin Seifert focuses in on each game's officiating crew. It's all here to help get you ready for an exciting weekend of NFL football.

What to watch for: While Niners coach Kyle Shanahan has expressed his team's need to forget the 49ers' 37-8 drubbing of the Packers in November, Packers coach Matt LaFleur has talked about needing to revisit and learn from it. The Niners are healthier than they were in that first meeting, but a regular-season drubbing guarantees nothing in the playoffs. According to the Elias Sports Bureau, this marks the 37th time in the Super Bowl era that two teams will meet in the playoffs after one beat the other by at least 25 points during the regular season. The team that won the first meeting is 22-14 in the ensuing matchup, but the team that best maintains focus on the task at hand will move on to the Super Bowl. -- Nick Wagoner

Bold prediction: Packers receiver Davante Adams will come close to the team playoff record of 160 yards receiving he set last week against the Seahawks. Quarterback Aaron Rodgers was 0-of-8 on throws 10-plus yards downfield against the San Francisco defense in the Week 12 loss -- his most such passes in a game without a single completion, according to ESPN Stats & Information. Look for that to change Sunday as he and LaFleur devise different ways to attack the 49ers. -- Rob Demovsky

Stat to know: Both teams added a pair of pass-rushers this offseason. The Packers' Za'Darius Smith and Preston Smith were the only pair of teammates with 12.0 sacks each in the regular season, and they each had 2.0 in the divisional-round game. The 49ers, meanwhile, have recorded a sack on 17.3% of dropbacks with both Nick Bosa and Dee Ford on the field and just 5.7% with either or both off. The NFL average sack rate is 6.5%.

Key matchup: 49ers' pass rush vs. the Packers' offensive line. The 49ers are loaded on the defensive line with Bosa, Ford, Arik Armstead and DeForest Buckner. That's the best nickel front in the NFL. Look for San Francisco defensive coordinator Robert Saleh to scheme pass-rush matchups with his personnel out of multiple fronts and alignments. That allows the 49ers to bump Bosa and Ford inside, or use twist stunts to open up rush lanes. The pressure here is on the Packers' offensive line to protect Rodgers. Read more.

Betting nugget: Green Bay is the fourth team to win at least 13 games during the regular season and then be an underdog of at least seven points in its conference title game. Each of the previous three won the game outright. This is the fourth time Rodgers has been an underdog of at least seven points, and he is 0-3 outright -- but 3-0 ATS -- in the previous three games. Read more.

Officiating nugget: Referee John Hussey's regular-season crew threw an average of 14.9 flags per game, fourth fewest in the NFL. His crew called the second-fewest penalties for offensive holding (38), one of the handful of fouls for which referees are responsible.

Matchup must-reads: How Jerry Rice yelling at Deion Sanders helped shape the 2019 49ers ... Nick Bosa's dominant rookie season not a surprise to the 49ers ... Former surfer Raheem Mostert riding the wave as 49ers' X factor ... How the Packers overhauled everything to get back to the NFC Championship Game ... Packers will take fine-tooth comb to loss vs. 49ers, Matt LaFleur says ... Which LaFleur -- Mike or Matt -- will join their parents at the Super Bowl? ... Davante Adams: Packers have 'a better way to attack' 49ers this time

What to watch for: Titans running back Derrick Henry isn't the only storyline in this game, but it sure seems like it after he ran for 188 yards against the Chiefs in Week 10. Doing much better this time is a big thing for the Chiefs, who are 9-0 when allowing the opponent to rush for 110 yards or fewer -- but 4-4 when allowing more. -- Adam Teicher

Bold prediction: All of the focus on stopping Henry will make the Chiefs' defense more vulnerable to the passing game. After totaling 160 yards in the previous two games, Tennessee quarterback Ryan Tannehill will capitalize on one-on-one coverage, throwing for 250 yards and two touchdowns. -- Turron Davenport

Stat to know: According to NFL Next Gen Stats, Chiefs wide receivers had 13 plays with the ball carrier reaching 20-plus mph this season, the most in the NFL. Tyreek Hill and Mecole Hardman both have six such plays, tied for the most among receivers in 2019. In addition, the Chiefs' wideouts have been open (3-plus yards of separation, per NFL Next Gen Stats) on 45.6% of their targets, the highest rate in the NFL.

Key matchup: Titans' deep-ball play-action vs. the Chiefs' secondary. Even if the Titans do control tempo with Henry, the Chiefs and quarterback Patrick Mahomes will still get eight or nine possessions. So the Titans need points in this one, and explosive-play opportunities off play-action offer an opportunity. Look for Tennessee to dial up some shot play throws for Tannehill here. Bring in your big-boy personnel, sell the run and push the ball over the top to Kalif Raymond or A.J. Brown. Read more.

Betting nugget: Sunday will be the fifth time this season that Tennessee has been an underdog of at least four points. It won each of the first four outright, including beating Kansas City in Week 10. Tennessee is also the fifth team to win its wild-card and divisional-round games as underdogs of at least four points. But the previous four teams were 0-4 outright and 1-3 against the spread (ATS) in the conference title games. Read more.

Officiating nugget: Referee Tony Corrente will get another shot after an eventful wild-card game in Houston, where he had to be talked out of awarding a fraudulent touchdown to the Bills. Corrente's regular-season crew threw an average of 17.1 flags per game, the fifth most in the NFL.

Matchup must-reads: The first $40 million-a-year QB? NFL execs predict Mahomes' potential payday ... One of Andy Reid's biggest wins -- but is the best still yet to come? ... Fortune favors the bold: QB wasn't a need when Chiefs drafted Patrick Mahomes ... Chiefs sound drained at mere prospect of facing Derrick Henry again ... Damien Williams at long last establishes himself in Chiefs backfield ... From Dolphins discard to Titans treasure, Ryan Tannehill had 'to move on' ... How two trades helped catapult the Titans to the AFC title game ... How the Titans pulled the stunner to beat Lamar Jackson, and what's next ... Lessons from baseball helped Titans' A.J. Brown blossom at football 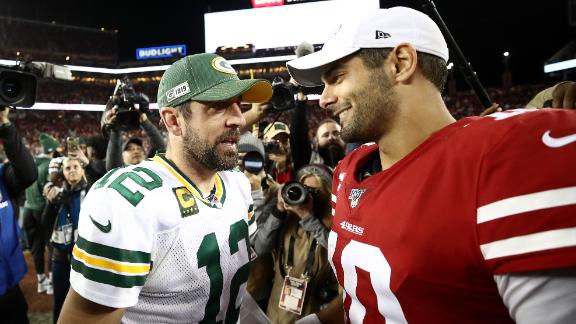 Packers vs. 49ers (-8)
San Francisco's defense and rushing attack look to dominate the underdog Packers and keep Aaron Rodgers off the field. 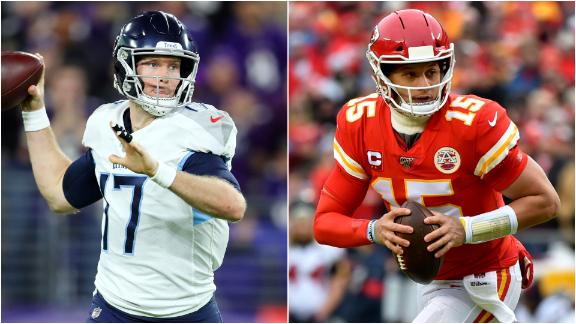 Titans vs. Chiefs (-7)
Tennessee is 4-0 ATS and SU this season as an underdog of 4+ points, but Kansas City has won and covered seven straight. 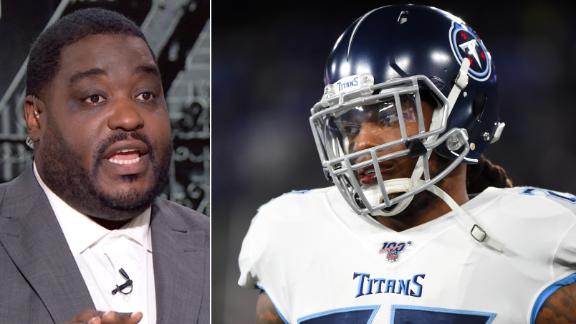