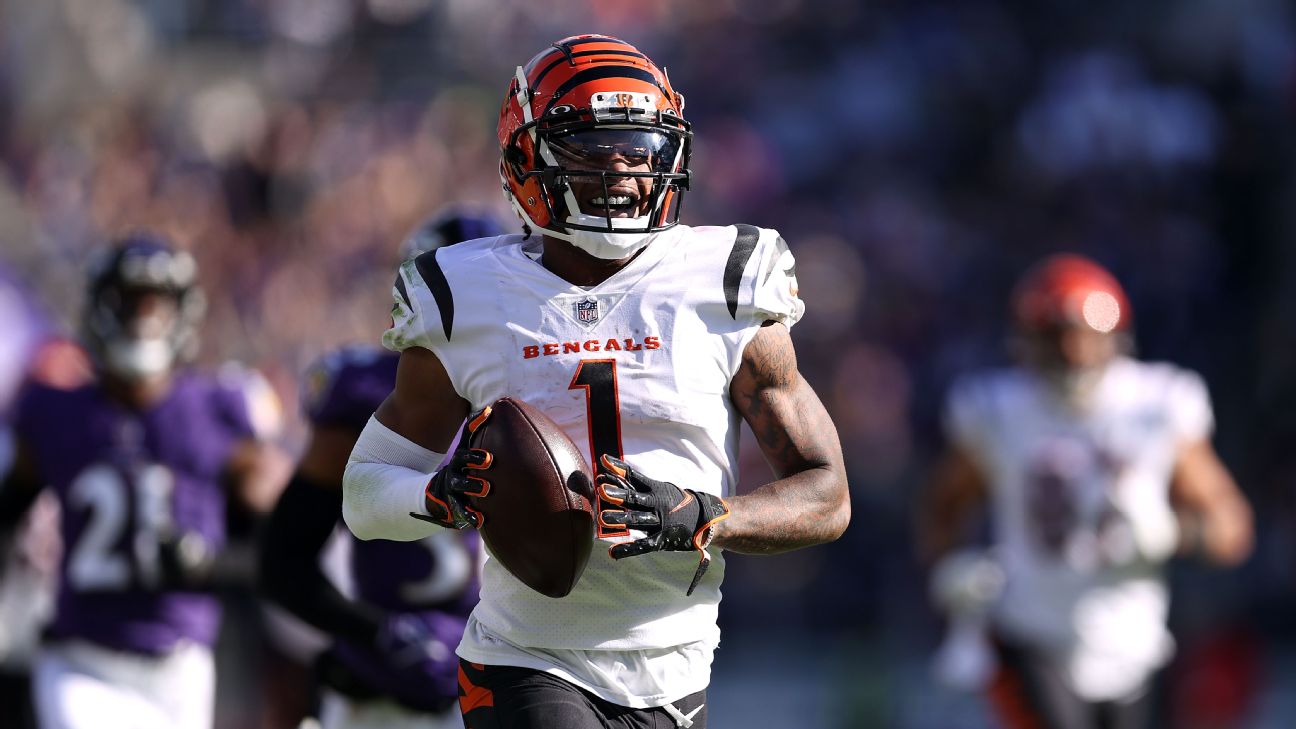 We're seven weeks into the 2021 NFL season, and the first-year cornerbacks continue to flex their collective muscles. Three of them make the second edition of our rookie rankings. And while our top 10 has some movement, once again only one quarterback made the cut. It's actually a pass-catcher atop the board here, as the Bengals'Ja'Marr Chase has launched himself to the head of the class as the season's halfway point approaches. That shouldn't surprise anyone -- he's setting records for rookie receivers and seems to have a deep-ball TD every week.

To build the list, we polled some personnel executives around the league and worked our way through the game tape. We also include who just missed the list and a few other names to keep handy in the coming weeks. Finally, we looked to ESPN Stats & Information's Seth Walder to name an under-the-radar rookie to keep an eye on and ESPN Chalk's Doug Kezirian to provide the best value bets for Rookie of the Year.


So who are the top rookies in the NFL right now, and why are they excelling? Let's cut to the Chase, pun intended.

Under the radar | Value bets

Where to start? The 21-year-old leads the league in yards per catch (21.5), has three 100-yard games -- including a 200-yard outing -- and has the most receiving yards through seven career games in NFL history (754). Watch his routes and how he sets up more experienced defenders -- add the Ravens' Marlon Humphrey to what will be a growing list -- and it's clear this is a dynamic player who is going to require defenses to make a plan for him every weekend. And that means going beyond just putting their best cover player on him most of the time.

Lists like these are often about degree of difficulty, and Slater checks that box pretty rigorously. He hasalready faced the likes of Chase Young, Maxx Crosby and Myles Garrett in his first six starts. Garrett did overpower Slater for a sack in Week 5 -- though he may have gotten away with a hands-to-the-face penalty on the play -- but body of work is always what matters most, and Slater's body of work thus far is top shelf.

His versatility and the Cowboys' need to change his job description at the earliest stages of his NFL career will impact how some may see Parsons' success. The bottom line: He has made an impact at defensive end when the team needed him to play there -- he has 10 quarterback hits -- and he has shown the ability to work in coverage at linebacker, as well as hold his gap at the point of attack in the run game. Parsons leads all rookies in pass rush win rate at 26.2%.

Surtain has played 86% of the team's defensive snaps, been tasked with a handful of WR1s and played with such competitiveness from down to down that when Ronald Darby came off injured reserve, it was veteran Kyle Fuller who went to the bench. Surtain does need to clean up some of his tackling in the run game, but opposing quarterbacks have consistently been frustrated far more often than not when they've tried to test him.

Owusu-Koramoah may have difficulty holding on to this spot, given he went to injured reserve (ankle) on Oct. 18, missed the Browns' Week 7 win over the Broncos and is expected to miss several weeks. But just before his injury, which happened on Oct. 17 against the Cardinals, he had played 91% and 85% of the defensive snaps in his prior two games, as he consistently showed top-end play speed to the point of attack with quality work in coverage.

Jones has faced the highest degree of difficulty among the top 10 and showed the resolve to bounce back from his three-interception day in Week 3 against the Saints for seven touchdown passes and three interceptions over the next four games. He also got his first career 300-yard game in a blowout win over the Jets this past weekend. The game tape shows a little more progress each week in protecting himself in the pocket -- especially against the unnecessary sack -- and taking care of the ball.

Like one of his mentors -- Broncos coach Vic Fangio -- Chargers coach Brandon Staley wants competitive cornerbacks who can tackle and play with discipline in a variety of coverages. Samuel has been reliable much of the time and has shown the versatility to play in the slot or outside, depending on what is needed of him.

The Chiefs have a growing pile of trouble in some places on the depth chart, but Humphrey is not on that list. He has played with composure and keeps his footwork clean. The game film shows he has allowed just one sack in pass protection, and ESPN's metrics (via NFL Next Gen Stats) have him with just six pass-block losses on the season overall.

Personnel evaluators around the league expected Pitts to find his footing as the season moved toward the halfway mark. Consider it found. He has two 100-yard games over the past two weeks and a wide receiver-worthy 15.2 yards per catch on the season.

The former Illini defensive back finds his way into this spot because of the Raiders' expanding portfolio for him in recent weeks and his ability to consistently have an impact in each of those roles. Hobbs has five starts, has played at least 50% of the defensive snaps in every game -- including a season-high 93% in the Raiders' Week 7 win over the Eagles -- and has just one missed tackle on the year.

The second-round pick's 5.5 sacks lead all rookies, including the 2.5 he had against the Panthers this past Sunday. He has added some counters in his pass-rush work, and the more he progresses there, the more sack-happy games he will have. His 14.0% pass rush win rate is second among rookies to Dallas' Parsons.

His potential is still clear, but the move to left tackle to replace the injured Taylor Decker has impacted Sewell's quality of play overall, as he fights his way along the learning curve. After a choppy two-game stretch against Minnesota and Chicago, when he allowed four sacks, he rebounded with high-quality efforts against the Bengals and Rams.

Newsome missed two games with a calf injury -- Weeks 4 and 5 -- and played just 21 of the team's defensive snaps in Week 6. But he got the start and played all 50 defensive snaps against the Broncos this past Thursday. His play shows an attention to detail, and he has been flagged just once this season.

Williams, who has 320 rushing yards this season, is a broken-tackle festival waiting to happen. We saw it recently against the Ravens, when six different Baltimore players tried to tackle Williams before he eventually was pulled to the ground. He has shown potential in the passing game, as well, with 122 yards on 20 catches. The only quibble is on those rare occasions when he doesn't show his customary decisiveness.

Stokes has played every defensive snap in four of the Packers' past five games. He has been flagged three times this season -- all for pass interference -- but all three were in his first two starts. Stokes has an interception and eight passes defended.

The Chiefs crushed the offensive line portion of their draft; not only did they get the aforementioned Humphrey late in the second round, but they also nabbed Smith in the sixth out of Tennessee. Seven games in, Smith ranks 11th in both pass block win rate and run block win rate among guards this season. That's a lot of value for a late-round pick, and Smith -- along with Humphrey and veteran free-agent signing Joe Thuney -- makes the interior of the offensive line a real strength for Kansas City.

Cincinnati's Chase is rightfully receiving tons of attention and praise, but Pitts at +1400 feels like great value for Offensive Rookie of the Year. The main concern is that Chase and Pitts play similar positions, so their stats will be compared to one another, as opposed to how voters might compare a QB and receiver. However, we still have two full months remaining in the regular season, and it seems like Pitts is just now hitting his stride with back-to-back 100-yard games. 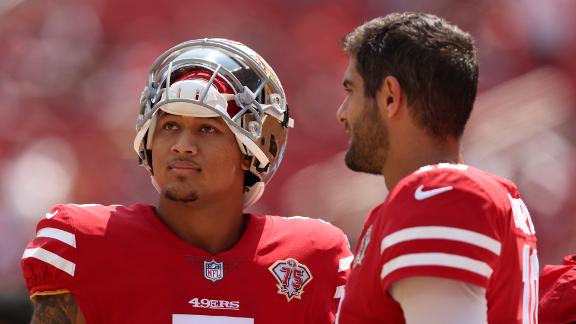