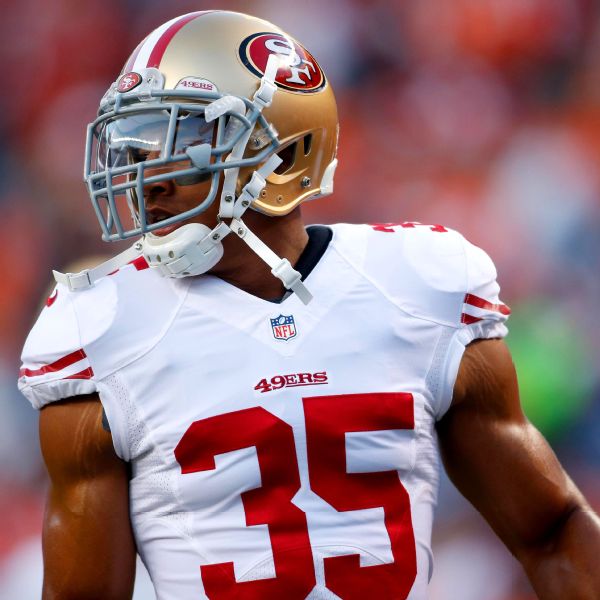 SANTA CLARA, Calif. -- Already down two starters at linebacker, the San Francisco 49ers will be without strong safety Eric Reid in Thursday's game against the Los Angeles Rams.

Niners coach Kyle Shanahan announced Monday evening that Reid suffered an injury to the posterior cruciate ligament in his left knee, would not be available to play against the Rams, and is likely to miss more time beyond that.

Reid suffered the injury with about five minutes left in the first half of Sunday's 12-9 loss to the Seattle Seahawks. While defending the deep middle of the field, Reid said he felt his cleat get caught in the turf and he felt his knee "wiggle" a bit.

After getting some tests done, X-rays showed no fractures, and Reid tested the knee before returning on Seattle's first possession of the third quarter. A handful of plays later, Reid left the game again before returning and then finally departing for good.

On Sunday, Reid said he wanted to finish the game, but eventually the Niners' medical staff shut him down after he came up limping for a third time. Shanahan said the Niners allowed Reid to keep playingbecause there was no evidence of a serious injury.

"They kept looking at his knee and didn't feel like there was anything torn, so he felt it was all right," Shanahan said. "I haven't got to talk to him personally yet so I'm not exactly sure, but when he got checked out it seemed all right. The X-ray that they have looked good and he said he could go, so he kept trying to go, and he had his final straw and they said he couldn't go anymore."

Reid played 52 of the Niners' 82 defensive snaps against the Seahawks, recording seven tackles.

Jaquiski Tartt, who started the game at free safety, took Reid's place and also suffered an injury. According to Shanahan, Tartt is dealing with a neck issue and his status for this week is up in the air.

"Right now, he's questionable," Shanahan said. "I know he was hurting today. We'll see how he is when he comes in tomorrow."

If Tartt is unable to play, the Niners would be thin at safety. Jimmie Ward, who took Tartt's spot at free safety after Tartt moved to Reid's position, is coming off a hamstring injury that kept him out since late July.

Besides Ward, the Niners' only other safeties on the roster are Lorenzo Jerome and Adrian Colbert, an undrafted rookie and a seventh-round pick in this year's draft, respectively. None of those three players has started an NFL game at safety, though Ward has started 18 games at cornerback and played safety in college

The 49ers previously lost linebacker Malcolm Smith to a season-ending pectoral injury, and Reuben Foster is in the second week of recovering from a high ankle sprain that's expected to keep him out for about a month.
Report a correction or typo
Related topics:
sportsespnsan francisco 49ersninersnfleric reid
Copyright © 2020 ESPN Internet Ventures. All rights reserved.
More Videos
From CNN Newsource affiliates
TOP STORIES
SF businesses, churches stressed after roll back to purple tier
UC application deadline extended after 'technical difficulties'