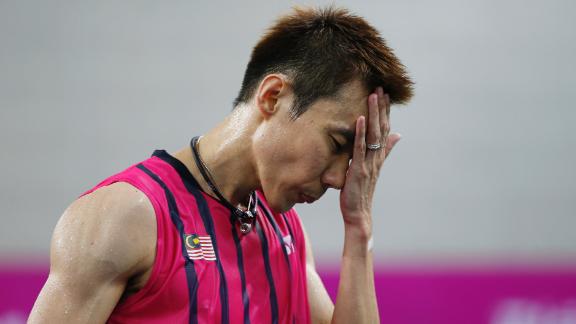 Lee, who has been temporarily suspended pending a hearing by the Badminton World Federation (BWF) doping panel, faces a potential two-year ban from competition.

Lee insisted he had "never cheated."

Badminton Association of Malaysia (BAM) deputy chairman Mohamad Norza Zakaria confirmed Saturday that a test carried out on Nov. 5 in Oslo, Norway, on the "B" sample of an unnamed player had backed up the positive finding of the "A" sample from a doping control at this year's World Championships in August.

Mohamad declined to identify the player. However, a senior Malaysian sports official confirmed to The Associated Press that it was 32-year-old Lee. The official did not give his name because he was not authorized to reveal Lee's identity to the media.

Mohamad said the player tested positive for the banned substance dexamethasone, but the association believed he was innocent.

"This player is a very dedicated player and an exceptional individual," he told a media conference. "We believe this player has never resorted to shortcuts to achieve success."

The Kuala Lumpur-based BWF would hear an expected challenge to the finding by Lee and BAM.

Lee, in comments released through a blog by his friend and sports blogger Satwant Singh Dhaliwal, said he was shocked and that he hoped to quickly clear his name.

Lee said the drug was last injected into him on July 18 for a thigh injury treatment, and that it was a "mystery" why it was found in his system after more than a month. Lee was beaten at the end of August by Chen Long of China in the final of the world championships in Copenhagen.

"I never cheated, nor will I ever rely on banned substances," Lee said. "I am a firm believer of hard work and effort to achieve success."

BWF president Poul-Erik Hoyer told the AP in a telephone interview on Saturday that he doubted there was "any systematic doping in badminton" but added he would "have preferred being without" this case.

Hoyer, a retired Danish badminton player who won major international singles titles in the 1990s, was speaking in Peru at an already planned meeting of the BWF.

"We know that when there is money involved in a sport -- and the money in badminton isn't very big -- there is always someone who wants to take shortcuts," Hoyer said.

Dexamethasone is on the World Anti-Doping Agency's prohibited list. Substances make that list if they meet any two of the following criteria: They have the potential to enhance sport performance; represent an actual or potential health risk to the athlete; or violate the spirit of sport.

He has also won four gold medals at the Commonwealth Games, including the men's singles at Melbourne 2006 and Delhi 2010.