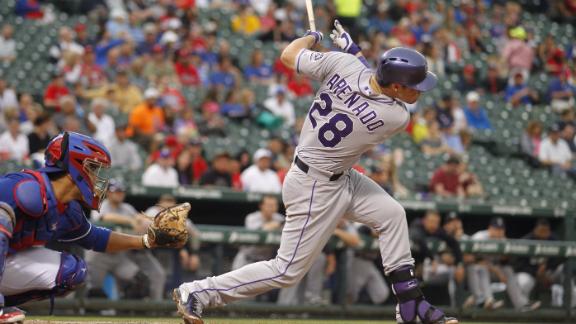 ARLINGTON, Texas -- Colorado Rockies third baseman Nolan Arenado broke the team record by stretching his hitting streak to 28 games in the Rockies' 5-0 loss to the Texas Rangers on Thursday night.

Arenado had a two-out single in the third inning. It was one of only five hits the Rockies had against Matt Harrison and four relievers.

"I was really more worried about winning," Arenado said. "Me having the mindset about me trying to help my team out and doing my job, I think that's what made me get it."

Arenado is halfway to Joe DiMaggio's major league record of 56 set in 1941.

The streak is one game longer than teammate Michael Cuddyer's 27-gamer last season.

Arenado's streak is the longest for anyone 23 or younger since Albert Pujols had a 30-game run in 2003 when he was 23.

The streak for Arenado began April 9, a week before his 23rd birthday.