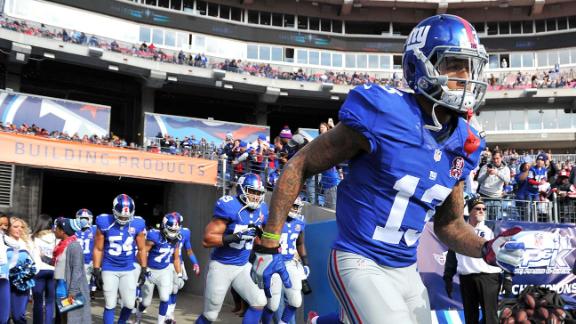 ESPN
By Dan Graziano
Odell Beckham Jr., the electrifying New York Giants rookie who packed a season's worth of top-wide-receiver stats into three-quarters of a season, will be rewarded with a trip to the Pro Bowl.

Beckham was named to the Pro Bowl roster Wednesday in place of Detroit Lions wide receiver Calvin Johnson, who will miss the game because of injury.

"It is definitely awesome," Beckham said in a statement released by the Giants. "It is something that means a lot to me, and I am definitely going to cherish the moment. I'm very excited to be going to the Pro Bowl.

"The goal [entering the season] is to be either in the Pro Bowl or the Super Bowl. That is every year. That is something you want to be able to build on and put that on your rsum. [We] didn't end up making it to the Super Bowl, but I did get the invite to the Pro Bowl, so I am very excited and blessed for the opportunity."

Beckham exploded onto the national consciousness in November with a nationally televised one-handed touchdown catch in a Sunday night loss to the Dallas Cowboys. And he stayed there as he piled up ridiculous numbers in the season's final weeks, helping deliver fantasy football championships around the world with his December performance. After missing all of training camp and the first four games of the season with a hamstring injury, Beckham finished with 91 catches for 1,305 yards and 12 touchdowns in only 12 games. His nine straight games with at least 90 receiving yards tied an NFL record set by Michael Irvin in 1995.

The No. 12 overall pick in the 2014 draft, Beckham is the first Giants rookie to reach the Pro Bowl since tight end Jeremy Shockey in 2002 and the first Giants wide receiver since Victor Cruz in 2012. This marks the 18th consecutive season in which the Giants have had at least one player in the Pro Bowl, although they needed Antrel Rolle to get in as an alternate last year and Beckham as an alternate this year in order to keep that streak alive.

The man Beckham is replacing, Johnson, caught Beckham's signature catch earlier this season and called it "the craziest I've seen ever, probably."

In 13 games this season, Johnson had 71 catches for 1,077 yards and eight touchdowns. He missed three games and was limited in two others with an ankle injury. He also missed last season's Pro Bowl after needing surgery for knee and finger injuries.