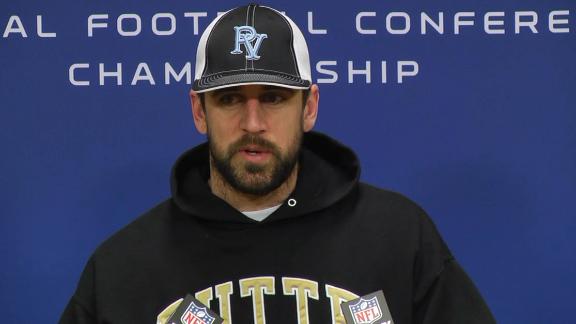 GREEN BAY, Wis. -- Aaron Rodgers did not want anyone to compare this to the Michael Jordan flu game in the 1997 NBA Finals, but the Green Bay Packers' quarterback said he has caught the illness that has made its way through some team members this week.

Rodgers sounded hoarse Friday during his final news conference before the NFC Championship Game against the Atlanta Falconson Sunday.

Earlier in the day, Packers coach Mike McCarthy said receiver Jordy Nelson, who is trying to return from broken ribs, stayed at home because he was sick. Kicker Mason Crosby did not practice on Wednesday because of an illness.

Rodgers said he plans to get plenty of "rest, fluids, all that stuff" between now and Sunday's game.

He was not listed on Friday's injury report.

Rodgers, a noted NBA fan, scoffed at a reference to Jordan's 38-point performance in Game 5 of the NBA Finals.

When a reporter prefaced a question by saying he did not want to turn this into the Jordan flu game, Rodgers replied: "Then don't."