Penguins' rookie, tenacious D among the biggest surprises of the Stanley Cup finals so far

ESPN
As the Stanley Cup finals shift west for Games 3 and 4, with the Pittsburgh Penguins holding a 2-0 series lead following their dramatic 2-1 win in overtime in Game 2 on Wednesday night, the San Jose Sharks find themselves in a tight spot. Only five teams in NHL history have come back from a 2-0 deficit in the finals to win the Cup.

The first two games have featured plenty of speed and skill on both sides -- as well as several surprises. Here are the four most unexpected developments so far.

Conor Sheary comes up big for Pens
The surprise wasn't that Conor Sheary scored the game-winning goal in overtime in Game 2. It was that the 23-year-old forward -- who started the season with Pittsburgh's AHL affiliate --showed zero signs of nervousness while playing on hockey's biggest stage alongside the game's best player.

Generously listed at 5-foot-9 and 175 pounds, Sheary 's not afraid to mix things up, and his speed and relentlessness have proved crucial -- to both his team and to his linemate, Sidney Crosby. Two games into the finals, this top unit has delivered two top-notch performances. Penguins coach Mike Sullivan, who coached Sheary in the AHL at start of the season, understands how significant Sheary's speed is to his Pittsburgh's success. When Sheary first was promoted from the AHL in December and inserted on Crosby's wing, it took the rookie a bit of time to get used to playing with the veteran. Sheary had a tendency to pass too often and not shoot. He has obviously figured it out -- and is proving to be one of the main reasons the Penguins are two wins shy of sinking the Sharks and hoisting the Stanley Cup. --Joe McDonald

If you would have told me that Martin Jones would start two games in goal for San Jose on the road in Pittsburgh and post a .930 save percentage in those starts, I would have felt good about projecting at least one win for the Sharks. So I think the biggest surprise of the series so far is that Jones is playing so well -- but the Sharks have absolutely nothing to show for it.

Going into this series, there were questions about how Jones -- who hadn't been tested consistently during San Jose's playoff run -- would respond to the pressure of making his first Stanley Cup finals start. (He didn't play in the finals with the Los Angeles Kings in 2014, but watched Jonathan Quick lead L.A. past the New York Rangers.) Jones has been a rock for the Sharks, making 38 saves in Game 1, but the Penguins peppered him with 41 shots that game, the highest shot total he'd seen in a game without overtime all season. Through two games in this series, Jones has faced 71 shots, 22 more than he saw in the first two games combined of the Western Conference finals.

"He's been great. He's been great all playoffs," said Logan Coutureafter Game 2. "He gives us a chance each night and it's up to us to find ways to score more goals and stop turning the puck over and make him work so much."

Jones has shown up in a big way for the Sharks. Now he just needs a little assistance from his teammates or this series will be over in a hurry. -- Craig Custance

Pens' blueliners keep Sharks at bay
No question, the most surprising development so far has been San Jose's inability to expose Pittsburgh's blue-line corps.

After all, you're talking about a Sharks team that went through the NHL's top defense -- Nashville'sRoman Josi, Shea Weber, Mattias Ekholm and Ryan Ellis-- a top four that has no parallel in the league. Then, in the Western Conference finals, the Sharks got the upper hand on a talentedSt. Louis Bluestop four that included Alex Pietrangelo, Jay Bouwmeester, Colton Parayko and Kevin Shattenkirk. And so, as the Cup finals approached, and you considered the evidence just laid out, as well as the fact that after the great Kris Letang and the injured Trevor Daley,the Penguins' blue line thatthins out in a hurry, at least in name value. After all, Justin Schultz played his way out of Edmonton. I repeat, Edmonton, where the Oilers are screaming for blue-line help. But here he is looking just fine, thank you, in a Penguins uniform. With each and every playoff game,Brian Dumoulin, who is averaging more than 21 minutes a night,looks more and more like the real deal. Ben Lovejoy is arguably playing the best hockey of his career. Olli Maatta is having a better stretch after some struggles recently. The serviceable Ian Cole has been just that.

Still, when you consider the high-end quality of the Predators and Blues blue-lines, and how the Sharks won those battles with their cycle and forecheck, the Penguins' blue-line screamed matchup heaven for San Jose. The problem is that you need to have the puck to impose your will that way. And Pittsburgh's speed through two games has hemmed San Jose its own zone. If you're the Penguins, there's no better way to protect your weakest areathan to make sure you spend most of the night in the opposite zone. -- Pierre LeBrun

For me, the surprise of the first two games has been the lack of production from San Jose's big guns. We saw the Sharks impose their will on the Blues in the Western Conference finals and before that against Nashville and Los Angeles. San Jose boasts the top three postseason point-producers in Logan Couture, Joe Pavelski and Brent Burns.

Leading up to the finals, whenever the Sharks needed a big play this postseason, one of the big three -- and you can throw Joe Thornton into the mix to make it an even foursome of production -- provided it. Those four stars have collected an incredible 88 points between them so far. But after two finals games, both decided by one goal, the big four Sharks have scored zero goals.

Burns acknowledged after Game 1 that they each might have had a sense of awe at finally reaching the Stanley Cup finals, but that moment has come and gone. Or it should have. Sharks coach Pete DeBoer tersely dismissed the idea that his big stars were, well, star-struck, after Game 2. "Those guys don't have experience? Next question," DeBoer said.

The reality is, though, star-struck or not, if the Sharks' big boys don't get going in a hurry, San Jose's first trip to the Stanley Cup finals will be a painfully brief one.-- Scott Burnside 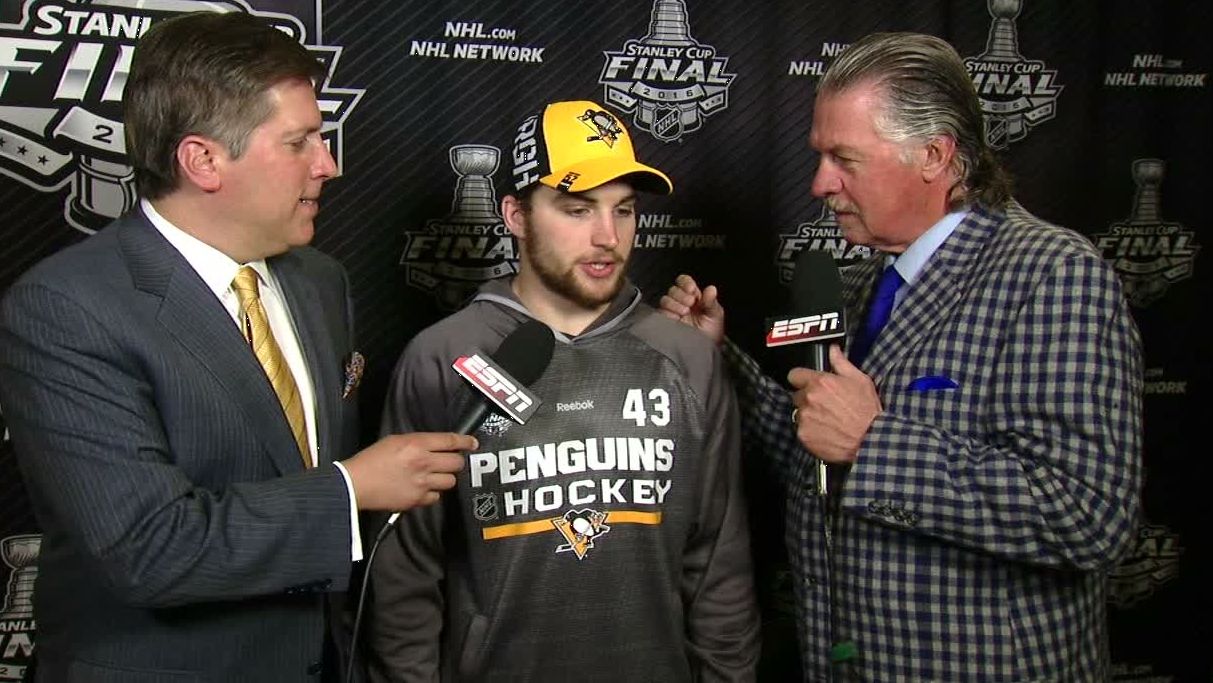