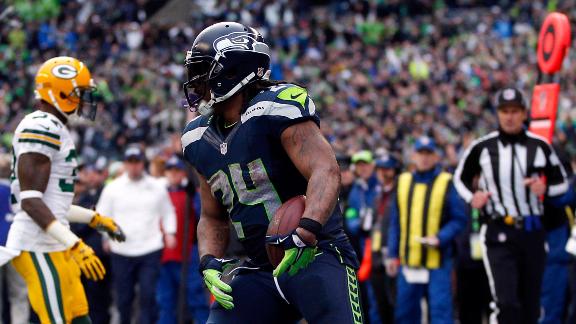 PHOENIX -- Seattle Seahawks coach Pete Carroll said he plans to talk to running back Marshawn Lynch about NFL officials saying the team will be penalized 15 yardsin the Super Bowl if Lynch does his obscene gesture after a touchdown.

"I haven't talked to him yet about the thing that came up with the league, but that will be addressed," Carroll said Sunday when the team arrived in Arizona. "I think he's going to have a great Super Bowl week and have a great time doing this and playing in this game."

The league has fined Lynch twice this season for obscene gestures after touchdown runs, including $20,000 for a gesture after his 24-yard touchdown in the NFC Championship Game against the Green Bay Packers.

Lynch also was fined $100,000 earlier this year for not talking to reporters. He did not speak after the NFC title game, and no one knows what he will do this week when he's required to talk to reporters.

Carroll came to Lynch's defense in his media session at the Arizona Grand Resort on Sunday.

"He's also a very private person, too. That's part of the media thing. He's not going to express a whole lot to you. I've said before that there's a great deal spoken in his silence as well."

Carroll is confident everything will go well for Lynch this week and in the game against the New England Patriots.

"It's something that he really cherishes and he cherishes playing for his teammates," Carroll said. "We love him. We always celebrate the uniqueness of our players in a way that allows them to play at their best."

Lynch Fined $20K For Obscene Gesture
Adam Schefter reacts to the news that Seahawks RB Marshawn Lynch has been fined $20,000 for an obscene gesture after scoring a touchdown in the NFC Championship Game.