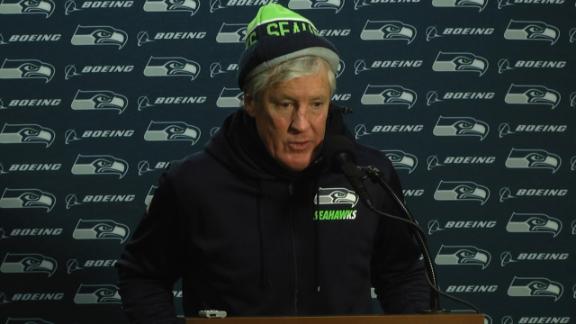 MINNEAPOLIS -- Marshawn Lynch benched himself for his team's NFC wild-card game Sunday against the Minnesota Vikings, according to Seattle Seahawks coach Pete Carroll.

Carroll, commenting for the first time on the latest twist in Lynch's injury saga, said Sunday that the mercurial running back opted not to play in the wild-card game because "he just didn't feel like he had it."

Lynch, who underwent abdominal surgery Nov. 25 and hasn't played since Nov. 15, decided late Friday after a full week of practice that he wasn't able to play, said Carroll, who sounded caught off-guard.

"We finished practice [on Friday], and I went right to you guys, to talk to the media, just going on what I had seen," Carroll said after his team's10-9 win over the Vikings. "But when he went back to his locker and sat down, he just didn't feel it. He didn't feel like he could go, and that's it. He just didn't feel like he had it. There wasn't enough time to build the confidence that he needed to come in and do something."

The Seahawks boarded buses and left Lynch behind when they flew to Minneapolis on Friday. Earlier that day, Carroll said in a radio interview that he expected Lynch to play.

Carroll said Sunday that he has no idea if Lynch will play against the Carolina Panthersin the divisional round.

The Seahawks, 8-2 without Lynch, relied once again on Christine Michael, who rushed for a team-high 70 yards on 21 carries in the win over the Vikings.

"I thought he did really well," Carroll said. "I thought he ran hard all day long. ... He ran tough, and he looked like a pro, a real pro playing football."