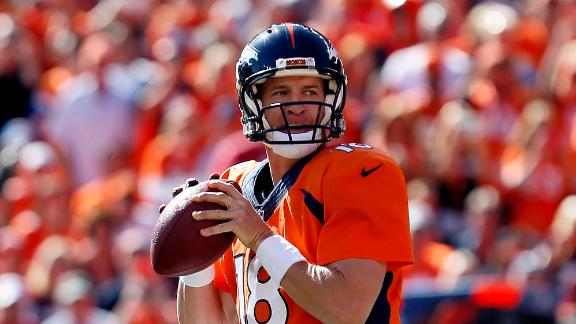 ESPN
By Jeff Legwold
DENVER -- The previous time Julius Thomas caught a slice of history, he tossed the ball aside before being told it would be a good idea to retrieve a record-setting touchdown ball from Peyton Manning.

Thomas made a mental note then, and when he caught Manning's 500th career touchdown pass to close out the Denver Broncos' opening drive Sunday, he held it close before handing the ball off to the team's equipment staff.

"This time I remembered," said Thomas, who also caught Manning's record-setting 51st touchdown pass of the 2013 season. "This time, no way was I going to forget. I'm just fortunate to have been on the receiving end to the kind of plays people will remember about Peyton Manning."

These days, Manning seems to reach another "remember when" threshold each time he throws a pass. And when he tossed the 7-yard scoring pass to Thomas with 4 minutes, 43 seconds left in the first quarter Sunday, it made him one of two players in league history to reach the 500-touchdown milestone. Brett Favre, who holds the NFL record with 508 touchdown passes, is the other.

It meant Manning also reached the milestone in just 244 regular-season games. He also finished with a career-high 479 yards passing and four touchdowns in Denver's 41-20 victory over the Arizona Cardinals.

Manning added to his total in the second quarter, when he hooked up with Demaryius Thomas on a pair of touchdown passes. The second scoring strike to Thomas went for 86 yards, tied for longest touchdown pass of Manning's career, according to ESPN Stats & Information.

Manning also threw a 12-yard touchdown to Julius Thomas in the fourth quarter, which gave him 503 for his career.

"Throwing touchdowns is a part of playing football," Manning said. "But I guess for me, throwing touchdowns has helped teams I've been a part of win a lot of football games. I don't think I've thrown a lot of touchdowns that didn't mean something. Any time you have a big lead, all the years I played in Indianapolis, the coaches would always take us out, and if we were getting bad they'd take us out, so any ones that I've thrown usually resulted in our team trying to win the game or win the game, so I think about it that way."

Manning has now thrown 104 touchdown passes for the Broncos since he signed with the team before the 2012 season, after he had thrown 399 touchdown passes in the regular-season in his tenure with the Indianapolis Colts. Through the week, and as Favre's mark gets closer, Manning has tried to keep the discussion on football.

Following the game, Manning did allow himself at least some time for some reflection.

"I do think about how many people have helped throughout my career with something like that and just how grateful I am for that help and support," Manning said. "Football is the ultimate team game, and so I guess one man kind of has to accept it, but I kind of accept on behalf of a lot of coaches and teammates."

"My hat's off to Peyton," Arians said following the game. "He played a great game."

"You take a couple moments, and you go down memory lane a little bit," Manning said. "Don't think there are any players still playing from when I threw my first touchdown, but I think it was kind of interesting that two coaches on the Arizona sideline were there for my first game when I threw my first touchdown -- Tom Moore and Bruce Arians -- I give both of those men a lot of credit for helping me improve as a quarterback."

Manning, not one to keep footballs as career mementos, said he would try to find a place for the 500th touchdown before his 3-year-old son Marshall got a hold of the ball. Manning and his wife, Ashley, have two children, twins Marshall and Mosley.

"I've never kept a football, mainly because the receivers have kept them," Manning said. "I'll probably keep it in bag somewhere, have a little piece of tape around it, it'll have some kind of mark up until Marshall grabs and goes out and plays with it in the mud before too long."