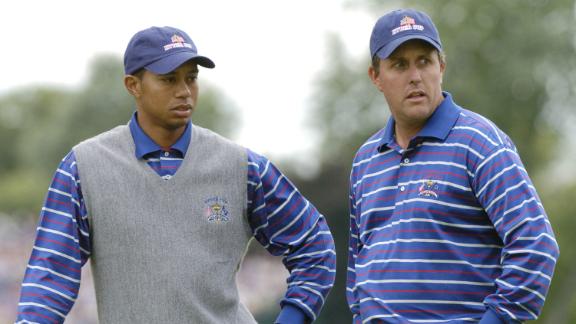 CHASKA, Minn. --Phil Mickelson decided to set the record straight about his ill-fated pairing with Tiger Woods for two matches during the 2004 Ryder Cup at Oakland Hills Country Club in Bloomfield Township, Michigan.

He didn't hold back.

Mickelson, who is playing in his 11th consecutive Ryder Cup, was asked at a news conference Wednesday how important the captain is to the success of the team.

"It all starts with the captain," said Mickelson, who soon after went on to criticize the 2004 decision of U.S. captain Hal Sutton to put him and Woods together for two matches on the first day of the Ryder Cup.

"We were told two days before that we were playing together," Mickelson said at Hazeltine National prior to a practice round for this week's Ryder Cup. "And that gave us no time to work together and prepare."

However, 24 hours after making those comments, Mickelson moved to clarify his remarks and apologized to Sutton. Mickelson said he called Sutton on Wednesday night to apologize and told Golf Channel that his comments were "in bad taste" and "came across like it was a personal attack, and I didn't mean it that way."

"I've communicated with him. I feel awful. It was never meant to be like that," Mickelson said. "I was trying to use an example of how a captain can have a strong effect. Unfortunately, it came across the way it did.

Mickelson and Woods were a surprise team at that Ryder Cup, losing their best-ball match to Colin Montgomerie and Padraig Harrington 2 and 1. Woods and Mickelson combined for five birdies, but they were still defeated.

The real problem was the afternoon match, when they were asked to play alternate shot against Darren Clarke -- this year's European captain -- and Lee Westwood. The match went to the 18th hole, where the Europeans won 1-up despite making a bogey.

In alternate shot, you play with one ball, and that was the issue, Mickelson said.

"[Woods] found out the year before when we played at the Presidents Cup in 2003 that the golf ball I was playing was not going to work for him," Mickelson said. "He plays a very high-spin ball and I play a very low-spin ball, and we had to come up in two days with a solution.

"So I grabbed a couple dozen of his balls, I went off to the side and tried to learn his golf ball in a four- or five-hour session on kind of an isolated -- one of the other holes out there trying to find out how far the ball goes. And it forced me to stop my preparation for the tournament, to stop chipping and stop putting and stop sharpening my game and stop learning the golf course in an effort to crash-course and learn a whole different golf ball that we were going to be playing.

"In the history of my career, I have never ball-tested two days prior to a major. I've never done it. It doesn't allow me to play my best. What allows me to play my best is to learn the course, sharpen my touch on the greens, sharpen my chipping out of the rough and ball striking and so forth.

"Instead, I'm taking four or five hours, and I'm out trying to learn another ball to allow us to play our best. Had we known a month in advance, we might have been able to make it work. I think we probably would have made it work. But we didn't know until two days prior."

Sutton's decision to put Mickelson and Woods together was heavily criticized in the aftermath of what was the worst U.S. Ryder Cup defeat at the time, an 18 to 9 loss. The U.S. trailed 6 to 1 after Day 1 and never recovered. Mickelson went 1-3 at that Ryder Cup, and Woods was 2-3.

In the seven Ryder Cups they have both played, that is the only time Woods and Mickelson have been paired together.

"I find it amusing that that's an issue at the 2016 Ryder Cup," Sutton said in an interview with reporters from GolfWorld and Golfweek. "I think Phil better get his mind on what he needs to have it on this week instead of on something that happened 10 years ago."

Sutton, a 14-time winner on the PGA Tour, said he felt it would be good for the game if Woods and Mickelson played together and had success, given their sometimes frosty relationship to that point.

"You know, Arnold [Palmer] and Jack [Nicklaus] didn't start out to be the best of friends," Sutton said. "There was kind of a dethroning going on there. They ended up being great friends. I felt like the world of golf would be better off if Tiger Woods and Phil Mickelson became friends, and I felt like if they played together, had fun and beat somebody, they would end up being friends.

Mickelson, who has won five major championships, including his first earlier that year at the Masters, was trying to make the point that a captain plays a large role in success at the Ryder Cup and that lack of input from the players has hurt the Americans over the years.

The U.S. is 2-8 in the past 10 Ryder Cups, with Mickelson making every one of those teams.

"I'm not trying to knock anybody here," Mickelson said. "I actually loved how decisive Captain Sutton was. I feel like that's a sign of great leadership, to be decisive. Had we had time to prepare, I think we would have made it work and could have had some success.

"But that's an example of starting with the captain, that put us in a position to fail, and we failed monumentally, absolutely. But to say, well, you just need to play better; that is so misinformed because you will play how you prepare."

Mickelson was clearly anxious to go deep on the subject, as he has often been criticized for his poor Ryder Cup record (16-19-6) and what has been perceived as a lack of leadership on his part. Woods is 13-17-3.

"I've had to be accountable for that decision 12 years ago," Mickelson said. "Even a month ago, I hear there's an analyst on the Golf Channel that accuses me of being a non-team player for having to go out and work on an isolated hole away from the team, away from my preparation.

"And I've had to be accountable for that decision of which I was not part of. That's a very frustrating thing. I don't know if you can imagine how frustrating it would be to care so much about something like I do about the Ryder Cup and be accountable for many of the decisions that have taken place when you're not a part of those decisions, and that's what I'm talking about, ownership.

"This is ... one of the first years [the players have been given a say]. But we start over every two years, [and that] has been the problem. We haven't built on anything and had the continuity, and none of our captains have been vice captains except for one over the 20 years, and we haven't had that and we are starting that, and it's exciting to be a part of it."

Sutton noted that Mickelson had switched equipment companies that week without telling him -- one of the reasons cited for his poor play -- and that the aftermath of the loss affected him personally.

"I pretty much quit golf after that," Sutton said. "I took the blame for everybody. Nobody played good that week. It's tough on a captain when people don't play well. It's hard to beat anybody.

"If I still need to shoulder the blame for Phil's poor play, then I'll do that."