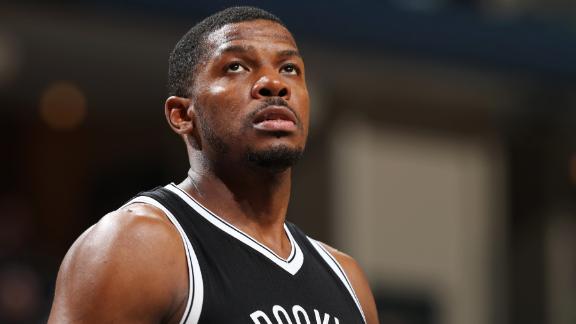 The Detroit Pistons have reached out to the Brooklyn Nets to inquire about the availability of former All-Star swingman Joe Johnson, according to league sources.

Sources told ESPNNewYork.com that no deal is imminent but said the teams have had exploratory discussions in advance of Thursday's trade deadline about a trade package built around injured point guard Brandon Jennings and expiring contracts in exchange for Johnson.

The Nets, sources said, are fielding inquiries this week on both Johnson and Brook Lopez but could well elect to keep their current core intact after exploring their trade possibilities with Johnson, Lopez and former All-Star guard Deron Williams dating to December.

Jennings, 25, underwent surgery to repair his torn left Achilles in late January and is out for the remainder of the season. He was averaging 15.4 points and 6.6 assists. Jennings is due $8 million this season and $8.3 million next season, the final year of his deal.

Based on his past quotes, Pistons coach Stan Van Gundy has an affinity for Johnson.

In an interview with USA Today in January 2013, Van Gundy called Johnson "under-appreciated."

The NBA trade deadline is Thursday at 3 p.m. ET. Van Gundy recently told reporters in Detroit that he would be willing to pull the trigger on a big move, though the Pistons would have to get a star player in return.

"Yeah. But again, depending on what you have to give up," Van Gundy said, according to MLive.com. "We don't want to be making sacrifices down the road. "If it was a matter of just spending more money, yes, we definitely would. But if it's a matter of us giving up what we think are valuable assets, and it was just for a rental for the rest of the year, probably not."

Sources told ESPN.com back in December that the Nets made it known to other teams that Johnson, Lopez and Williams were all available via trade.

The Nets, who have the NBA's highest payroll at around $90 million and are on pace to pay approximately $20 million in luxury taxes, went into the All-Star break 10 games under .500 and are 5-23 against .500 or better teams (at time of game played).

Both Brooklyn and Detroit are on the outside of the Eastern Conference playoff picture looking in. The Nets (21-31) are in ninth place, while the Pistons (21-33) are tied for 11th. But both teams are well within striking distance of eighth-place Miami (22-30) and seventh-place Charlotte (22-30).

Pistons Inquire About Johnson
Chris Broussard discusses the chances of Nets guard Joe Johnson getting traded to the Pistons.