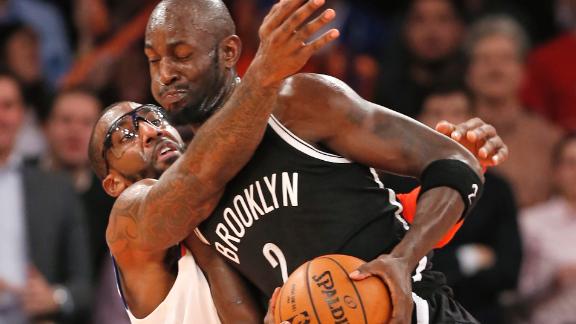 NEW YORK -- A popular Nets fan was taken out of Madison Square Garden by security without his prosthetic leg during Brooklyn's 98-93 victory Tuesday night over the New York Knicks.

Jeffrey Gamblero -- known by fans at Barclays Center for his neon shirts and dance moves often featured on arena video screens -- was carried off by two security guards. The scene was captured on video and quickly published to the Internet.

"An unruly fan was ejected after MSG security received multiple complaints from fans sitting in that area," the Knicks said via a team spokesperson. "The fan was warned multiple times before being removed. He will not be permitted back into Madison Square Garden."

One fan, who wished not to be identified, said the ousted Nets fan "was being obnoxious and yelling."

"People were complaining," the fan said. "The security surrounded him and carried him out without his leg. I've never seen anything like that."

Gamblero's real name is Jeffrey Vanchiro. He is an accomplished poker player and graffiti artist in Brooklyn.

In an interview with The New York Times, Vanchiro said he lost the lower part of his left leg in an accident and has had a prosthetic leg ever since.

Attempts to reach him Tuesday night were unsuccessful.