Pujols, Hamilton back for Angels 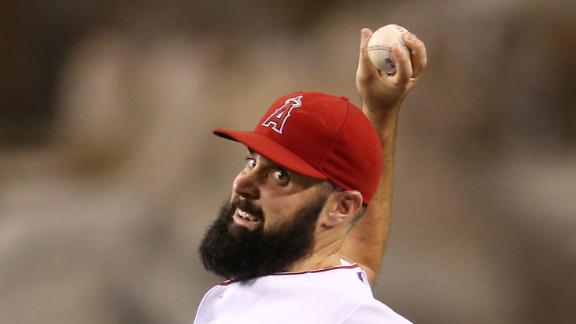 Albert Pujols was in the Los Angeles Angels' lineup Tuesday one day after leaving a game early with a cramp in his left hamstring and so was Josh Hamilton, who is returning after missing 11 games with a shoulder injury.

Matt Shoemaker, meanwhile, was expected to miss at least one turn in the rotation because of a mild strain on his left side.

Angels manager Mike Scioscia revealed the injury updates Tuesday, one day after his team became the first in the majors to clinch a playoff spot this season.

Pujols is playing first base and batting third while Hamilton is batting sixth as the designated hitter Tuesday against the Seattle Mariners.

On Monday night, Pujols wrote off the cramp to dehydration on another hot day in Orange County, and had said he expected to play Tuesday.

Hamilton is returning a day earlier than expected. On Monday, manager Mike Scioscia said he considered Hamilton's workout a "breakthrough" and had expected him to return as the DH on Wednesday night.

Shoemaker, who has set a franchise rookie record with 16 wins, was removed from Monday night's 8-1 victory over the Mariners after 7 2/3 innings and had an MRI. He is 7-0 with a 1.29 ERA in his last eight starts since losing 2-1 to the Dodgers on Aug. 6.

In 20 starts overall, the right-hander is 14-3 with a 2.89 ERA after beginning the season in the bullpen.

Information from The Associated Press is included in this report.