Rafael Nadal cruises to first-round win at US Open 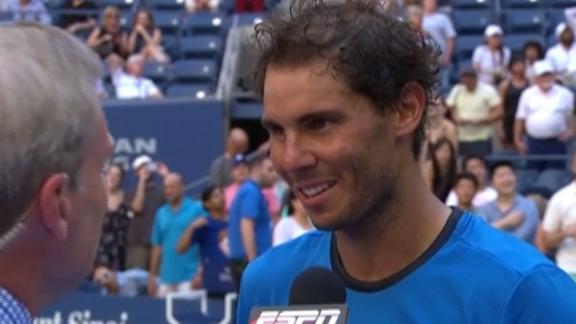 Nadal's first-round victory in Arthur Ashe Stadium on Monday was straightforward. He produced 14 of his 21 winners via his forehand, which showed little sign of being troubled by a wrist he says is still not completely healed.

Nadal hadn't played at a major since winning his second-round match at the French Open on May 26. He then withdrew from Roland Garros before the third round and sat out Wimbledon because of the problematic wrist.

Cilic, the seventh seed, is coming off his first Masters title, beating Andy Murray in the final at Cincinnati.

The 21-year-old Edmund, ranked 84th, had 40 winners, 21 on his forehand. He has twice made it to the second round at the French Open.

Said Gasquet, the 2013 US Open semifinalist, hadn't lost in the first round at a major since 2010 at Roland Garros: "Not sure I could do worse."