Raiders cut Sean Smith; CB to be sentenced to prison for assault 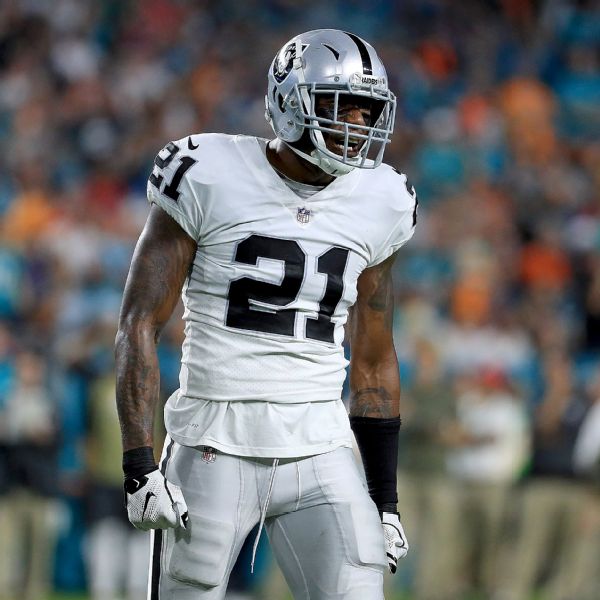 ALAMEDA, Calif. -- The Oakland Raiders releasedSean Smithamid news that the cornerback will plead guilty to a felony assault charge Tuesday and be sentenced to one year in prison.

Smith's legal issues stem from an incident with his sister's boyfriend last summer in Pasadena, California. Smith has agreed to plead guilty to a felony charge of assault with great bodily injury and will be sentenced to one year in prison and three years of probation, the attorney for the alleged victim confirmed to The Associated Press.

Smith, 30, was accused of assaulting his sister's then-boyfriend, Christopher Woods, on July 4. Two witnesses testified during a preliminary hearing in December that Smith stomped Woods' head as he lay bleeding and unconscious.

Attorney Jonathan Dennis said Woods "felt the sentence, obviously, was not as strict as it should have been, but he's pleased he's admitting guilt.''

The Raiders' move to release Smith saves the team $8.5 million on their salary cap. Entering Monday, Oakland had more than $16.5 million in salary-cap space, per ESPN Stats & Information. Smith was due base salaries of $8.25 million in 2018 and $8.75 million in 2019.

After signing a four-year, $38 million free-agent contract with the Raiders in 2016, Smith struggled immediately, getting benched at New Orleansin the season opener. Last season, he lost his starting job to TJ Carrie before becoming one of the Raiders' better defenders in the last month of the season.

"Nothing has changed on my end," Smith told ESPN the last week of the season. "I guess I'm just on the field more."

Smith's two interceptions against the Dallas Cowboys on Dec. 17 led the Raiders, who had only five picks on the year. He said he was only on the field in certain packages early in the season and could not get into the flow of a game as a result.

Smith, who played in 29 games (23 starts) in two seasons with the Raiders, had four interceptions for Oakland and is the second high-priced veteran cornerback released by the Raiders this offseason, joining David Amerson, who was released last month. Amerson later signed with the Kansas City Chiefs.

Oakland is relying on last season's first-round pick, Gareon Conley, to fill the void at cornerback as he returns from a shin injury that limited him to two games. Carrie is a free agent.

A veteran of nine seasons, Smith has also played for the Miami Dolphins and Chiefs and has 14 career interceptions, 102 passes defensed and 424 tackles.

Newhouse, 29, started 14 games at right tackle for Oakland in 2017 after signing a two-year contract with the team last offseason.

"There's a lot of change going on over there," he told ESPN's Josina Anderson. "Outside of [GM] Reggie [McKenzie], no one else familiar with me there. I'm a good pro and teammate. I have a lot of flexibility to live wherever in the country. I'm still young and healthy."

Newhouse has appeared in 100 games (70 starts) in his career with the Green Bay Packers, Cincinnati Bengals, New York Giants and Raiders.